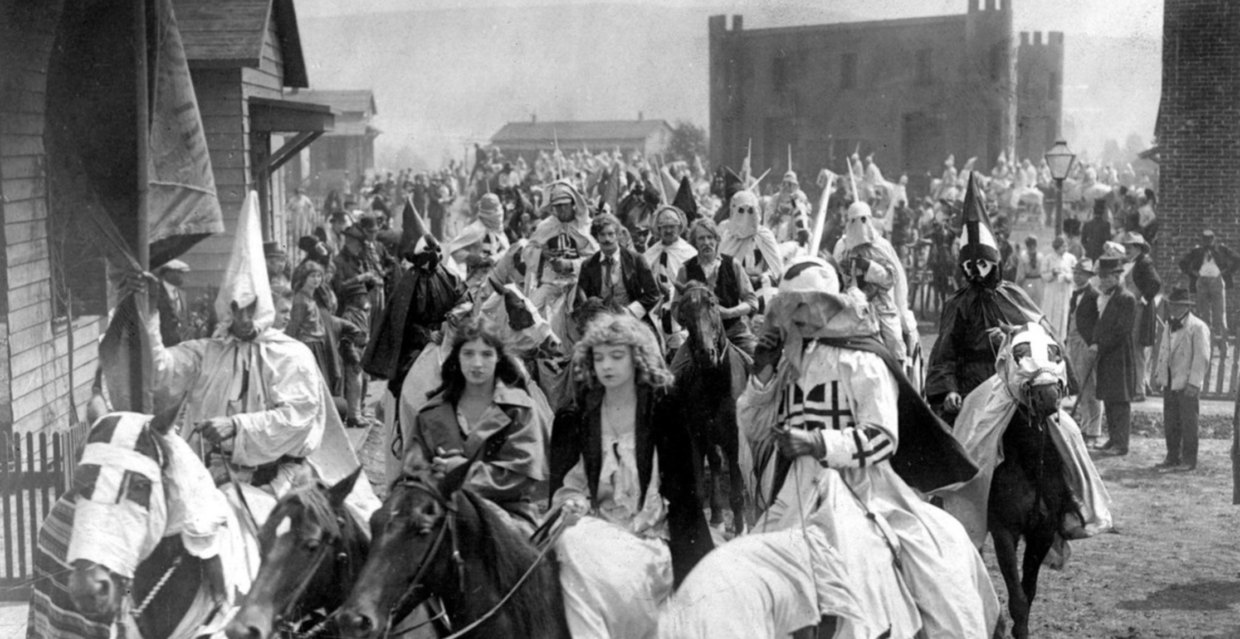 The Birth of a Nation
VIA Bloomsbury

Masked Men Who Take the Law into Their Own Hands

When innocent people are brutalized, villains go unpunished, and corrupt police fail to act, a hero must rise to save the country he loves. His secret identity hidden behind a mask, the Grand Dragon leads his team of loyal companions in a battle to restore law and order.

This plot structure is familiar to anyone with a passing awareness of superhero formulas, but the specific hero, the Grand Dragon, is unknown except to readers of Thomas Dixon, Jr.’s once bestselling novel, The Clansman: An Historical Romance of the Ku Klux Klan. Dixon, while claiming to have taken no “liberty with any essential historical fact,” recounts a version of the post-Civil War period in which the heroic Klan rescues the victimized South from the villainy of “Negro” rule. Although Dixon is “relatively unknown today,” and “no longer deserving of respectful prominence in the history of American popular culture,” biographer Anthony Slide likens him to John Grisham as an author who once commanded a major American audience. Dixon’s 1905 novel became the source for D. W. Griffith’s more enduring but equally racist adaptation, The Birth of a Nation, a film so influential that it incited the reformation of the Ku Klux Klan (KKK) with its 1915 release. Although both Dixon and Griffith’s white supremacist rewriting of history is now reviled, their masked vigilantes entered the American consciousness as admired figures, and the Klansmen’s characteristics—as introduced by Dixon, adapted by Griffith, and also emulated by actual KKK members across the U.S.—shaped comic book superheroes.

Working in a different medium more than three decades after Dixon, Siegel and Shuster, two young urban Jewish men of immigrant parents, were anything but sympathetic to Klan ideology. But by the mid-1930s, KKK hero tropes had been absorbed into popular culture, distanced from their white supremacist roots, and reproduced as generic formula in pulp adventure fiction. Ben Cameron, a.k.a the Grand Dragon, represents the earliest 20th-century incarnation of an American vigilante hero who assumes a costumed alias to hide his identity while waging his war for good—the formula adopted by Siegel and Shuster, the creators of Superman.

Dixon did not invent the figure of the costumed superhero, but the character type—as traced from The Clansman through The Birth of a Nation and the second Klan to pulp fiction and early comic books—was popularized by Dixon’s vision. The superhero, despite the character’s evolution into a champion of the oppressed, partly originated from an oppressive, racist impulse in American culture, and the formula codifies an ethics of vigilante extremism that still contradicts the superhero’s purported social mission.

“The superhero does not simply save the world—he restores a moral, nationalistic status quo.”

Numerous writers have drawn likenesses between superheroes and the KKK. After noting the criminal need for disguised identities, specifically referencing “the Ku Klux Klan and its hooded cross burners,” Danny Fingeroth observes how the “idea of disguise” is “a staple, indeed one of the very definitions of the superhero mythos”; however, Fingeroth only superficially links superheroes with the Klan in a list of disguised identities that includes graffiti artists and crank callers. Bradford W. Wright observes that some of the very first critiques of superheroes recognized their vigilantism and how their violence was portrayed as supposedly essential to society. “The lawful processes of police and courts have disappeared,” objects James Frank Vlamos, in a 1941 American Mercury editorial, and “only the heroism of the superhero keeps us from being annihilated”; the superhero “is a law unto himself.” When Hal Blythe and Charlie Sweet analyzed comic book narrative structures 40 years later, they came to the same conclusion: the initiating “menace is so powerful it is more than the victim, the authorities or society can handle. The Commissioner Gordons of the world, realizing their impotence in the face of the overwhelming threat, summon the superhero.” Accordingly, the “reader does not care how often the superhero transgresses man’s petty laws, for the hero operates under a higher law that always has the ultimate good of society at its center.” Mike S. Dubose examines comic book vigilantism in relation to Reagan-era political conservatism, concluding that “true heroship did not occur without defining oneself as an entity separate from the powers that be and transcending traditional notions of law, order, and justice.” Dubose limits his discussion to the 1980s, but his description applies equally to the Dixon-era Klan and to the superhero in most of its evolving incarnations.

After observing that “the superhero is a kind of criminal—a vigilante,” Geoff Klock concludes that:

masked crime fighters differ from the Ku Klux Klan only in that they are usually afforded socially acceptable status on a large scale. As masked men who take the law into their own hands the superhero comes dangerously close to some of the great evils in American history.

The difference that Klock asserts, however, is historically inaccurate. The KKK was, in fact, afforded socially acceptable status on a very large scale. It operated on the same principle that Blythe and Sweet articulate for the superhero: overstepping lawful processes to combat perceived menaces for the supposed good of society. As a result, the Klan rose to national popularity in the early 1920s, receiving the same favorable status that Klock attributes to the later, fictional character type. Sean McCann cites an example of a pro-Klan short story published in Black Mask magazine in 1923 in which members rescue a kidnapping victim and are lauded by a sheriff for their mission “to do good—even with violence.” Historian Richard K. Tucker details the similarly positive reaction the Klan received nationwide:

Mainline Protestant ministers often praised the Klan from their pulpits. Reformers welcomed it to vice-ridden communities to “clean up” things. Prohibitionists and the Anti-Saloon League supported it as a force against the Demon Rum. Most of all, millions saw it as a protection against the Pope of Rome, who, they believed, was threatening to “take over America.”

Vice-ridden communities and plots to conquer America became and remain central motifs of superhero narratives, and the superhero’s ability to act outside of the law, superseding an impotent government’s police powers, is one of the character type’s most defining qualities. The other primary traits—mission, secret identity, masked costume, and self-defining emblem—are also elements portrayed by Dixon and inherited by the superhero via Griffith and the 1914–44 KKK.

The second Klan was critically different from both the Reconstruction-era organization and the Klan that rallied against the civil rights movement of the 1960s. Whereas the post-Civil War and post-World War II groups directed their actions primarily against African-Americans, the second Klan—while still virulently racist and violent—represented a wider range of prejudices and political agendas embodied in the eugenics movement. “These Klansmen,” writes Jesse Walker, “were more likely to flog you for bootlegging or breaking your marriage vows than for being black or Jewish.” Identified with traditional, rural morality, the second Klan embodied a cross-section of American middle-class racial and ethnic anxiety, focused primarily against a perception of urban crime, corruption and expanding immigrant populations. Both national and nationalistic, the organization was defined by a Victorian nostalgia for pre-modernist, authoritarian order that reached far beyond the vision of its Southern, Reconstruction-era namesake. The new, larger and eugenics-fueled Klan imagined that it “fought to restore the values of an earlier America.”

Although the Klan, when directly portrayed, is invariably an organization of villains, the superhero still operates from the same reactionary, paternalistic ethics of vigilantism. The superhero does not simply save the world—he restores a moral, nationalistic status quo by superseding the powers of a democratic government incapable of combating or often even recognizing alien threats.

Even when superheroes are depicted as battling for liberal, anti-discriminatory values, the mass appeal of the character is found in its ability to reduce complex social anxieties into terms of absolute good and evil. Whatever the specific story content, the formula remains centered on romanticized vigilantism, still one of the most defining traits of contemporary superhero comics. 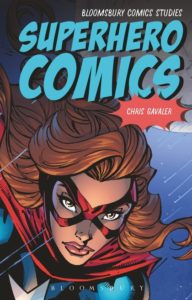 From Superhero Comics. Used with permission of Bloomsbury. Copyright © 2017 by Chris Gavaler.

Chris Gavaler is Assistant Professor of English at Washington and Lee University, USA. He is also the author of On the Origin of Superheroes: From the Big Bang to Action Comics No. 1 (2015).

10 Songs for Franz Kafka's The Trial

Kaveh Akbar: "Bewilderment is at the Core of Every Great Poem" 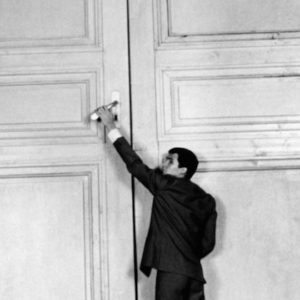 10 Songs for Franz Kafka's The Trial

"The essence of my unmusicalness," wrote Franz Kafka in his diary, "consists in my inability to enjoy music connectedly;...
© LitHub
Back to top
Loading Comments...