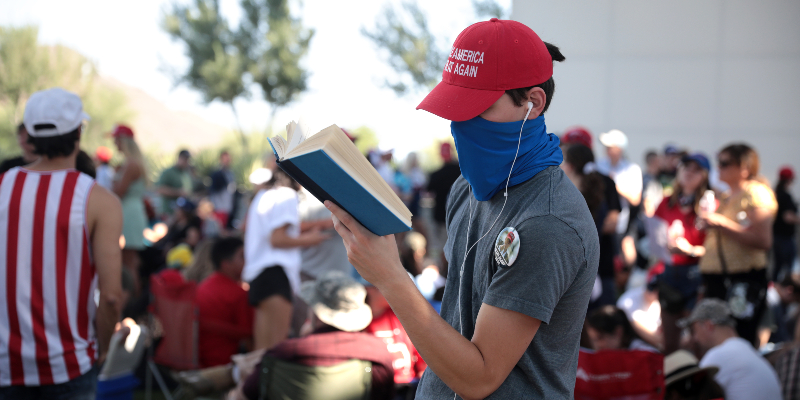 On today’s episode, Cynthia Miller-Idriss discusses her new book, Hate in the Homeland, and how the far right has managed to position itself as the counterculture for today’s youth.

Andrew Keen: You’ve written about the boogaloo boys, who have become the kind of media pinup for this new right-wing radicalism. Who are these people? It’s a very clever meme. I don’t know whether it’s very clever in practice.

Cynthia Miller-Idriss: The boogaloo is a perfect example of what I mean by the kind of youth-driven phenomenon. It started as a joke online, among teenagers, that connected the idea of a second civil war back to the idea of a bad 1984 breakdancing movie that had been so widely panned for being too similar to the original, that they basically compared it to something like a second civil war. And it had the word boogaloo in it. So that term became referenced as boogaloo, but eventually that concept motivated real-life action among adults, not just teenagers.

And so you saw, starting really in January in Richmond with the Second Amendment protest, but then in the shelter-in-place protests and then the Black Lives Matter protests over the summer, we had a number of boogaloo-type militia events that are calling for protests against government tyranny, calling for revolution, using revolutionary iconography and images, using Hawaiian shirts because it’s a big luau, sounds like boogaloo, and that references a luau where there’s pig roasts, and violence against the police as a slur incorporated into that. So a number of ways in which that meme evolved and continues to evolve. But I think one of the important things is that it did mobilize people to come out in the street in large numbers and protest and threaten violence. You can’t just write them off as as kids joking online or as just internet trolls. What they do has consequence for real-life action and potential violence.

Andrew Keen: The gender question, of course, comes up here. Boogaloo boys; they’re not boogaloo girls. I know there are some girls who follow them. I just saw a recent poll that suggested that in Iowa, which is the heartland, I guess, of America, very symbolic, Trump is 21 points up with the men and Biden’s 20 points up with women. Is this rise of this new right-wing radicalism, is it a manifestation of a certain crisis of maleness in the post-industrial, globalized world? I know that’s a broad question, and I know for sociologists, they can spend their careers investigating it. But is there something here about this profound shift in our notions on gender and the way in which many men, particularly working class white men, have been marginalized by our culture?

Cynthia Miller-Idriss: Well, first, one important thing to note is that women’s participation in the far right is increasing and has increased. We have seen that both within the leadership of far right elected parties across Europe and then even in the kind of softer forms of entry for the so-called alt right, the YouTube videos that are run by women promoting homesteading and home schooling and being a good traditional wife.

Andrew Keen: And the anti-vaxxers, as well as QAnon.

Cynthia Miller-Idriss: Yeah, and this blend of the anti-vaxxers and QAnon and these strange coalitions that are forming, women shouldn’t be dismissed for the role that they play. Even in the violent fringe, we’ve seen some recent arrests on the part of terrorists who included women in the cells. But obviously, still, the vast majority of violence and the vast majority of participation in these groups are men, are led by men, are caused by men.

I think there’s a couple different things going on. One is the growing, as you said, crisis, whether that’s a crisis of masculinity, or the ways in which these groups market themselves to a kind of masculinity in a heroic engagement, in defense and restoration and protection and saving one’s people or one’s territory, one’s race, one’s land, all of those kinds of things. Brotherhood, being a soldier, being a warrior. All of that iconography, symbols, messages are incredibly strong in these movements.

But there’s also a lot of intersections in ways that I think haven’t been paid attention to for a long time and are now starting to between the world of men’s rights and misogynist movements and white supremacist and other far right movements. Gradually people started to realize in law enforcement, intelligence communities, and also analysts, as we started seeing shooter after shooter show up at a yoga studio or a sorority or wherever it was, and then later, it turns out that some of those manifestoes did have also racist or white supremacist ideas in them. There are more intersections in these spaces than people have really acknowledged. Why that is right now, at a moment when we also have resurgent homesteading, retreat to desires for simpler life, a desire to return to some kind of way to “make things great again,” let’s say, all of that harkens back to this kind of traditional sense of some fantasy idea about what things used to be like, say, in the 1950s.

Cynthia Miller-Idriss is professor of education and sociology at American University, where she runs the Polarization and Extremism Research and Innovation Lab (PERIL). She is the author of The Extreme Gone Mainstream: Commercialization and Far Right Youth Culture in Germany (Princeton) and Blood and Culture: Youth, Right-Wing Extremism, and National Belonging in Contemporary Germany. She lives in Washington, DC.

With all the good books that come out each month, it can be hard to decide what to read (or, if you’re anything like the people...
© LitHub
Back to top