Laura Lindstedt on the Different Ways We Read a Book

To all intents and purposes, a psychoanalyst’s couch is in fact a bed—after all, it lacks a back and armrests. And yet, this item of furniture must be called a couch. Nobody would offload their traumas on a psychoanalyst’s bed unless, that is, they were in a relationship with said psychoanalyst.

In October 2019, I found myself sitting in the Silencio recording studios, headphones over my ears, reading aloud my novel My Friend Natalia, which had been published in Finland six months earlier.

“‘Natalia’ was one of my first clients to lie on her back without prompting,” I read and continued: “When I showed her round my office, which I had rented in an apartment next to my house, I told her about the couch.”

These two consecutive sentences are from the opening chapter of the novel. Reading these sentences aloud irrevocably sprained something in my brain.

When one reads a book aloud as an audiobook, the visual aspects of the text all disappear. Of course, one could read the word couch, which appears in italics, in a slightly different way, perhaps by holding a short, artistic pause before the word. But this is not the same thing. Italics are not the same as a short pause.

The therapist, the book’s narrator, gives the patient the code-name “Natalia.” Under the cover of this anonymity, the therapist then proceeds to divulge intimate details of Natalia’s life to the reader, then at one point removes the inverted commas from Natalia’s name “as I might remove the safety catch from a gun”. When read aloud, this sentence is absurd: the listener cannot hear the inverted commas around Natalia’s name.

Let’s be clear: I am very skeptical about the practice of turning works of literature into audio recordings.

If audiobooks become the primary way in which we interact with books, it would be strange if at some point this did not have a direct impact on how people write literary works.

Will writers—either consciously or subconsciously—start writing books so that they sound good when read aloud?

Will writers—either consciously or subconsciously—start writing books so that they sound good when read aloud? The succinct speech between Me (the writer) and You (the reader) works well when spoken aloud, so the current appetite for autofiction is unlikely to dwindle any time soon. A linear narrative, in which we already know (or think we know) something about the end point, is also easy to listen to. For this reason, celebrity autobiographies and so-called true stories make for successful audiobooks.

However, complex narrative structures, shifting perspectives, narrative polyphony, long, meandering sentences and the visual aspects of a text find themselves increasingly under threat from a medium that relies solely on hearing. If linear narrative becomes the only acceptable form of complex literary expression, our thoughts will be the poorer for it. Imaginary worlds and possibilities will shrink because such worlds and possibilities are not “content” that can be detached from “form,” they are not statements, suggestions or questions isolated from their rhetorical devices.

That being said, I’m not a militant opponent of audiobooks. To my mind, it is simply important to recognize that there is a significant difference between the printed book and the audiobook. Written material turns into vibration, letters become sound waves. They always come from a concrete source that guides our interpretation, a source that is completely different from the reading process heard through our “inner voice.”

A new element appears between the book and its recipient: a voice that shapes how we receive the text. It is a sound born of a human body in a unique way and that is (generally) readily identifiable as the voice of a man or a woman.

In the audiobook of My Friend Natalia, this unavoidable fact becomes a poetic problem in its own right. Throughout the text, I have scattered conflicting clues as to the sex of the therapist, the novel’s first-person narrator, but I was careful never to define the therapist as either a man or a woman. With certain exceptions, in many languages a writer and a translator can easily disguise or at least avoid the matter of the narrator’s sex. A writer can also play with this ambiguity, as is the case in my novel My Friend Natalia.

I’m not a opponent of audiobooks; it is simply important to recognize that there is a significant difference between the printed book and the audiobook.

Some readers have been convinced that the narrator is a man, others have considered the therapist a woman. Several readers have told me that their perception of the matter changed as they were reading. Readers always read a text through the prism of their own experiences, preconceptions and cultural stereotypes.

For this reason, I wanted to read the Finnish audiobook of My Friend Natalia myself. I am a woman, but because I am the book’s author my voice is above all an authorial voice, and in this way I feel I managed to resolve the dilemma described above.

But my relief was somewhat premature. I was once again forced to confront this matter in early 2021 when Penguin Random House Audio began to produce the English-language audiobook of David Hackston’s translation of My Friend Natalia (W.W. Norton/Liveright).

PHR Audio’s producer kindly sent me a number of audio samples to listen to. All these samples were very professional and of the highest quality, but still they were unsuitable for my novel’s narrator. I started to lose hope. Was it at all possible to find an actor whose voice was neither that of a man nor a woman, a voice that wasn’t too young as it should be a voice that conveys the therapist’s wealth of professional experience? The voice also needed dash of pompous embitterment, stemming from the fact that nobody seems to value the therapist’s subtle genius.

But we were lucky, and eventually we found an excellent voice, that of the actor TL Thompson, who identifies as non-binary and whom I chose as the English-language reader for My Friend Natalia.

Thompson’s voice is characterful, mesmerizing and unforced. To my own ear, Thompson’s voice sounds more masculine than feminine, or perhaps it’s the whisky baritone of an elderly lady. However, the voice is not remotely “gender-neutral,” a voice-type that we tried to look for at first and whose very existence I have seriously begun to doubt. Thompson’s voice made every sentence oscillate between the two. I have not written such oscillation into my novel, let alone a gender-neutral narrator’s voice: the question of the therapist’s identity opens up—if, indeed, it opens up at all—when readers find themselves indulging in assumptions that the text does not affirm.

I can say quite whole-heartedly that I love Thompson’s reading. Yet in the same breath, I must reiterate what I have already said: an audiobook is a different entity from a printed book.

For me, the act of interpretation is specifically that of thinking with the book. It requires stops, pauses, flicking through the pages, making notes in the margins. The book takes on markings, layers that are missing from digital products, which are perpetually new.

We can browse with our eyes but not with our ears; the ear is more sensitive to chaos and clamor than the eye.

We can browse with our eyes but not with our ears, as my partner, who works with sound, would put it. The ear is more sensitive to chaos and clamor than the eye. Sound operates like a one-directional timeline, a surge that is hard to control. A detailed auditive perception of a large space is simply impossible.

It is to these very layers that I return when trying to form an understanding of the kind of book I am reading. I can easily locate markings I have made by flicking through a book, even if it is a book I read 20 years ago.

The various temporal strata of my home library provide a shadow story of what has touched me and who I have been throughout my reading life. Last summer I awoke to the immeasurable value of these little scribblings when going through my grandmother’s estate after she died at the age of 100. From the collection of religious books, treatises and notebooks, I saved those in which my grandmother had left some kind of mark—and exclamation mark, a line under a section of text, or a Biblical verse in the margin. These markings reveal not only what touched her and who she was; they also say a lot about where I have come from, what kind of supra-generational reality I carry with me. 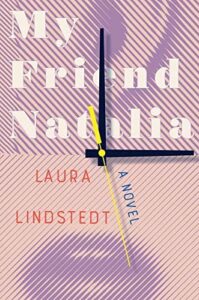 My Friend Natalia by Laura Lindstedt and translated from the Finnish by David Hackston is available now from Liveright.

Laura Lindstedt is the author of Oneiron, winner of the Finlandia Prize—the country’s highest literary honor. Her works have been sold in eighteen countries. She lives in Helsinki, where she is revising her PhD thesis.
David Hackston is a British translator of Finnish and Swedish literature and drama. His translation of Pajtim Statovci’s Crossing was a finalist for the National Book Award. 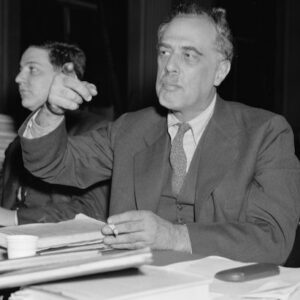 On December 26, 1933, Henry Alsberg sat at his typewriter and banged out a letter. He was 52 years old—four months older...
© LitHub
Back to top
Loading Comments...