How Stolen Cultural Artifacts Made Their Way to a Major Museum

Stefan Koldehoff and Tobias Timm on Art and Crime

By Stefan Koldehoff and Tobias Timm

The Polaroids were a problem for Giacomo Medici. It all began in October 1994 in Pullach, a municipality outside Munich. Actually, the German and Italian police were only looking for clues in connection with eight Hellenic terracotta vases that had been stolen nine months earlier from the castle museum in the small city of Melfi in Southern Italy. What the investigators found led to the discovery of the biggest antiquities smuggling scandal in modern times, a scandal that shook the very foundations of the museum world. In the villa in Pullach, the investigators came upon documents that quickly put them on the trail of the art dealer Giacomo Medici and his Swiss company, Éditions Services.

Eleven months after the discovery in Pullach, three Swiss and three Italian police officers, a Swiss judge, and an officially commissioned photographer stood before room 23 in hallway 17 on the fifth floor of the warehouse in Geneva’s freeport, search warrant in hand. When the port director opened the door, the investigators found mountains of photographs, armoires filled with antique art objects, and a safe, a meter and a half tall, which housed the most valuable pieces. The number of prints, negatives, and Polaroids alone in the investigators’ report numbered some four thousand.

The investigators had to look only at a few of the pictures before it became instantly clear to them what they had stumbled upon. The pictures showed ancient vases, statues, floor mosaics, and frescoes to which clumps of earth adhered. They were obviously dug up and photographed by so-called tombaroli, robbers who plunder archaeological sites. Room 23 in the distinguished Genevan depot, according to the accusations of the police, was nothing other than a salesroom in which Giacomo Medici sold his customers art objects from Italy, Greece, and other countries. The objects came from illegal excavations and did not have the export permissions legally required by the respective antiquities authorities.

The photographs in the Geneva warehouse had served as a kind of catalogue for this dealer in stolen goods, who has since been convicted. Documents accompanying the photos showed who his clients were, and evidence of the illegal sales came in the form of bills of lading, expert opinions, invoices, and checks. The investigators uncovered the names of collectors who had long been suspected of buying stolen goods. But until this discovery, the investigators had lacked proof of their suspicions. And some of the documents were electrifying: tying the scheme to one of the most respected art museums in the world, the J. Paul Getty Museum in Malibu. It was the first time that an important public art institution was implicated in the systematic, illegal plunder of cultural assets.

The Getty Museum, which has since moved into a gigantic art castle designed by starchitect Richard Meier that sits atop a hill in Los Angeles, is considered the richest art institution in the world. The oil billionaire Jean Paul Getty created a foundation upon his death in 1976, with an endowment of $700 million. In order to maintain its nonprofit tax-exempt status, the foundation is required to spend several million every year to support the museum. For decades, the Getty has been able to buy what other institutions can no longer afford: paintings by Pontormo and Van Gogh, valuable photographs and books—and also artworks of classical antiquity.

The direction of the department of classical antiquity had, since April 1986, rested on the shoulders of the curator Marion True. When she arrived at the Getty at the age of 36, the museum was in the process of significantly expanding its collection of antiquities in order to keep pace with the competition, such as the Metropolitan Museum of Art in New York. As she sat in court in Rome, accused of receiving stolen goods, smuggling national cultural assets, and indirect support of the theft of archaeological finds, it was established that she was comfortable with many methods of acquisition.

Italian prosecutors were able to prove quickly that a systematic network for trading in stolen property had operated at all levels.

According to the complaint against her, she absolutely knew that many of the new purchases that she made were from illegal excavations and thus did not have the requisite export licenses—a requirement under both US and Italian criminal law. Both she and the administration of the museum had long denied that they were aware of the illegal source of the artifacts. But then hundreds of documents that were leaked to the Los Angeles Times unveiled a different set of facts. The documents, which a disgruntled employee had leaked to hurt his boss, were partly handwritten and could have come only from the museum itself; they proved unequivocally that the management of the museum must have known very early on that a substantial part of the antiquities collection was acquired from illegal sources.

Giacomo Medici told the administration of the museum in 1985, for example, that three objects that the Getty wanted to acquire had been removed illegally from excavation sites near Naples. Nonetheless, the museum proceeded undeterred to pursue the ultimately successful purchase for $10.2 million. In another letter, the art dealer Robert Emanuel Hecht Jr. told the curator Marion True that the police were searching for an ancient urn. Despite that, the Getty later acquired that very object. Hecht at first withdrew an ancient pelike vase, which Hecht had also tried to sell to the museum in the mid-1980s, writing to True: “Yesterday my friend broke off the negotiations because the Carabinieri were looking for the pelike with the arms of Achilles. Therefore, he won’t get it. Perhaps others will buy it. Sorry. All my best, Bob.” In July 1986, the Getty acquired the vase nonetheless for $42,000.

In 1993, the museum bought a gold burial wreath, although True herself had at first characterized the acquisition as “too dangerous.” Later, she even received an Interpol telex that described the wreath as being “of illegal origin.” In internal memos also leaked to the Los Angeles Times, the director of the museum at that time, John Walsh, and the chairman of the board of the Getty Trust, which controls the museum, Harold Williams, mused about the traffic in stolen cultural goods (purely hypothetically and prophylactically, they later asserted): “Are we prepared to purchase stolen property out of overriding principles?”

Harold Williams freely admitted in the context of the True prosecution: “For decades, it was common practice for respectable museums and collectors to acquire artifacts without documentation of their origin—in particular, when the possible countries of origin did nothing to secure their excavation sites or to improve their laws.” Many of the details that came to light in the Getty proceeding are anything but appetizing. But True gave up her position at the Getty only when it came out that she had bought a vacation home on the Greek island of Paros with a $400,000 loan from the London art dealer Christo Michailidis, who, together with his business partner Robin Symes, had sold the Getty artworks valued at more than $30 million during Marion True’s tenure there.

Italian prosecutors were able to prove quickly that a systematic network for trading in stolen property had operated at all levels, from the tombaroli to certain antiquities dealers and on to prominent institutions and museums. A piece of ruled paper with handwriting that had turned up in the search was decisive for the investigators in this regard. A copy was shown to the writer Peter Watson, who, together with the journalist Cecilia Todeschini, published a book about the case, The Medici Conspiracy. Watson describes the spectacular find in his book: “The whole thing showed nothing less than the organizational diagram of the secret antiquities smuggling networks throughout Italy, Switzerland, and other countries, naming every single person in the entire hierarchy, from the very top to the very bottom and everyone in between.

Moreover, it was annotated with the relationships of these people to each other, who supplied whom, who was in competition with whom, which middlemen supplied from which Italian regions, and what relationship they had to international dealers, museums, and collectors. It was breathtaking. The blue ballpoint pen writing was easy to read. In the upper right in capital letters, ‘Robert (Bob) Hecht’ with two horizontal arrows to ‘Paris and USA—museums and collectors.’” In the end, Hecht stood accused along with Marion True before the court in Rome.

Medici was sentenced in Rome in 2004 to ten years’ confinement and a monetary penalty of €10 million. True resigned from her position in September 2005. When, in 2007, she was ready to testify about the structures inside the Getty Museum, the civil case against her was dropped by the Italians. Many criminal charges against her had meanwhile aged past the statute of limitations. Her business partner Robin Symes, who is said to have thirty-three art and antiquities depots in his control, was convicted in 2005. Then, in 2014, in one of his warehouses in Geneva, investigators discovered forty-five crates of artifacts that had been stolen from excavations in Sicily, Apulia, and Calabria in the 1970s. They were returned to Italy.

Following the successful investigations, Italy demanded the return of 42 ancient artifacts from the Getty Museum alone. Meanwhile, attorneys working at the behest of the museum have carried out research, and they found that many more exhibition pieces in the museum’s collections are involved. At least 82 objects on display can be traced back to art dealers whom authorities accuse of illegal practices but from whom the Getty regularly made purchases anyway. Of the 1.4 ancient art objects that the museum itself labels as “masterpieces,” 54 have questionable provenance. The list of individual cases of questionable practices at the museum has grown long and thus reveals systemic misconduct. As a young curator gave up his post in 1986 he summarized the developments at the Getty that had been going on for years. In a letter he said that the museum was guilty of deliberate blindness regarding the circumstances in the antiquities department. Almost prophetically, the art historian wrote that “curatorial greed” would lead to an external investigation and that a foreign government would demand the return of stolen cultural assets. Twenty years later, that’s exactly what happened. 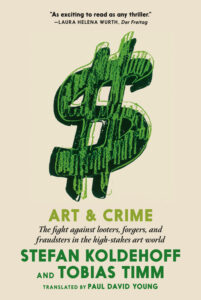 From Art & Crime by Stefan Koldehoff and Tobias Timm, translated by Paul David Young and available via Seven Stories Press. 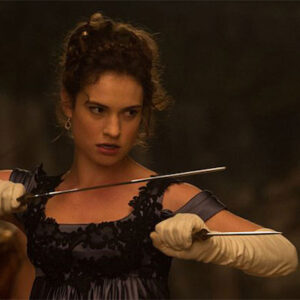 I will never forgot when I first saw that iconic moment of American cinema: the Bennet sisters, et al., in a ballroom, pulling...
© LitHub
Back to top
Loading Comments...