Fifty years ago, a five-year-old Oregon girl sang and skipped through her living room, urging her mother onward—though, she protested defiantly, she was not pestering. She was simply unable to contain her excitement to get started with the morning. It was the first day of kindergarten, and “she was a girl who could not wait.”

This was Ramona Quimby. Or rather, this was our introduction to her story: 1968 marked the publication of Ramona the Pest, Beverly Cleary’s winsome first book from the perspective of her new heroine. We had met her in a few previous stories featuring older kids, pestering Henry Huggins and her sister Beezus since Cleary’s first book in 1950. But with the publication of Ramona the Pest, we finally saw the world through her eyes.

I vividly remember reading the Ramona books as a child with my mother in the 1980s, and over the past few years I’ve been reading them again, some of them several times through, to my own daughters.

Ramona has endured as only a handful of other storybook characters have—the Grinch, Winnie-the-Pooh, Peter Pan. She’s a girl among boys. Oh, there are a few other female figures in the canon of early childhood—Pippi Longstocking, Charlotte the spider—but Ramona is a plain girl in the suburbs. Nothing remarkable happens to her, no one notices her particularly, nor does she have the power to make her own magic.

Ramona is ordinary, headed to her ordinary public elementary school with a new dress and mussed hair. Her boots get stuck in the mud, she misunderstands the words to the “Star Spangled Banner” and hums happily to herself about the “dawnzer lee light,” and she tries as hard as she can to resist pulling her classmate’s springy curls. (She doesn’t succeed.) These are the great dramas of her life.

Ramona has kept me and my kids company through their own first elementary school years, which have coincided with a time that feels particularly brutal toward children: daily news of government policies separating asylum-seeking families, and then losing many of those children in the “system.” Sandy Hook still echoes in my psyche when I drop my kids off at school, as we now have to acknowledge that relevant emergency preparedness for five-year-olds includes active shooter drills. How can we explain any of this to our children?

Ramona reminds us that many of our adult-constructed rules don’t make much sense. Why would her teacher, who has told the class she cares for them and reinforced the importance of the kindergarten classroom practices, stay home sick and leave them with a stranger as a substitute—an older, sensible woman who does not know the traditions of their kindergarten? Why would her mother scold her for sticking out her tongue at the neighbor, when the neighbor had clearly asked if the cat had gotten it? Ramona puzzles through the conventions of the world around her, a world in which she is expected to know how to behave, even though it makes few accommodations for joyful, expressive little girls.

How can we explain any of this to our children?

One way to look at Beverly Cleary’s world—Klickitat Street and its surrounding neighborhoods, populated by Henry Huggins, Ellen Tebbits, Otis Spofford, Beezus, Ramona, and more—is as a nostalgic retreat. These children exist in a kind of free-range utopia. It is a simpler time, when kids roamed their blocks without parental supervision or worry, when they invented games instead of interacting with screens, where they held paper routes and could scrounge money to buy a bike at auction for $6. There’s certainly an appeal to that vision, even for those of us who never experienced it.

And there are obvious limitations to this utopia as well: an entirely monochromatic cast of characters and moments of silly, antiquated sexism (“What a clever boy!” Mrs. Quimby says to the neighbor, Howie, after he “fixes” Ramona’s trike by taking off a wheel. “You must be very good with tools”).

But, for me, the Ramona stories are still entirely relevant to our messier, complex world. More than anything, Ramona stands for empathy in the face of misunderstanding. She reminds us how it was to be a child in a big world, needing to be seen, cared for, and reminded that we belong. And she loves fiercely: Ramona is overcome with yearning to touch another child’s hair to see it “boing,” desire to squeeze all the toothpaste out of the new tube for the pleasurable gush of it, and fierce determination not to be dismissed as a baby. She is hungry for the world, though its rules are difficult for her, and its conventions perplexing. She laments that she has forever lost the love of her kindergarten teacher when she replies honestly that no, she does not think she can stop pulling Susan’s curls.

I read these passages and feel bolstered to be a better parent, loving my kids’ wide-eyed wonder. And I need that bolstering: my own kindergartner has been in an artistic fugue lately. With a crayon, pencil, oil pastel, or, god forbid, a permanent marker constantly in hand, she finds her canvas everywhere.

This morning we found a long blue line down the stucco front wall of our house. Notes with letters and arrows are stuck to the molding in the dining room, living room, and kitchen, marking the trail for some mysterious treasure hunt. She’s gone through a full ream of printer paper in a month, drawing spider webs, jugs of lemonade, and dog families. All of her limbs (and some of the furniture) are covered with swirls, flowers, and numbers. Sometimes it feels like we live inside a bizarre art installation, and my adult desire for order clashes with her ebullient need to create. Ramona reminds me that my way doesn’t necessarily make more sense, that what I’d term “wrecked” might be my daughter’s “decorated.”

Cleary’s Ramona stories are unlike so many of the other novels for early grade schoolers that have emerged in her wake. I cringe at the books about cliques and popularity that my daughters have brought home, full of royalty, magic powers, and two-dimensional villains: the bully at school, the bossy older sister, the strict and oblivious parent, the authoritarian teacher.

Beverly Cleary’s vision, so perfectly articulated through Ramona Quimby’s eyes, feels like a balm for our moment.

Ramona’s parents and sister may not see things her way, but Cleary’s generosity of spirit shows them to us, even in the background, as real people. They each have their own desires and blind spots, but they want to help—they strive for family harmony. When Ramona’s mother realizes she has a whole free day in which errands don’t need to be run nor tasks completed for others, I feel her joy at marveling that today she will take on one of her own projects, sewing. Ramona is peeved that she is not the center of her mother’s attention, but she also sees her mother in this moment as an independent person.

Cleary reminds kids (and adult readers) that parents are people too, who make mistakes and deserve our empathy. In a later book, Ramona’s father takes out his unemployment frustrations on his family, snapping at his daughter who is ardently campaigning to get him to stop smoking. He wants to do what he wants to do, even though he knows it’s bad for his lungs. He wants a break—not to have to be a role model all the time.

Beverly Cleary’s vision, so perfectly articulated through Ramona Quimby’s eyes, feels like a balm for our moment. Every character tries to do right according to their own means of expression and ability. They mess up, they fight, and they try again.

Parenting has never been easy, but it seems particularly freighted with anxiety in this era of political dysfunction and environmental collapse. Everything about children attunes us to the future—the gaps in their smiles from newly lost teeth, their relentless playground energy, the piles of too-small clothes to be culled from the dresser every season. I spend inordinate amounts of time worrying about what world we are bestowing on these bright new people, and enumerating the ways in which I have already failed them.

But then I remember that Beverly Cleary still walks among us. Her hundredth birthday came and went; April 12, 2019 is her 103rd. She walked the very streets I walk, in fact, in Berkeley, California, for many years. If you have kids, you’ve probably read her. If you were a kid, you’ve probably read her. She worked on these books for half a century, completing the Ramona series in 1999.

That scrappy troop of resourceful, ordinary kids changed me, and the little one, Ramona, shines the biggest light. She’s irrepressible, zooming her lopsided two-wheeled trike in circles around the driveway. She’s going to make it, and she knows it. I’m grateful for her reminder that earnest effort, in childhood and always, is what makes a heroine. It makes a great story too.

Rachel Richardson is the author of two books of poems (Copperhead and Hundred-Year Wave, both from Carnegie Mellon University Press) and several essays in magazines. Her work has recently appeared in the New York Times Magazine, Slate, Lit Hub, San Francisco Chronicle, and elsewhere. She has been running for eighteen years, and is currently training for her eighth marathon. 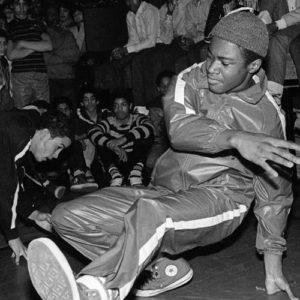 About 20 years later than you would’ve expected, hip hop literature (and literature about hip hop) is finally developing...
© LitHub
Back to top