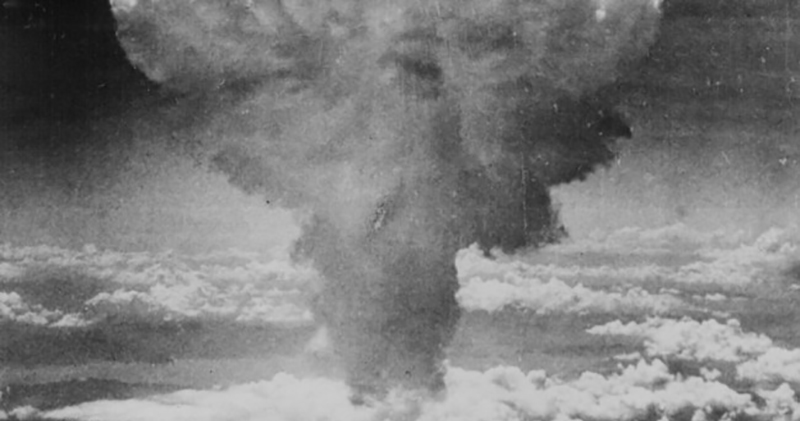 In 1945 Peter Higgs was in the science sixth form, at age sixteen. Politically, he was still very much following his parents’ example. As the 1945 UK general election happened, the school staged a mock election and Higgs took the side of the Conservatives, which was the family tradition.

Once the Clement Attlee government was elected and he saw how it was transforming the country, he was very rapidly converted. “The NHS [National Health Service] was part of it but the whole program was quite inspiring. It was clear that it would transform the country in a way I was sympathetic to”, he explained. He went on to support socialist ideals for the rest of his life.

Higgs’ teenage search for self-identity was settling around a love for physics when suddenly news broke that atomic bombs had been dropped over Hiroshima and Nagasaki. He was distraught. His father’s experiences in World War I had already imprinted a hatred of warfare, and now tens of thousands of Japanese civilians had been extinguished by the result of the physics which drew him. For a time, he even “contemplated a change of career”.

Bristol University physics professor Neville Mott spoke about the bomb at a Bristol Rotary lunch on 20 August, in a talk titled “The Bomb Which Might End Wars—or Civilisation”. He told the audience, “The centre of the atomic bomb explosion is very like the core of the sun—hotter if anything”. Mott warned that “the bomb dropped on Hiroshima was a Mark 1. In 10 years, these things will be bigger and better. We must improve the Charter of the United Nations to the point where there is only one armed-force in the world.”

Mott’s remarks to this small gathering were reported in the press and piqued public interest. He and his physics colleague, Professor Cecil Powell, decided it was their duty to stage a public lecture and inform Bristolians of the background to the bombs, insofar as it was possible for them to do so. The US War Department had issued 250 pages of information about the weapon’s development in the Smyth Report on 12 August, just three days after the bombing of Nagasaki, but many technical details of the project remained highly secret. The university was near to Cotham School but a long way from his home, so after school was ended for the afternoon, Higgs remained and then walked over to the university to listen.

The event took place in early October. Powell gave an account of the basic nuclear physics involved, followed by Mott’s assessment of the political and practical implications. Higgs recalled that the hall in the university was full, “the audience packed tightly on the benches”.

In atomic nuclei, the neutrons and protons adjust themselves to make the most stable configuration. This is an example of nature’s golden rule: the most stable structure is the one that will survive the longest. Just as a pile of stones stabilizes by collapsing to rubble, for an atomic nucleus to achieve stability the effects of the electrical forces disrupting the cluster of protons must be minimized. Atomic nuclei adjust naturally from configurations of higher to lower energy, emitting the excess energy in what we call radioactivity, until stability is reached. Radioactivity typically emits a million times more energy, atom for atom, than that liberated in a chemical reaction, and it was chemical reactions that formed all processes known from primitive times until the early twentieth century.

Powell told the audience what physicists had known since around the start of the war before secrecy took over atomic science. The breakthrough that led to the atomic bomb was the discovery in 1938 of nuclear fission, which releases nuclear energy on a scale previously unimagined. The key is a rare form of uranium known as U-235.

Nuclei of these atypical uranium atoms are so fragile that a mere touch by a slow neutron can be enough to split the pack. When the nucleus of a uranium atom splits this way, the total energy released is over one hundred times greater even than in radioactivity. Comparison to chemical reactions is stark: fission frees nearly a billion times the energy. This, the audience learned, was the first step towards the newly arrived atomic age.

The discovery that opened the route to the atomic bomb had come early in 1939 when scientists found that the fission of a uranium nucleus also liberates neutrons. If these secondary neutrons hit other atoms within the lump of uranium and cause them to divide with the release of both energy and further neutrons, a self-sustaining nuclear chain reaction is possible. This causes an immense release of energy and in extremis a nuclear explosion.

The effect on the young Higgs was a lifelong abhorrence of nuclear weapons.

Higgs now heard Powell explain that this was the basic idea behind the bomb that had been dropped over Hiroshima. The horror didn’t end there as Powell then announced that the newly released information revealed there was another way of making an atomic explosion, which was used at Nagasaki. Scientists had discovered that when neutrons hit uranium, it is possible to make an entirely new element, one not found naturally on Earth and existing beyond uranium in the periodic table: plutonium.

Mott’s vision of the implications was depressing. No one yet knew for sure, because much was still highly secret, but he suspected—correctly—that nations would build arsenals of these new atomic weapons. He conjectured that a United Kingdom of big cities would be vulnerable to attack by atomic bombs, and he portrayed a dystopian society readjusting to a form of existence more familiar in the days of Henry V, when the population was scattered among many small towns.

He also warned that if an atomic bomb exploded on the ground instead of in the air, the place where it fell “might remain radioactive for weeks or even years.” Humans visiting the site would sustain internal burns which would develop later. “You would go and do rescue work on an atom-bomb site at your peril”, he warned the audience. He added more optimistically that there was vast potential for atomic energy to be used for peaceful means such as power, though he tempered this vision with an observation about the vast cost: “At the moment it is not an economical alternative to coal petrol and other existing fuels.”

The effect on the young Higgs was a lifelong abhorrence of nuclear weapons.

The experience convinced Powell that there was an audience for popular science lectures, so the following year, 1946, he gave a series of talks about his own research. These lectures, in which he described photographic emulsions and demonstrated their ability to reveal the passage of particles smaller than atoms, were Higgs’ first exposure to the experimental side of a new field of science: particle physics.

Whereas the first public lecture in Bristol had presented Higgs with a hellish picture of nuclear physics, this time he learned there was a more optimistic vision of what it could offer in understanding the workings of nature. Powell’s talk also implicitly pointed at a profound puzzle: the fact that atomic nuclei exist at all. The audience were familiar with the force of gravity, which controlled the motion of the planets, and the effects of electrical discharges and magnets, which were manifestations of the electromagnetic force.

But if gravity and electromagnetic forces were everything, then atomic nuclei could not exist. The electrical disruption among electrically charged protons is huge and their mutual gravitational attraction trifling by comparison. That atomic nuclei manage to survive implies the existence of a strong attractive force between protons and neutrons, at least when they are in close proximity. One of the questions puzzling Powell and other scientists was the nature of this strong force. One means of finding out could be to see how easily nuclei could be disrupted by violent impacts, and what happens when they are.

Although atoms are very small—typically 100,000 of them could span the width of a single human hair—they are nonetheless vast compared to the atomic nucleus. In relative size, the nucleus is like a fly in the atomic cathedral. The atomic nucleus may appear inaccessible, but Powell began with the exciting announcement that nature has gifted us a way of smashing it apart. He told his audience about cosmic rays.

Thousands of meters above the Earth’s surface, the outer atmosphere experiences a continuous bombardment of atomic particles, known as cosmic radiation. The particles—which are mainly the nuclei of atoms—have been whisked to very high energy by magnetic fields deep in space. The Earth’s own magnetic field reaches out for tens of thousands of miles and attracts some of these extraterrestrials. They smash into atoms in the upper atmosphere and break them up, their energy spawning showers of novel particles.

At ground level, the overlying atmosphere protects us from the full force of cosmic rays, so to study their full power Powell planned to send photographic emulsions to high altitude in balloons. Collisions between cosmic rays and nuclei of atoms in the emulsion would disrupt these nuclei, and the results would energize the emulsion, enabling their trails to be revealed once the images were returned to Earth and developed. He had great hopes for this new venture, not least as cosmic rays had already revealed hints of unusual varieties of stuff hitherto unknown on Earth.

Powell speculated that cosmic rays would reveal many surprises. Even as he spoke, this prediction was being fulfilled with the imminent discovery in cosmic rays of strange particles. Within a few years, earthly analogues of the collisions of cosmic rays in the form of experiments at particle accelerators would become feasible. As Higgs prepared to move on to university, in 1947, a new field of research—high-energy particle physics—was about to flower. 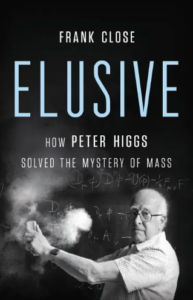 Excerpted from Elusive: How Peter Higgs Solved the Mystery of Mass by Frank Close. Copyright © 2022. Available from Basic Books, an imprint of Hachette Book Group, Inc.

Frank Close, OBE, FRS is a particle physicist and an emeritus professor of physics at the University of Oxford. He is the author of over a dozen books, including Infinity Puzzle and Half-Life. He lives in Oxford, England. 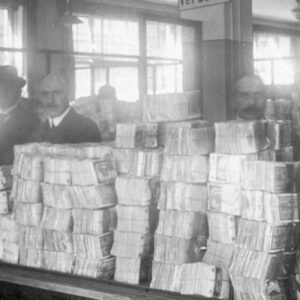