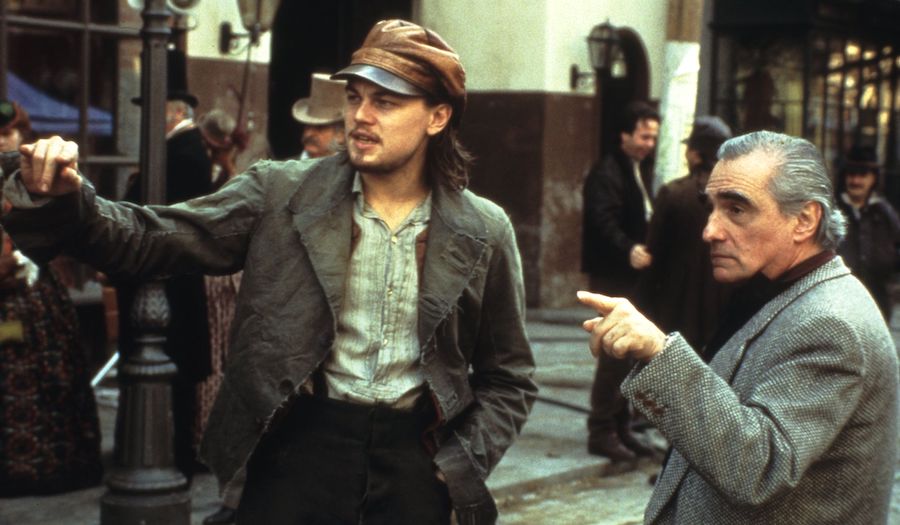 From Mean Streets to Hugo (?) and Back Again

Martin Scorsese is one of the few New Hollywood directors who have consistently made auteur commercial feature films up to the present. Many critics claim he is the most accomplished artistically of these directors, who include the equally successful but more mainstream Steven Spielberg. After New Hollywood’s fall in the late 1970s, Scorsese remained connected to the world of independent film as well as the Hollywood film industry. Since his earliest days as a director, he has negotiated between artistic autonomy and commercial demand. As Scorsese reminded Bernard Weintraub in 1995, his calling as a filmmaker included a dedication to making personal, honest, and creative films. This is what has made Scorsese an icon of American independent film up to the present. This status has been buttressed by an extensive public story that since its beginnings in the late 1960s has remained remarkably consistent in its overarching themes and tropes.

Scorsese’s public story is about a filmmaker who has made personally relevant and artistically powerful movies but also has sought the big budgets and mass audiences only Hollywood could provide. His public story is the embodiment of la politique des auteurs that informed the independent film community. This theory in the 1950s and 1960s celebrated film directors who incorporated personal vision within commercial feature film, whether the classic films of Jean Renoir and Howard Hawks or the postwar art cinema of Akira Kurosawa and Jean-Luc Godard. This theory informed the New Hollywood renaissance. Scorsese is an archetype of the auteur filmmaker—a position of commercial independent film set between avant-garde experimental film and mainstream Hollywood film. That Timothy Rhys would provide in 2002 such a vivid description of the autonomy of Scorsese in MovieMaker, an independent film magazine, is testament to the enduring iconic status of this director in American independent film.

The politique des auteurs narrative includes tropes of personal vision, artistry, technique, risk taking, rule breaking, independence, and being-the-outsider, but also tropes of being pragmatic, a player, a negotiator, and a filmmaker who wants to make films demanding large Hollywood budgets. Village Voice film critic Amy Taubin in 1990 pointed to Scorsese’s outsider-insider status: “Scorsese is an anomaly among contemporary film directors. For 20 years, he has managed to make utterly personal, deeply autobiographical movies that are bankrolled by the film industry. He’s both an art-film director—the American equivalent of a Buñuel or Truffaut—and a ‘player’ in Hollywood.” In his 1996 documentary on American cinema, Scorsese again commented on his outsider-insider status: “Even today I still wonder what it takes to be a professional or even an artist in Hollywood. How do you survive the constant tug of war between personal expression and commercial imperatives?”

Scorsese’s public story has also emphasized his encyclopedic knowledge of classic American and European films. Scorsese in interviews constantly refers to the classic films that inform his specific works. Those who have worked with him also point to the large number of classic films he previews with his collaborators before each production. As Scorsese said in receiving the American Film Institute Life Achievement Award in 1997, “This award is meant to honor the masters of the golden age of the studio system. … They’re the pioneers who created the grammar of film language. What we do now, they did before.” Scorsese’s documentaries on American and Italian film, A Personal Journey with Martin Scorsese through American Movies (1996) and My Voyage to Italy (1999), attest to his commitment to classic American and European film. As the British Film Institute’s Sight and Sound proclaimed, “Scorsese is famously a hands-on historian of cinema, with his own vast print collection and encyclopedic knowledge.” An auteur like Scorsese does not reject the tradition of commercial narrative cinema but embraces it as essential to his personal vision. He works with this tradition as a “genius within the system.”

Martin Scorsese’s public story began when the New York Times in 1969 introduced to the world a young director from New York City’s Little Italy. By the release of his acclaimed Mean Streets (1973), the details of his youth in Little Italy were being added to his public story. Over time more details would be added about how his life experiences as a youth formed his passion for film as well as the themes in his films. In this story, Scorsese was born to be a filmmaker with memories as far back as a four-year-old kid mesmerized by watching the Hollywood classic Duel in the Sun. Making films was his driving passion and his ultimate salvation. As Hal Hinson commented in the Washington Post in 1991, “People make movies for a lot of reasons, but Scorsese makes them because he’s hooked. His blood runs pure celluloid.”

Scorsese’s public story is presented as a product of a history of human experience as lived in the social and cultural context of his life in Little Italy and as imagined in the world of film. What has been personal in Scorsese’s art is not simply an aesthetic vision but an affective connection between his lived experience, his passion for film, and the stories in his movies. As Scorsese in 1986 told Peter Biskind and Susan Linfield in American Film, “It always comes down to whether I see myself in the film.” His films are portrayed as honest not only in how critics see them as starkly realistic. They are real in how Scorsese speaks to their “anthropological” sense—placing characters in historical settings to reveal the connection between individuals and the social. And he constantly speaks to personal connections to his film characters from Charlie in Means Streets (1973) to Jake in Raging Bull (1980) to Howard Hughes in The Aviator (2002). As Scorsese told Rolling Stone’s Anthony DeCurtis in 1990, “So the only criterion on the films I’m willing to take risks on is that it be truthful, that it be honest about your own feelings and truthful to what you know to be the reality around you or the reality of the human condition of the characters.”

Film was his only salvation from the two stereotypical paths available to a young Italian male in Little Italy in the 1960s: the priesthood or the mafia.

In Martin Scorsese’s public story, film was his only salvation from the two stereotypical paths available to a young Italian male in Little Italy in the 1960s: the priesthood or the mafia. This was a theme perpetuated by Scorsese himself, as film becomes the rare path out of Little Italy. “Coming from this little Sicilian village on Elizabeth Street, you might as well have said to me, ‘You’ll be living on the moon,’ as saying, ‘You’ll make movies.’” Scorsese also points to how there were no books in his home, how he was a terrible student who only made it to college because NYU would take anyone. “And, I’ve said it many times in interviews. I come from a home where the only things that were read were the Daily News and the Daily Mirror. … I mean, I’m not a fast reader, although I’m forcing myself to read as much as possible now. I’m sort of catching up on books that I should have read twenty years ago, forcing myself to read a lot.”

His public story does not portray him as innately artistic, or innately intellectual. As Timothy Rhys points out in 2002, “To hear him tell it, one thing Martin Scorsese doesn’t need is to be called an ‘artist.’ God forbid. No red-blooded American director ever claimed to be an artist anyway. ‘Auteur?’ Give him a break. ‘Auteurs’ don’t come from Elizabeth Street.” Scorsese had an affective connection to a single, personally resonant art form—a popular affective appreciation more than an avant-garde aesthetic appreciation.

Scorsese’s affective appreciation of the popular reveals itself in his filmmaking. Scorsese is celebrated for his respect and mastery of conventional film language and technique. It is the realism, honesty, and personal engagement not supposedly found in mainstream Hollywood film that are the foundations of Scorsese’s independence. Although Scorsese has integrated nonconventional techniques found in early New Wave cinema and avant-garde cinema into his unique vision as an auteur, it is not a rejection of the tradition of commercial filmmaking or an emphasis on formal experimentation over story that defines him as a filmmaker. The popular aesthetic rejects art for art’s sake—art focused on formal experiment—for the art of the real. As Scorsese says, “I come out of the narrative tradition. Those are the films that I first saw and those are the films that made the most, the biggest impression on me. I was raised on American films, which means story and narrative.”

The public story of Scorsese also has presented him as an outsider. As he told Fast Company in 2011 in talking about the end of the New Hollywood renaissance, “They saw me as outside Hollywood. You’re gone; you’re in independent cinema now, on the outside from now on.” But Scorsese is also portrayed as outside mainstream America. Since his beginnings as a film director, both Scorsese and others have emphasized his roots in the working-class ethnic enclave of Little Italy as setting him apart from mainstream America. Scorsese’s uniqueness as an artist is more often associated with his life experience in Little Italy than with some abstract muse or intellectual agenda. Scorsese in this public story even positions himself as an outsider to Art. “To me, Bohemians are people in black-and-white movies, wearing black turtle-necks, reciting poetry I don’t understand, talking in coffee houses that have a lot of brick I wasn’t that hip that way.”

But what is even more compelling is how a commercially successful and highly celebrated American filmmaker has been portrayed throughout his career as an artistic and social outsider. It speaks volumes about 20th-century American art and society in how Scorsese’s public story paints him as much an outsider, rebel, and autonomous artist as any avant-garde filmmaker in America. 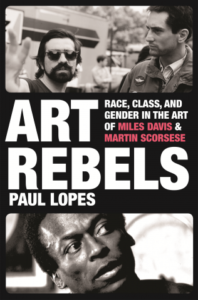 Excerpted from Art Rebels: Race, Class, and Gender in the Art of
Miles Davis and Martin Scorsese by Paul Lopes. Copyright © 2019 by Princeton University Press. Reprinted by permission.

Paul Lopes is associate professor of sociology at Colgate University. He is the author of Demanding Respect: The Evolution of the American Comic Book and The Rise of a Jazz Art World. 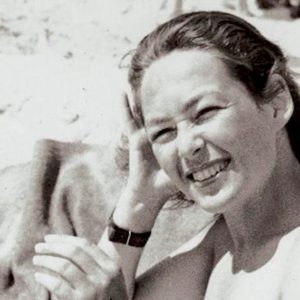 Patient goes to doctor. “Doctor,” he says, “you have to help me, I am in desperate need. I’m pissing everywhere.”...
© LitHub
Back to top
Loading Comments...