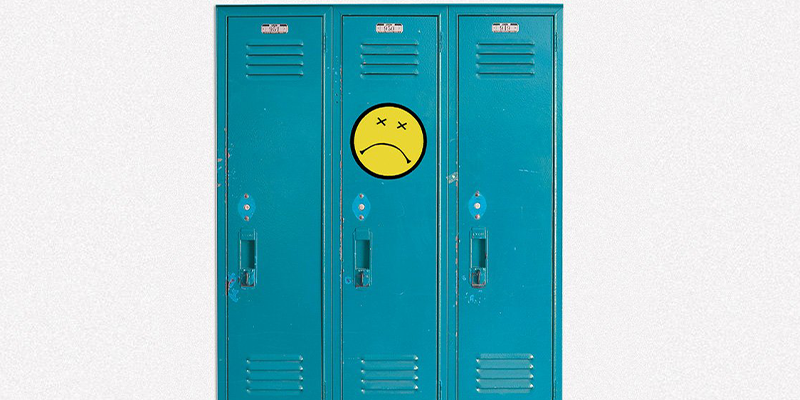 How many of these f*cked up Y2K era YA novels do you remember?

Earlier this week, I was having a perfectly normal dinner with some friends who were in town, and I can’t remember how we got on this topic, but we ended up spending a good 30 minutes trying to track down the name of a middle grade/young adult book from our youth. One friend in particular was unable to let it go, and 12 hours later, she found it: The Downsiders by Neal Shusterman.

It tells the story of a community underground (many of our search results kept coming back The City of Ember, which was more mind-blowing than fucked up, in my opinion) called the Downsiders. They live underneath New York City, repurposing the trash of the Topsiders (people who live above ground). The two worlds are not supposed to interact, but of course, a 14-year-old boy’s curiosity gets the best of him and mayhem ensues. His community sentences him (a literal child) to death for his betrayal, there’s a “Chamber of Soft Walls” (an underground mental health facility), parts of the city explode, and in the end, it’s actually about trying to escape the corrupt mayor of New York City. (The book was published in 1999, but that last part is evergreen.)

Of course, finding this book description really just sent me down a whole other rabbit hole. I feel like I still think a lot about the children’s books that made me (Where the Wild Things Are, Harold and the Purple Crayon, Strega Nona, etc.) but what about the books that came after that?

I would argue that the late 1990s and early 2000s were rife with dark and questionable books that I, quite frankly, can’t believe we were allowed to read. Seriously, where were the adults? (If you think of any others—which I’m sure you will—feel free to drop them in the comments so we can reminisce with horror together.) 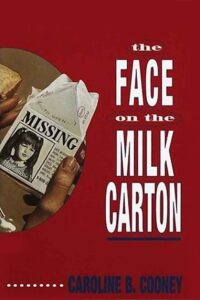 Caroline B. Cooney, The Face on the Milk Carton

The Face on the Milk Carton starts at lunch, when Janie Johnson glances at a missing child ad on the side of a milk carton—and recognizes the face as her own. She’s obviously incredibly disturbed by this: does this mean that her loving parents are malicious kidnappers? After discovering legal documents with different aliases in the attic, she confronts them, and they tell her that she is actually their granddaughter. Their daughter (her mother) was a troubled teen who ran away, joined a Hare Krishna-esque cult, and got married. Inexplicably, one day, she shows up with baby Janie, but ultimately the call to return to the cult is too strong. Fearing that one day, they might demand the baby back, Janie’s grandparents move away and change their last name. But wait, there’s more! It turns out that Janie wasn’t actually their daughter’s daughter: she had, in fact, been kidnapped by their daughter… Did every kid demand a DNA test after this, or was that just me? 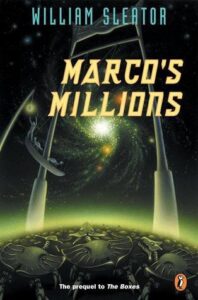 Marco’s Millions is the prequel to William Sleator’s The Boxes, but if we know anything about origin stories, it’s that they’re usually even darker than the source material. In this one, Marco and Lilly are siblings who can somehow communicate telepathically. One day, they notice some strange lights coming from their basement, and Marco goes to investigate. (Nothing good can ever come from going to the basement!) He encounters a secret passage to a different world, one with super creepy ant-like creatures that know all about him and his sister. They tell him that he’s the chosen one, and that he must help them save both worlds by going on a quest. But there’s a major catch: time moves differently in this world. By the time Marco resurfaces, it’s been decades… and he learns that basically his entire family has died in a car crash while he was gone. Now that’s how you end a book—and scar an entire generation of young readers. 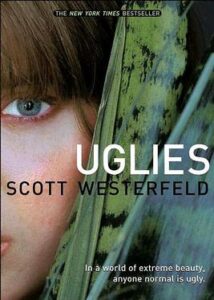 In case the print is too fine to read, the tagline on the cover there is: “In a world of extreme beauty, anyone normal is ugly.” Yes, this is a dystopia that takes an obsession with beauty to a wild extreme. At the ripe age of 16, everyone in this society undergoes a total reconstructive surgery that makes them pretty. It’s a rite of passage. Our main character can’t wait for her transformation—until she learns what’s really going on: along with the beautification process, the doctors surgically remove the parts of your brain that allow for critical thinking, so that everyone is obedient and easy to control. Let the record show that this book is officially filed under: dystopian – eating disorders & body image. 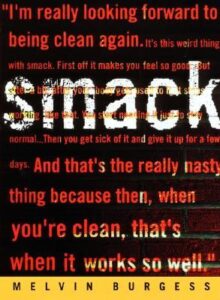 Winner of the 1996 Carnegie Medal in Literature (for children), Smack is sort of like a YA romance novel… with heroin. Two teenagers are falling in love and experimenting with hard drugs at the same time. 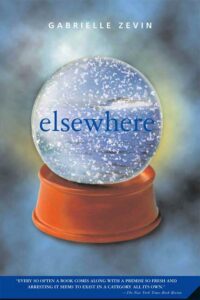 Elsewhere begins with 15-year-old Liz’s death. Welcome to the afterlife: it’s beachy and serene, arguably a very nice place to hang out while you age backwards. Here’s how it works: once you become a baby again, you get reborn on Earth. You may watch your loved ones from the Observation Deck, but you may not make contact with them. Obviously, the bulk of the novel is about Liz coming to terms with her own death and figuring out how to enjoy a life lived backwards in this other realm, but somewhere along the way, Liz meets a nice guy named Owen, who (in his other life) was married and in his 30s. Eventually, his wife shows up in Elsewhere, and they briefly continue their relationship—before she breaks things off since he is now considerably younger. Eek! 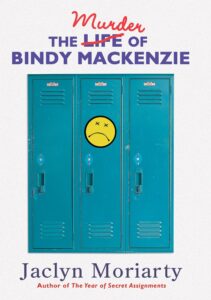 In which an obnoxious know-it-all high school student (think: Paris Geller) decides to meticulously document her life to prove that she is the smartest and nicest of them all. But when you write it all down, you’re bound to make a few enemies. Something strange starts happening to Bindy. She’s falling asleep in class. She can’t seem to think straight. Her mind begins to unravel. The root cause? One of her teachers has been slowly poisoning her with arsenic(!!), because she’s actually a criminal and she’s afraid Bindy unwittingly overheard something she shouldn’t have. Don’t take muffins or nail polish from your teachers, kids! 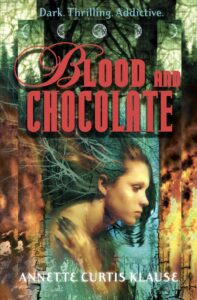 This book is arguably responsible for the werewolf romance craze. Meet Vivian, a 16-year-old and the new kid in town. Why did her family move? Well, a member of her wolf pack lost control and murdered a human girl. He went to prison, but their friends decided to kill another human to make it seem like a serial killer was still on the loose, thus freeing their friend. Once Vivian’s father (the pack leader) uncovers this plot, he murders the first killer. But the townspeople get suspicious and burn their house down, killing Vivian’s dad in the process. That’s just the beginning. Her mother and her mother’s friends are inappropriately fixated on a young 20-something-year-old in their pack, destined to be the next pack leader. Too bad he’s only got eyes for Vivian. And in their new town, she keeps waking up surrounded by blood and, once, a human hand? She figures out that she’s being framed for murder by the jealous mothers? And in the end, she winds up with the guy her mom had the hots for, so… that’s scandalous! 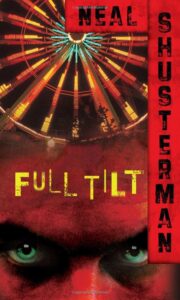 Ah, yes, a psychological thriller for children! The cover alone will haunt your dreams for years. In this one, a group of friends are hanging out at an amusement park when they meet a kind stranger who tells them of another special, invite-only, late-night amusement park. Sounds fun! Unfortunately, once the gates close behind them, they learn that they must survive seven rides before dawn in order to be released. If they fail, they’ll be trapped there forever. It seems easy enough, but the catch is that each ride is designed to force you to confront all your worst fears. During the final ride, the main character is forced to sit with a memory he repressed: a school bus accident in which he was the sole survivor. He gets through the ride, and the friends escape the amusement park—only to realize that they themselves have actually been in a horrific car accident on the way to the first amusement park. Was it all a dream? Neal Shusterman, are you okay? Are any of us?!