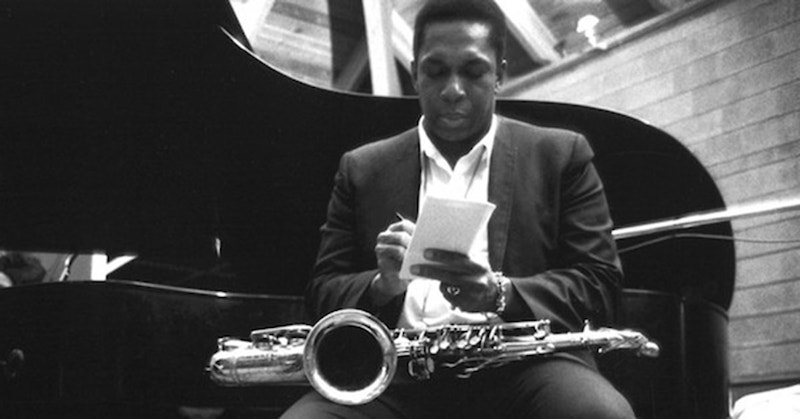 One of the most important artists in the 1960s, Coltrane pas­sionately expressed his African American Islamic spirituality both in his album A Love Supreme (Impulse!, 1965) and in his exploration of self-purification, new musical forms, and the Black Arts movement in New York. Coltrane expanded the geographic and religious frame of black internationalism, experimented with new sounds and spiritual tradi­tions from the Third World, played with Muslim artists in his band, and developed a serious interest in Sufi mysticism.

He incorporated Islamic themes and Middle Eastern and Indian modal forms into his music, used African polyrhythms and themes in his improvisation, and included what Yusef Lateef called “Islamic poetry” in his iconic album A Love Supreme. In this way, he brought together in jazz the liberation values and struggles of African Americans, Asians, and Africans in a “just universal order” whose cultural and racial diversity paralleled that of the global Muslim community—the ummah—itself.

The saxophonist pursued an improvisational Afro-Asian, African, and Islamic path to A Love Supreme during a period when Black Power activists like Malcolm X and Amiri Baraka demanded a reconstruction of black religious and musical identi­ties drawing on Third World sources, to achieve their revolutionary po­litical goals. Black Power activists admired Coltrane as one of their heavy spirits. By the 1960s, he came to believe that performance of jazz was “personal spiritual expres­sion, and [that] the artist should be fully committed to… erasing aes­thetic boundaries and proscriptions about style” to explore spirituality in music. The religious and artistic quest that led to the Islamic spiritual themes in his album was inspired by the musicians from the early 1960s who explored new forms of spiritual creativity and sources of sound and expression from India, West Africa, and the Middle East.

John Coltrane’s provocative musical and religious universalism intersected with his black Atlantic cool style, his sense of independence and liberation, and his transnational vision during an African American cultural revolution, and culminated with his interest in attending Malcolm X’s speeches in New York City, his musical and religious projects with Yusef Lateef and Babatunde Olatunji, and his African travel plans at the end of his life.

Trane’s revolutionary artistic and religious values helped to create al­ternative transnational notions of black masculinity in jazz. The trans­national musical and religious impressions from Asia, Africa, and the Middle East that animated his new soundscape intersected with the global span of African American Islamic geography expressed in the construction of an Asiatic black masculinity in the Nation of Islam and other Muslim communities.

Just as Trane’s “interest in spiritual ideas from around the world was accompanied by listening to the music of India, the Middle East, and Africa,” as Ingrid Monson has noted, his embrace of Islamic spirituality was influenced by listening to Malcolm X. Coltrane met jazz pianist Alice McLeod in 1963 and they married and raised four children to­gether in their Huntington, Long Island, home.

Alice Coltrane remem­bered, “As for Malcolm, I know he would go downtown and attend some of the talks that were in [New York]. Once he came back and I asked him how was the lecture, and he said he thought it was superb.”

In a 1966 interview in Japan, he was asked, “What do you think about Malcolm X?,” and the saxophonist answered, “I admired him. I admired him.”

Why was John Coltrane impressed with Malcolm X in 1964? First, they were kindred spirits in terms of their conversion experiences, which turned them away from drug addiction in the jazz world and led them to embrace Islamic and Eastern spirituality on Coltrane’s part and the Nation of Islam and then Sunni Islam on Malcolm’s part. They were both jazz brothers in spirit who became known for their “openness to self-transformation” on an international level. Malcolm X left the Na­tion of Islam in March 1964, made the hajj to Mecca in April 1964, and changed his name to El Hajj Malik El-Shabazz.

“He went to Mecca as a black Muslim and there he became only a Muslim,” adopting a univer­sal understanding of his religion, which paralleled Coltrane’s universal ideas about the power of non-Western religious and musical forms to uplift humanity. Malcolm received certification as a Muslim mis­sionary from Al-Azhar University and the Muslim World League after completing Islamic training in Egypt and Saudi Arabia in 1964. His human rights group, the Organization of Afro-American Unity, which he established in June 1964, supported the Pan-African values that Col­trane exemplified in his later collaborations with Olatunji and Lateef: freedom, self-defense, black economic and political power, education in community-based alternative schools and cultural centers, the sig­nificance of Afro-American history, social uplift of youth, freedom from drug addiction and alcoholism, reconciliation with Martin Luther King Jr. and other civil rights leaders, connections with the United Nations and the Organization of African Unity to support black liberation in the United States, and “workshops in all the arts… [as] an indispensable weapon in the freedom struggle.”

These forces culminated in the revo­lutionary politics of Malcolm X’s transnational communal masculinity as he cultivated pan-Islamic, Pan-African allies like the Egyptian presi­dent Gamal Abdel Nasser to support his opposition to anti-black racism in the United States.

On July 27, 1964, he spoke to Cairo’s Young Men’s Muslim Association and argued that the Egyptian leader’s “concept of Islam forces him to fight for the liberation of all oppressed people, whether they are Muslim or otherwise, because Islam teaches us that all humanity comes from Allah, and… has the same God-given right to freedom, justice, equality—life, liberty, and the pursuit of happiness.”

Malcolm’s opposition to the Vietnam War and his trips to Africa and Europe to promote his new religious and human rights agenda were also of great interest to the saxophonist, who was headed on a similar international path to perform his music, which eventually was called “a revolution in sound… that would release the true universal God he sensed lurking beneath the layers of confusion and hangup that Ameri­can society stuffs all black folk with.”

A Love Supreme (Impulse!, 1965) was recorded in 1964. John Col­trane’s autobiographical conversion story, which he told in the liner notes, mirrored the austere themes of Malcolm’s narrative of submission, deliverance, conversion, and pilgrimage to Islam that he narrated with Alex Haley in his autobiography. Coltrane wrote,

All Praise Be To God To Whom All Praise Is Due. Let us pursue Him in the righteous path… During the year 1957, I experienced, by the grace of God, a spiritual awakening which was to lead me to a richer, fuller, more productive life. At that time, in gratitude, I humbly asked to be given the means and privilege to make others happy through music. I feel this has been granted through His grace… As time and events moved on… I entered into a phase which was contradictory to the pledge and away from the esteemed path; but thankfully… through the unerring and merciful hand of God, I do perceive and have been duly re-informed of His Omnipotence, and of our need for and depen­dence on Him. At this time I would like to tell you that NO MATTER WHAT… IT IS WITH GOD. HE IS GRACIOUS AND MERCIFUL. HIS WAY IS IN LOVE, THROUGH WHICH WE ALL ARE. IT IS TRULY—A LOVE SUPREME—.

A Love Supreme shaped discussions about the interplay between African American Is­lamic identities and Coltrane’s jazz among his fans and musical col­leagues during the 1960s and beyond. Sold in American stores for the first time in February 1965, the album quickly became a hit among jazz fans and musicians. Malcolm X was assassinated on February 21, 1965, in the Audubon Ballroom in Harlem, and The Autobiography of Mal­colm X was published that year. Malcolm’s hajj to Mecca, conversion to Sunni Islam, Black Power speeches, travel to Africa, and provocative representations of black manhood made him the most famous Muslim in the United States and the world.

Because of the tenor of the times in which the golden age of jazz and the golden age of African American Islam collided in a burst of creativity, thousands of black Americans crit­ically considered Islam and converted to the religion, and among black youth in Philadelphia and other American cities, “there was a spiritual response” to the album, “a response to A Love Supreme like you would have to Malcolm… like you have with the emergence of black con­sciousness,” according to a jazz radio deejay in Philadelphia.

Amiri Baraka, the black poet, playwright, music critic, and author of Blues People: Negro Music in White America, sensed similar themes of black consciousness, Islamic spirituality, and Third World creativity in Malcolm X’s and Coltrane’s work and explained that “so much is made of Trane’s link with Malcolm in the 60s, because those periods are when art of that kind does emerge. You have social upsurges, and for every social upsurge, there’s an artistic upsurge that corresponds with that.”

The day after Malcolm’s death, Baraka publicized his plans for the establishment of the Harlem-based Black Arts Repertory Theater/School (BARTS), which used black art forms and artists to promote a ra­cially and culturally affirming African American identity through work­shops, performances, and cultural center activities focusing on music, drama, history, and visual art.

To generate money for BARTS, he put together a March 28th fundraising concert at the Village Gate in Man­hattan that included performances by his jazz musician friends such as John Coltrane, Archie Shepp, Sun Ra, Albert Ayler, Marion Brown, and Sonny Murray. The concert was recorded and became an album, The New Wave in Jazz (Impulse!, 1965), with a photo of Trane on the cover. This important East Coast wing of the Black Arts movement was in­spired by Malcolm X’s political ideas, and was committed to exploring free jazz, a style in which saxophonist Ornette Coleman led the way with his album This Is Our Music (Atlantic, 1960), and the Third World roots of jazz, of which John Coltrane became the driving force. 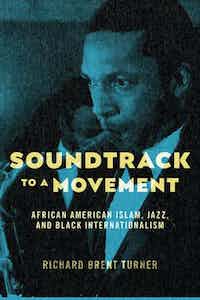 Richard Brent Turner is Professor in the Department of Religious Studies and the African American Studies Program at the University of Iowa. He is the author of Soundtrack to a Movement (2021); Jazz Religion, The Second Line, and Black New Orleans (2016); and Islam in the African-American Experience (2003).

23 new books to dig into this week. 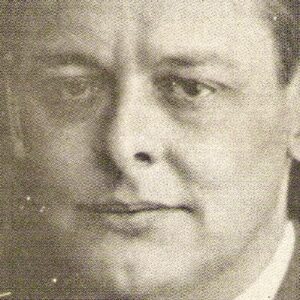