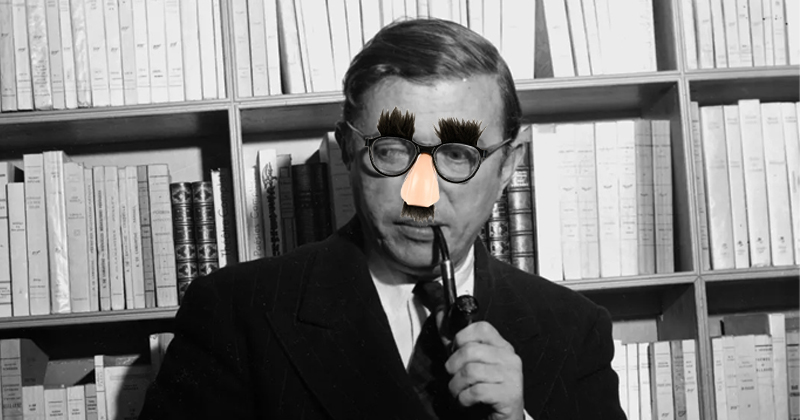 How Jean-Paul Sartre’s relentless pranking forced his teacher to resign.

In Jean-Paul Sartre’s novella The Childhood of a Leader, he wrote that there is “more destructive power” in pranks “than in all the works of Lenin.” Well, maybe if you are a headmaster who finds yourself unable to control a pack of unruly existentialist (graduate) students.

In 1925, when Sartre was a master’s student at the prestigious École normale supérieure (ENS) in Paris, he wrote and starred in a skit for the school’s annual revue, in which he poked fun at the school’s director, Gustave Lanson. “Bearded and proudly sporting a Legion of Honor medal, five-foot-two Sartre played a Lanson seduced by wealth, represented by a rich, gaudy, languishing Brazilian femme fatal, Doña Ferentes, played by six-footer Daniel Lagache.” That year, “the play was risqué but hilarious,” writes biographer John Gerassi, “and within traditional ENS burlesque standards.” The same was true for the next year, but in 1927, Sartre went too far. “Sartre let loose all his venom at the bourgeois state . . . he attacked France’s militarists and the country’s jingoistic patriotism with what he himself characterized happily and approvingly as ‘repugnant obscenity.'” Students, parents, and faculty, particularly Lanson, who had lost a son in the war, were appalled.

A few weeks later, after Charles Lindbergh had completed the first solo transatlantic flight, from New York to Paris, Sartre called up a bunch of Parisian newspapers to tell them that the aviator would be “feted as an Honorary Student” at the ENS on May 25th. The event was listed in the newspapers, and over 500 reporters and thousands of spectators showed up on the date to see a Lindbergh lookalike being lifted into the air by Sartre and his friends. “The public fell for it, and an old man even kissed his hand,” Sartre later wrote. But once the deception was made public, Lanson, already “severely despondent” after the most recent review and his reputation damaged by Sartre’s years of mockery, felt he had no choice but to resign. Brutal!