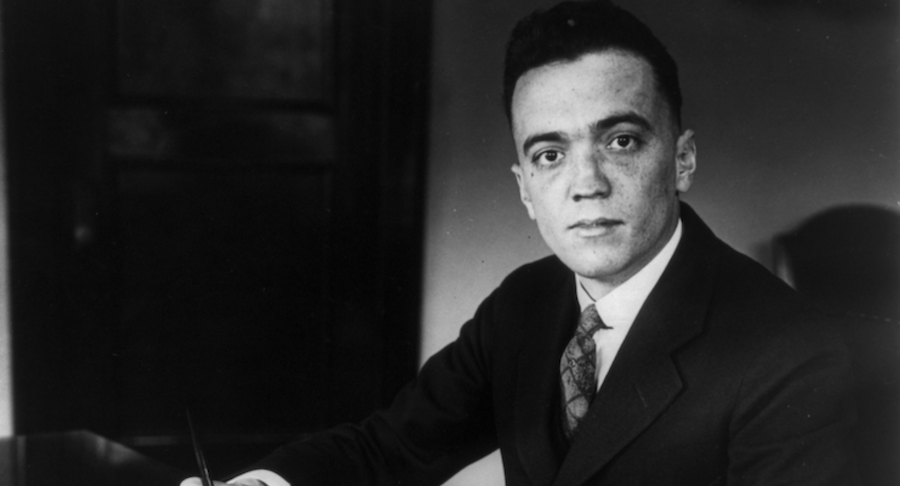 Tracking Adversaries, Hiding Evidence, and Other No
Good Dirty Deeds

Once a revered political figure the public looked to for advice on everything from crime to child rearing, J. Edgar Hoover—the former director of the FBI from its inception in 1935 to his death in 1972—is now known as a bigot who abused his power to squash progressive causes and spy on political enemies. Before the creation of the FBI, he headed the Radical Division in the Justice Department, where he orchestrated the Palmer Raids against communist and socialist immigrant groups. Under his leadership, the FBI started its COINTELPRO program to dismantle left-wing activism, known for stunts like urging Martin Luther King Jr. to kill himself and attempting to blackmail him with evidence of extramarital affairs. One could be forgiven for imagining Hoover as an omniscient boogeyman, spying on activists out to ruin his American dream.

In fact, Hoover was not omniscient, but the next best thing: a librarian with an extensive card catalog. While librarians are often cheered for democratizing knowledge, controlling information is the underlying tenet of the profession—which is partially why the profession today is largely categorized within information sciences. Hoover understood this from the time he joined the Library of Congress as a clerk, his first job in Washington, in 1913. He created catalog cards for the collection, which was then a novel way of organizing libraries. This experience would later help him to index thousands of citizens he deemed radicals, as well as obfuscate evidence to avoid accountability. Hoover’s methods of manipulating information represents all that can go wrong when the principles of librarianship are used to combat public good.

The Library of Congress’s card catalog was a relatively new invention in 1913. Up until that era, libraries had organized their collections any way they saw fit. The Library used the same classification system it inherited from Thomas Jefferson in 1815 for 84 years, which divided the collection into three main categories—Memory, Reason, and Imagination. Jefferson had based this model on a classification schema of Sir Francis Bacon, and translated Memory to mean history, Reason to mean philosophy, and Imagination to mean fine arts. The Library made additional modifications, so that there were 44 subcategories covering everything from pastoral poetry to ecclisiastical law, but the general system was in use until 1899.

By that time, librarians like Melville Dewey and the Boston Anathaeum’s Charles Cutter were advocating for standardized card catalogs across all libraries but the Librarian of Congress at the time, Ainsworth Spofford, resisted, insisting that a library’s organization was subjective. Spofford was known for his near photographic knowledge of the Library’s towering collection, but the Library’s antiquated systems meant that using the collection was difficult for patrons. Dewey and Cutter hoped that subject-based card catalogs would democratize information for users, since they were easier to produce, update, and browse. In fact, during the French Revolution, catalogers tried to use playing cards to create a library system precisely due to their accessibility.

The Library of Congress finally went the way of the French in 1901. When Hoover joined the Library in 1913, they were a leader in information organization, producing around 700,000 cards a year that they distributed to libraries across America. By 1917, however, he had finished law school and needed a new job.

Hoover created a card-based organizational system for all things “subversive.”

Around that time, the draft was put in place for World War I. Hoover had signed up for military service but, with an ailing father at home, needed to stay behind to care for his family. His uncle helped him obtain a draft-exempt position in the Justice Department’s War Emergency Division. There he would eventually oversee the Alien Enemy office, meant to track German immigrants on American soil. The Justice Department had been keeping secret files on immigrants engaged in radical politics since 1903, and at his new job, Hoover would be introduced to all manner of espionage and secrecy. By the end of the war, he asked to stay on at the Justice Department and by August 1919, Hoover would be named head of the newly created Radical Division.

The Justice Department already had an organizational schema for their files on suspects, which Hoover was introduced to at the Alien Enemy division. But as head of the Radical Division, Hoover was able to refine this system based on his library cataloging days. In place of book titles and authors, Hoover created a card-based organizational system for all things “subversive.” Each of Hoover’s cards had its own code and list of possible affiliations, so that he could easily pull files on any radical and cross-reference them with other individuals, organizations, and publications. While FBI literature has denied Hoover took inspiration from the Library of Congress, historian Kenneth Ackermann notes that his catalog looks much like the Library’s card catalog. Hoover himself wrote in a 1951 letter that the Library “gave me an excellent foundation for my work in the FBI where it has been necessary to collate information and evidence.”

Hoover found it necessary to track citizens who weren’t directly affiliated with socialist and communist groups, too. Isaac Schorr, for example, was a lawyer who, in 1919, coached some of the immigrants detained in one of the Palmer Raids through a silence and hunger strike. For complicating Hoover’s deportation plans, Schorr was added to the catalog under code “OG (Old German) 377465,” a holdover classification from World War I-era spying on German immigrants. In fact, Hoover’s former boss, who had approved the creation of the original Old German files, earned himself a card (OG 384125) when he publicly spoke out against Hoover’s zealous detention efforts. By 1921, Hoover had amassed 450,000 cards and had dedicated staff to maintain them.

Hoover’s clerk days also taught him how to hide information away. He realized that if he mislabeled a card with the wrong classification number, or a librarian shelved a book in the wrong location a library patron would barely, if ever, be able to find it in the Library’s vast collection—a tactic he would consistently riff on throughout his career. Since the FBI is a government agency, any official documents that passed through its Central Records Division are theoretically subject to the review of various entities, like the Justice Department, and discoverable in certain situations, like during trials. By misfiling and mislabeling more scandalous information, Hoover could make it hard for any overseeing agency to discover what he was really up to. When the future Supreme Court Justice Felix Frankfurter opposed the Palmer Raids, Hoover filed him away under the group “National Popular Government League” a coalition of lawyers that had opposed the raids. Much like the former Librarian of Congress Ainsworth Spofford navigating a towering collection, only Hoover knew how to find Frankfurter among thousands of names. These seemingly innocent misclassifications would grow into a series of malignant policies instituted to hide illegal activity.

This was especially true after the 1949 Judith Coplon trial, when Coplon was accused of passing on sensitive FBI documents—including some Hoover called “pink memorandums”—to a Russian spy. The pink memorandum policy was instituted to keep espionage requests that special agents sent to their supervisors out of the FBI’s official files by mandating that these requests be written on pink paper that would be destroyed within six months of being read—the sooner, the better. In court, these memos revealed that the FBI was spying on American citizens suspected of being communists. To the American public, the Coplon trial revealed the extent to which the FBI engaged in wiretapping. Worse yet, it revealed how emboldened FBI agents felt hiding information from the Justice Department and the court—FBI agents had perjured themselves by denying knowledge of any wiretapping, leading a judge to overturn Coplon’s conspiracy and espionage charges. Embarrassed, Hoover went on to institute several new information policies meant to mask the extent of the FBI’s spying, seeking as always to make any documentation of illegal methods disappear within the bureaucratic machinations of the FBI.

Hoover required agents to store requests for break-ins and other illegal activities in satellite FBI offices, where they would be routinely destroyed in order to evade accountability. But this tactic would also be his undoing; when The Citizens Committee to Investigate the FBI broke into a small field office in Pennsylvania in 1971, they found a rich trove of documents that revealed the extent of the FBI’s illegal practices, giving them enough information to fuel public outcry for greater government transparency.

Today, transparency still has its limits. While some of Hoover’s earlier files are now available to view at the Library of Congress, many were classified as “personal and confidential” so that they would not be indexed by the Central Records Division. They were later destroyed by Hoover’s longtime secretary, Helen Gandy. Surviving files from less-thorough FBI officials offer glimpses into the extent of Hoover’s illicit activities—one revealed extensive spying on a businessman who had boasted he had proof Hoover was gay.

Regardless, Hoover’s bureaucratic sleights of hand are still at work. We know only a fraction of his misdeeds by name. We know the raids that illegally jailed hundreds of immigrants as the Palmer Raids, despite their being orchestrated by Hoover; similarly, John Sbardelatti notes that McCarthyism could have just as well been called Hooverism for all the FBI’s backstage direction. Thanks to his tireless work hoarding and obfuscating various files, Hoover is still directing the historical record from beyond the grave—just as any devoted information professional would.

Alana Mohamed is a writer and librarian whose work has appeared in the Village Voice, The Atlantic, and Longreads. She is working on a series of essays about being late to the proverbial party.

Illustrating the Domestic Bliss of Alice B. Toklas and
Gertrude Stein

The 75 Best One-Star Amazon Reviews of On the Road 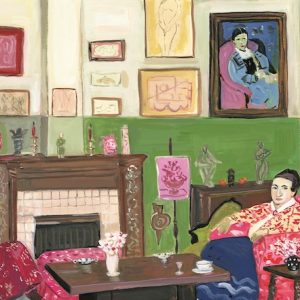 Illustrating the Domestic Bliss of Alice B. Toklas and
Gertrude Stein

Maira Kalman, author and illustrator of children's books as well as a frequent contributor to the New Yorker, has illustrated...
© LitHub
Back to top