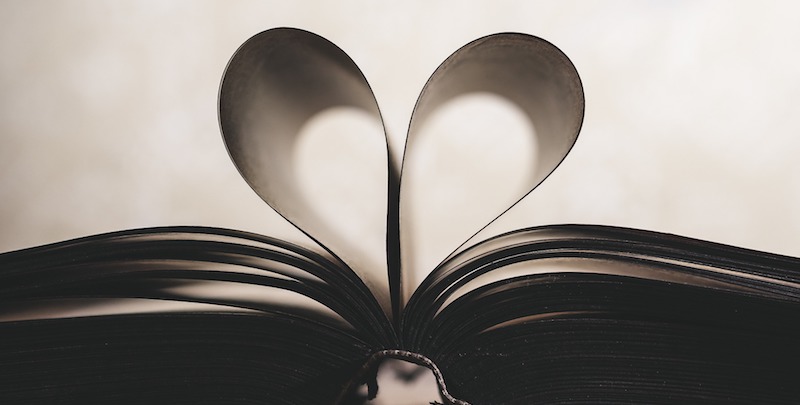 How I Found Love One Literary Event at a Time

When I tell this story, which I do neither often nor in full, I like to say I took him in at a glance and then promptly wrote him off. He was too many of the things I found appealing, which meant I could be blinkered into missing something––my pro forma defence against any risk-taking that might end in hurt.

We met at a graduate residential college, a modernist building in the heart of Toronto that had elbowed its way into the Oxbridge tradition. I didn’t want to be the type who opened with “tell me about your work,” such careerism seeming bleakly on-brand for a law student, but when someone said he studied contemporary literature I couldn’t hold back. It was orientation week and we’d both been lassoed into a giant Scrabble game; I felt smugly virtuous that a reason to engage him had been handed to me, rather than requiring any orchestrations on my part. We were hallway neighbors with excuses close at hand—can I borrow, do you want, are you free—and I thought I didn’t have a shot, so like the innocent I was, convinced myself I didn’t fancy one.

That’s probably why I found it easy to start inviting him to readings. He’d mentioned that he studied Zadie Smith, who was scheduled to appear in Toronto that fall. I’d planned to go anyway and asked him to join, along with another friend of mine. Inside the theater, large and dark enough to be anonymizing, I combed over details that seemed innocuous: the ease of having kept our talk buoyed all the way down to the waterfront and the novelty of our bodies together in new space, having only been proximate inside the college walls.

Zadie Smith, along with Aleksandar Hemon and Caryl Phillips, was being interviewed by radio personality Eleanor Wachtel. The crowd had a palpable indulgence for Wachtel; as the host of CBC Radio’s long-running show “Writers & Company,” she’s led Canadian listeners through 30-odd years of literary conversations. Having never been among their number, I lacked the context for her onstage manner––her frequent, molasses-voiced interruptions to announce her name and the show’s title. The talk was being recorded for broadcast, which meant Wachtel would leap in at odd intervals, often mid-sentence (but never her own), to set the scene for those ghostly future listeners “just tuning in.”

There’s a certain set of points that constitute my sweet spots for any literary event, and this one hit them all—writers giving insight into their process; raving over whatever’s on their nightstands; describing the states of bookish absorption they’d slip into as kids, long before the demands of life and work. I was especially hungry for this kind of comfort, a promise that, despite the rigors of law school, I could still access some portal to the literary. Or, more shamefully, that I might possess the same building blocks—obsession with sentence craft, nostalgia for childhood reading, hunger, drive, taste—to one day take part in similar talks myself.

I said none of this aloud. I kept my post-show comments to the interview; the awkward union of radio and stage, the jaunty swing of Zadie’s new box braids. We filed up separately as she signed our books. We rode the train home together. We reheated our meals and chewed them in our separate rooms. There was nothing sexy about the first time, which may be why I kept believing in the perfect neutrality of “going to a reading” for so long after that.

I don’t slip easily into friendships, but proximity bred natural intimacy. This, at least, was what I told myself as I sat on his couch one morning, drinking coffee he’d brewed to outdo the grad school sludge. I was both a new law student and recent suburban expat, traits that conspired to equip me with supercharged notions of private property and personal space. Knowing nothing of campus life, I had to remind myself that perching on your neighbor’s couch was less the tip of the iceberg than a chip in the sea—a type of connection likely to dissolve, perhaps leave a chill in its wake.

When he asked me to go with him to hear Juliet Jacques discuss her memoir, Trans, with Sheila Heti, it was easy to read it as pure politeness. It was at the bookstore I’d once mentioned was my favorite, I’d read Heti’s best-known book, and the Smith event had been a few weeks prior. We played it like a simple quid pro quo. I operated under a baby law student’s idealization of contract, a clean meeting of minds between parties. “Do you want to go to a reading?” is not “Do you want to go on a date?” He’d asked, and I’d said yes.

Back in my room, I stared at my day planner and sipped my upscale coffee, which stung with a strength I wasn’t accustomed to. The event was scheduled for a Sunday night, an evening that my parents had expected I would continue to pledge ad infinitum to the nest I’d newly left. These dinners were a needed escape from the bubble, a rare guilt-free instance where I let myself put down the legal casebook. I’d be missing it for the first time. The split between the reluctance I ought to feel and did went largely unexamined.

The distance between our rooms was small enough that, come Sunday, I just hovered behind my door until I heard his open, creating the illusion that we’d arrived in the hall simultaneously. Knocking on his door still felt too intimate; waiting for a knock on mine, presumptuous. On the train, we talked about our work again. His dissertation was on authorship. It focused on contemporary writers who, having been schooled in critical theory announcing the death of the author, were faced with the question of how to be authors at all: a problem with which I had a more than trifling familiarity, and not just because—like many book-smart, love-starved undergrads—I’d nurtured a brief, intense thing for Roland Barthes during my English degree.

I’d told him I was a writer the way you bring up anything you’re clearly not pursuing professionally: that given its relevance it would be strange not to disclose, but with the hope that, having done so, it need never be mentioned again. In a law student, even one cushioned by a literary background, it seemed an unforgivably hackneyed affectation. I stubbornly kept up a writing practice as a means of survival, but its maintenance brought with it a curious shame: at day’s end, I’d close my casebook and pull a stack of pages off the shelf. Stretched out on the carpet, I’d go through my novel manuscript line by line, giving brutal edits to a version of myself it was hard to believe had once lived and breathed. I’d become, to my mind, the worst type of cliche.

Somehow, in my resolution to keep things between us entirely clear, I’d wandered into the edge of something clouded-over.

Hearing Juliet Jacques was a master class in engaging the political through personal writing. For most of my life, with its fiction-only diet, I was slow to note literature’s political axis—especially in those books where it seemed absent. In conversation, Jacques swung with enviable grace between scales fine-grained and societal. She’d talk about herself and her transition with precise introspection, before striking out to briefly sketch or indict something sprawling like the medical system or the whole of England. I felt the sinking certainty that my work could never hope to be so engaged, so rigorous about writing selfhood and its social implications. I tried to explain this as we walked back to our residence, the agreed-upon reason being that we didn’t want to spend subway fare. I was starting to unearth the sensation—not quite an admission of desire but not its denial either—that I could tell him things I couldn’t say to other people. About my work, my fear that I’d hobbled it forever by throwing in my lot with law. We walked the 40 minutes back to campus, unfailingly polite in coordinating our strides. A couple blocks from home, we stopped for pizza.

Somehow, in my resolution to keep things between us entirely clear, I’d wandered into the edge of something clouded-over. But I found its mist more nourishing than toxic. There’s a certain freedom to nudging forward inches at a time, only able to see a few feet beyond yourself: you’ll be a better literary citizen, scanning local lists with an open mind. You’ll self-censor less, seeing book-related talks as doors instead of windows. You’ll invite him out again.

It was out of character for me to mention Jessa Crispin, whose then-new book, The Dead Ladies Project, traversed the works of white people I had little interest in. The proper draw was her interviewer, Emily M. Keeler, a Toronto writer and editor we admired. But the outings meant more, now; they were part of a much larger dialogue. We lived within shouting distance and yet had amassed a lengthy correspondence, a message thread that bristled with the literary internet. We would think together, push one another to be part of the public discussion. In the same way as loving or writing good sentences, imagining yourself into cultural conversations is like a muscle that enables a new range of creative motion. It was also, by then, an excuse to be near him. When I asked him to go with me to Crispin’s reading, extending the invitation was both easier and harder––I had a higher batting average, but more on the line.

That night was useful for how it shaped our conversations—helping me articulate, to my eternal relief, my aversion to a certain brand of white feminist writing—but disorienting for the way things between us had slid from neutral into charged. How we overshot the route to the bookstore, lost in talk. How we huddled over Renata Adler’s Pitch Dark before he leaned over me to replace it on the shelf—the pang of that lost closeness made me buy the book. I was hurtling toward my inaugural law school exams, but just beyond the ridge lay winter break, when I’d bring to the page a semester’s worth of suppressed energy and immersion in literary culture. The break was a time, too, when most people would desert the college, but the two of us had plans—each disclosed with careful nonchalance—to stick around.

That night was useful for how it shaped our conversations—helping me articulate, to my eternal relief, my aversion to a certain brand of white feminist writing—but disorienting for the way things between us had slid from neutral into charged.

Eighteen months after that first reading, Zadie Smith returned to Toronto. I’d brought along White Teeth and Swing Time for signing, having had my copies of On Beauty and NW inscribed a year and a half previously. We filed up to the table together. Zadie flipped open his copy of Changing My Mind, a text that was central to the dissertation’s second chapter.

“Are you the boyfriend?”

They talked about their work as she scribbled her name into his book, after which she gestured toward my mother and me, waiting off to the side. Zadie’s voice was very solemn as she said to him,

“Congratulations on all this.”

Tajja Isen is a Toronto-based writer and voice actor. She has written for Longreads, BuzzFeed, Broadly, Bitch, The Globe and Mail, Electric Literature, The Rumpus, and Catapult, where she is also a contributing editor.

A Brief History of Children's Books: Nasty, Brutish, and Short 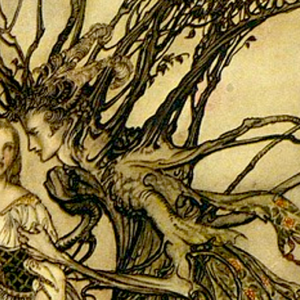 A Brief History of Children's Books: Nasty, Brutish, and Short

Because I like to read, friends were surprised, when I had our daughter, that I read so little to her. The problem wasn’t...
© LitHub
Back to top