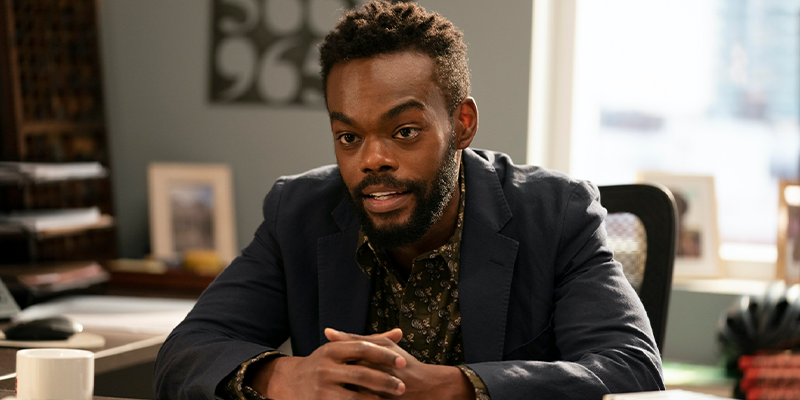 How HBO’s Love Life addresses the whiteness of the publishing industry.

HBO’s Love Life returned for a second season in October, with the beloved William Jackson Harper taking center stage as Marcus Watkins—a book editor! This was thrilling to me because 1) I run the Book Marks Instagram, for which I spend all my free evening TV time taking screenshots of actors standing in front of books and 2) even though I spend all day thinking about the industry, I apparently can’t get enough.

Hollywood is also obsessed with writers and editors in particular. (See: Younger, The Bold Type, Sex and the City, and don’t even get me started on the You’ve Got Mail/How To Lose a Guy In Ten Days/13 Going on 30 rom-com era.) They think we’re Hollywood-adjacent: creative types, but not too close to their own industry. They mistakenly believe that we can afford nice things, like cab rides and apartments with natural light.

While Marcus Watkins is seldom seen on the subway, there was something strikingly relatable in his character, something I had never seen in Hollywood’s portrayals of books/media before: his frustration at the industry’s diversity problem.

The show doesn’t shy away from it. Within fifteen minutes of the first episode, we have Marcus sitting at his desk, talking to a Black writer, Trae Lang (Jordan Rock) and trying to convince him to sign with the publishing house. From the second Trae walks through the door, he’s not afraid to share what’s on his mind: “What are you? Head of the Urban Division?” Marcus responds, “I try to create more opportunities for writers of color, sure.” He goes on to discuss the merits of Trae’s manuscript and the ways they can “refine it,” to which Trae responds, “Now they’ve got Black dudes telling me it’s too Black instead of white guys.”

We are to understand that Marcus has been trying to champion Black writers his whole career, but that he’s been met with a lot of resistance from his predominantly white colleagues. He even sends his crush, the great Mia Hines (played by Jessica Williams), a manuscript he feels passionately about but that his colleagues can’t be bothered with. It’s a work of science-fiction, set in an alternative universe in which Haiti was never colonized. (10/10 would read! Pretty sure sharing the text with someone outside the house breaks some sort of confidentiality clause, Marcus, but okay.)

The rest of the show goes by. Marcus falls in and out of love numerous times. No spoilers! His job is relatively ancillary to the plot, but still worth tracking.

The episode before the season finale starts with January 2020. The pandemic comes crashing into the show, much like it did in our real lives. One minute, the characters are at a New Year’s Eve party, and the next, they’re clutching their laptops closely to their chests in the elevator, turning away from the one person who dared sneeze. (It’s jarring, isn’t it? For TV to be catching up to us.) There are furloughs, but Marcus is kept on. He’s told he’s one of the lucky ones—as his workload increases exponentially. And then the summer of 2020 happens. George Floyd is murdered, and the Black Lives Matter movement gains more traction. Everyone is posting black squares on Instagram. On a Zoom call, his Nice White Boss (Steven Boyer) asks him to green-light their Statement of Solidarity, since he is their only Black employee. That was, justifiably, the last straw. Marcus quits on the spot, citing the publishing house’s longstanding track record of institutionalized racism and general disinterest in stories by marginalized writers.

It was a real moment of catharsis, watching Marcus vocalize what is writhing under the surface of our industry. He becomes a freelance book editor. Then the love of his life gives him the courage (and the cashflow) to spin his rage into gold, to work full-time on a novel about his experiences in publishing.

As its name implies, Love Life is very much a show about the relationships that shape us. It’s about the people who break our hearts, the friends who lift us up, the family members we inherit our trauma from. It’s about our changing relationships to ourselves and the great love we find after we have endured everything else, the fairytale ending. Because the connective tissue of these episodes is love and personal development, the careers of these characters take a bit of a backseat. Don’t get me wrong: I’m thrilled Marcus quit! Someone had to! The very fact that the show calls out these egregious problems in publishing felt revelatory. His anguish about the stories that are being ignored felt relatable. His solution at the end? Less so. I guess the rest of us are still waiting for a kind of happily ever after here. Still, it’s a start.