How Gerrymandering is Destroying American Democracy

Your Nightmare Scenario for the 2018 Midterms

Imagine, if you would, the following scenario:

It is election night. Democrats have won the national popular vote in the battle for the House of Representatives by six points, 53 percent to 47 percent. Yet Republicans still retain control of the House, because despite that deficit, the distribution of the national vote nonetheless allowed them to prevail in just enough individual House races to hold a slim two-or-three-seat majority.

President Trump’s Twitter-thumbs spring into action, unleashing a volley of his trademark all-capital-letter tweets: “GREAT NIGHT FOR REPUBLICANS!!!” Never mind that Democrats actually won a fairly substantial voting majority in historical terms; right on cue, the TV blowhards fill the airwaves with insta-analysis, declaring the election a major repudiation of the Democratic critique of the Trump presidency and a ringing public reaffirmation of the Trump agenda.

News flash, readers: This scenario is not far-fetched. It could very well play out in 2018. Or, if you are reading this after the 2018 election, one can envision a similar one in 2020, or even in 2022. It is a perfectly realistic possibility that in any one of these upcoming elections, Democrats could win the House popular vote by a sizable margin, but still end up in the minority, with Republicans in control of the lower chamber after the votes have been counted.

The reason for this is simple: Because of the way House districts have been drawn around the country, millions and millions of votes for Democratic candidates in House elections in effect are expendable. This is to no small extent by design—specifically, the design of Republicans who drew most of the lines shaping and defining those House districts in the last decennial redistricting back in 2010. This helped determine which voters are in each of those districts—that is, it helped determine the makeup of their electorates. In most states, the lines for House and state legislative districts are drawn by state legislators—the Constitution left it to states to determine how elections are held—and Republicans control far more state legislatures nationwide than Democrats do. This has allowed Republicans to rig great swaths of the electoral playing field in their favor, by drawing district lines with the explicit goal of degrading the value of Democratic votes and maximizing the value of Republican ones—and many of the voters who have essentially had their votes degraded do not even know it.

This is the state of affairs as we head into the 2018 and 2020 elections, but it could endure into the next decade if Democrats don’t regain more influence over that redistricting process first. (District lines are redrawn every ten years, corresponding to the release of the census, and the next redistricting isn’t until 2021.) Here’s the reality: If Republicans retain a good deal of control over the process, they could redraw many district lines across the country to their own benefit once again, and the playing field could remain rigged in their favor deep into the next decade.

Democrats can take big steps toward reversing this conundrum. But first they have to reverse the massive catastrophic blunder that landed them in this fix in the first place.

A lot is riding on the 2018 and 2020 elections—not just because control of the House and Senate is at stake, but also because they include state legislative and gubernatorial contests across the country. And those outcomes, by deciding who controls state governments, will decide who draws the electoral maps for the House and state legislatures in the next decade. One reason the stakes are so high in this regard is that the Supreme Court failed to step in and put a check on extreme gerrymanders when it issued two widely anticipated rulings in June 2018. The Court declined to embrace the argument of challengers who claimed that extreme gerrymanders—the most closely watched case was in Wisconsin, and a related case was out of Maryland—should be declared unconstitutional on the grounds that the gerrymanders had diluted the power of voters, by deliberately drawing lines to degrade their votes for the express purpose of entrenching their party in power. (It’s worth noting that one of these gerrymandering challenges was from Democrats against Republican-drawn districts, while the other was made by Republicans challenging a Democratic-designed map—proof that both parties play this ugly game when given the opportunity. That said, Republicans are the ones who have pushed strategic cartography in recent years to far more indefensible extremes.)

Crucial to the dark art of gerrymandering—and to the argument against it mounted by the challengers—is the tactic of wasting votes. To do this, wily mapmakers carve up districts with a simple overriding goal: voters supporting the opposing party must be distributed to ensure that their party wins fewer seats, but wins them by much larger margins, even as the mapmakers’ party wins more seats but by smaller (albeit still comfortable, “safe”) margins. Thus, the opposing party’s votes have been distributed in a manner that “wastes” them. If this is done successfully in an aggregate way, the overall percentage of seats the opposition candidates win will not keep pace with the overall percentage of votes they win.

How does this work? Picture a state of 1,000 people, made up of 500 Republicans and 500 Democrats, spread across four congressional districts, each composed of 250 people. Democrats are more concentrated in some areas than Republicans are, because Democrats tend to live in urban areas, but in theory, you could draw electoral borders with relative ease so that each district had an even number of 125 Democrats and 125 Republicans apiece. But what if you exploited the concentration of Democrats to draw a series of districts so that one district was packed with substantially more Democrats, leaving minorities of Democrats in each of the remaining three? District 1 would have, say, 200 Democrats and only 50 Republicans, so Democrats would be guaranteed to win that one district by a huge margin every time. But in Districts 2, 3, and 4, there would be 150 Republicans and 100 Democrats in each, enabling Republicans to win in all of those by comfortable margins—albeit not as big as the margin Democrats win by in District 1. The Republicans would have rigged the map to waste a whole lot of Democratic votes, enabling Republicans to win three out of four districts—comfortably, but not overwhelmingly—in an evenly divided state. This is a very extreme hypothetical, to be sure, but as we will see, the reality in some cases has also been shockingly outlandish.

As it happens, this cynical tactic is by and large perfectly legal, and in certain respects it represents a rational response to the system as it functions now. Partisan mapmakers on both sides are incentivized by the rules to try to maximize their own gains this way. Indeed, Democrats have their own long and sordid history of doing this, and in some states they have continued to do so. But in recent years, Republicans have pushed this tactic to new heights—or depths. Take the aforementioned case of Wisconsin. The GOP-drawn map allowed Republicans to win around half of the statewide vote for assembly candidates in 2012 and 2014 but at the same time win nearly two thirds of the assembly’s 99 seats both times. Challengers to this cockeyed arrangement had hoped the Supreme Court would embrace a complex formula that would delineate when a gerrymander has deliberately wasted the opposition’s votes to an unacceptable degree. But the court punted and put off any decision on the underlying dispute about whether such lines can ever be declared invalid. This preserved the status quo, leaving the parties largely free to keep on trying to rig House and state legislative elections to a maximal degree in their favor into the next decade. With Republicans in control of so many state legislatures and governorships—and over so much of the redistricting process—this means the pressure on Democrats to win back ground in the states is urgent and enormous.

The roots of this brutal political reality for Democrats can be traced back to a massive self-inflicted wound, as well as a spectacular confluence of factors that delivered a political bonanza for Republicans that they ruthlessly and nefariously exploited in a manner that continues to degrade our politics in all kinds of ways. That confluence is as follows. Republicans had the good fortune of entering into a midterm election in 2010, two years into the presidency of Barack Obama, when several crucial ingredients were in place. First, Obama faced the headwinds of the most horrific economic crisis in seventy years, meaning the backlash to his presidency was probably guaranteed to be a good deal fiercer than the backlash that historically pummels the party of the president in his first midterm. Second, that coincided with the decennial census, meaning that the state legislators propelled into power by that backlash would draw many of the House electoral maps in states across the country for the next decade. Those things dovetailed with developments in the technology of map drawing that made it ever easier to slice and dice constituencies for partisan advantage with mind-boggling precision.

The overconfidence of Democrats was another crucial factor, as party leaders appeared largely oblivious to that gathering storm. After Barack Obama’s 2008 victory, Republicans seemed shattered, in total disarray, and severely on the defensive in the face of the inexorably changing demographics on display in Obama’s victory at the hands of a popular majority of unprecedented racial diversity. The Democratic Party seemed solidly positioned to pass major progressive priorities into law and further entrench their majorities, and many prominent Democrats were preoccupied with the glamour of their takeover of Washington and with the task of setting about governing, as opposed to keeping their mind on the less romantic state-level contests to come. The failure to see the GOP’s surprise strike coming was arguably one of the greatest strategic disasters presided over by the Democratic Party during the last decade. It helped pave the way for unbreakable GOP dominance of the House for most of Obama’s two terms. 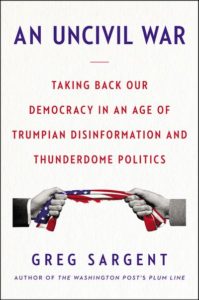 From An Uncivil War: Taking Back Our Democracy in an Age of Trumpian Disinformation and Thunderdome Politics. Used with the permission of Custom House. Copyright © 2018 by Greg Sargent.

Greg Sargent writes The Plum Line blog at the Washington Post. Previously, he wrote for New York magazine, the New York Observer, Talking Points Memo, and numerous political websites. He lives in Maryland with his family.

Jane Coaston and Alexander Chee on Politics, Storytelling, and the Midterms 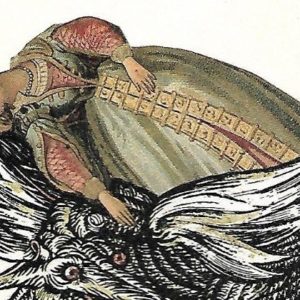 The little hand serving me coffee is also the hand that wrote the novel La ‘Flor de Lis.’ It seems absurd a writer of such...
© LitHub
Back to top
Loading Comments...