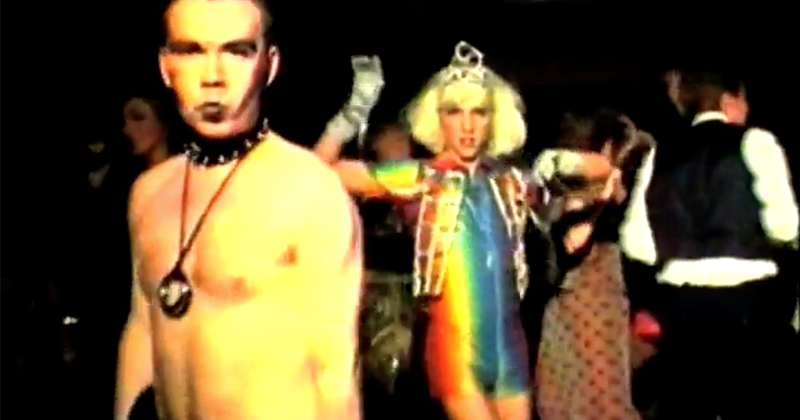 How Gay Liberation Sparked the Nightclub Scene in London

Peter Ackroyd on AIDS in the UK, Clause 28, and the Gay Liberation Front

Social change, prompted by the unknown laws of life, is inevitable. The Gay Liberation Front (or GLF, as it came to be known) marked what seemed to many to be the first assertion of gay identity without apology or equivocation. The meetings were as likely to be made up of hippies as white-collar workers, of students as well as teachers. It represented, therefore, the single most vocal sexual opposition to what soon became known (at least among many queers) as “straight” culture. Straight culture was the culture of the suits, of the politicians, of the businessmen, of the journalists, of the police, of the judiciary and of the “authorities”—that is, anyone who, according to their opponents, thought they knew better than you did. They were the members of the “establishment.”

The GLF was established or, rather, came together in Highbury Fields, in November 1970, largely as a reaction against a dubious arrest in a public urinal. It was borne out of rage, and defiance, against harassment. In the month before some students had agreed to attend weekly meetings at the London School of Economics, partly in response to the “Stonewall” riots of New York in the summer of 1969. In the manifesto of the GLF the demand for equality was accompanied by a rejection of discrimination. In the summer of 1972 the first Gay Pride march was held. Its colorful supporters walked from Trafalgar Square to Hyde Park; in various incarnations it has continued ever since. Gay News was first published in that summer, testifying to the broader sense of community and self-assertion in those who were even then learning to be called and to call themselves “gay.” Coincidentally or not—it is said that in London there is no such thing as coincidence—Spare Rib, the first radical feminist magazine of its type, was established at the same time. More than one bookshop catering for gay readers opened in London.

Like many altruistic endeavors the Gay Liberation Front came to pieces in the end, shipwrecked by internal dissension and recrimination. It was divided largely between the different aspirations of men and women, between those who supported active and radical protests and those who did not, between the socialists or the New Left and various anti-authoritarian or counter-cultural movements. Some preferred flower power while others campaigned for street power. The GLF could not contain its contradictions. But its legacy remained in the number of subgroups such as the Gay Black Group and the Gay Teenage Group, as well as in the less tangible but equally significant new mood of resolution and independence among queer men. Not all queer men were enthusiastic about the sudden exit from the closet; some thought it in bad taste, while others were simply alienated by the pack mentality which solidarity sometimes espoused. It was all too grim and self-righteous for many of the less committed. For others, however, the burgeoning of GLF meetings, gatherings and parades offered the opportunity for picking up sexual partners outside the claustrophobic atmosphere of clubs and pubs. Yet many others still, perhaps the majority, lacked the self-confidence openly to proclaim themselves in the face of a hostile or indifferent public. They did not wish to rock the boat.

Yet ironically it was the movement towards queer liberation that helped to prompt the extraordinary growth in nightclubs in London; these tended to be multi-leveled discotheques in which dazzling light and sound helped to encourage an atmosphere of fevered sexuality. In 1976 Bang! was opened on Monday nights at the Astoria off Tottenham Court Road, and was soon succeeded by others in the vicinity and elsewhere. The thumping beat of disco music and the gyrations of scantily clad customers helped to define a movement of hedonism and consumerism that seemed set to define queer London of the 1980s.

And then the music stopped.

By 1982 there were rumors of a new illness. The year before, five young men had succumbed to a rare form of pneumonia in Los Angeles; in the summer of the following year Terrence Higgins died in St. Thomas’s Hospital, London, of what seemed to be a related condition. The bad news was at first greeted with disbelief and even denial. It was an American disease. It would pass. A cure would soon be found. All of these bland prognostications faltered as the condition spread wider still and wider. It soon became known as “gay men’s cancer” and then, as its virulence increased, “the gay plague.” As information about its nature spread it was known more neutrally as AIDS or “acquired immune deficiency syndrome.” Suddenly everyone knew what the “immune system” was and what its “deficiency” meant.

“The thumping beat of disco music and the gyrations of scantily clad customers helped to define a movement of hedonism and consumerism that seemed set to define queer London of the 1980s.”

This new condition seemed to stalk gay men, inducing horror, helplessness and confusion. The varieties of symptoms were endlessly discussed in an atmosphere where panic was mingled with ignorance. It became known that some forms of AIDS led to blindness, others to skin cancer and still others to pneumonia. The newspapers took delight in publishing photographs of gaunt, emaciated men.

The earliest sufferers were often stigmatized. They became outcasts, abused or ignored by the general population and treated only with extreme nervousness and caution by the medical

profession. Many dentists were suddenly unavailable and most medical procedures were accompanied by precautions that resembled the after-effects of a nuclear explosion. AIDS appeared to be a death sentence and, perhaps because many of its victims were very young, there were few means of coping with dying. AIDS induced fear, depression and almost constant panic. There was, for many, nothing ahead except darkness.

When it began to hit friends and acquaintances, the reality became almost too great to bear. The symptoms were feverishness, trembling, shuddering and sweating, failing sight, disabling diarrhea, or general nervous lassitude. The only palliatives were painkillers, self-administered injections, endless pills of unknown provenance, tubes, injections; the regular visits to the hospitals were of course demeaning enough, but not so bad as the periods in the wards where you might lie beside a bed in which a young man was curled up in preparation for death. Fellow sufferers served only to intensify the misery. It was as if they were neither living nor dead. The feeling of helplessness was increased by the suspicion that the prescribed medicines themselves were responsible for some of the more morbid symptoms. Did the doctors know what they were doing?

The general and public reaction was largely one of indifference or even hostility. It was believed that queer men “had brought it on themselves,” that it “was all their own fault” and that they “deserved it.” Attacks on queer men did not diminish in intensity. The level of public hostility was emphasized in 1988 by the Conservative government’s introduction of Clause 28 into the Local Government Act which decreed that “a local authority shall not (a) intentionally promote homosexuality or publish material with the intention of promoting homosexuality; (b) promote the teaching in any maintained school of the acceptability of homosexuality as a pretended family relationship.” One columnist in The Times declared that “this country seems to be in a galloping frenzy of hate, where homosexuals are concerned, that will soon, if it is not checked, lead to something like a pogrom.”

The queer reaction to the bigotry was one of understandable fury, but it was now alleviated by one small consolation. The horrors of the AIDS epidemic, and the need for voluntary cooperation in trying to deal with the effects of the

condition, had lent a sense of communal identity to many of those who might otherwise have gone separate ways. Some were enraged by what they considered to be the insufficient official response to the crisis, and saw Clause 28 as another attack upon the rights of what by then had become known as the “gay community”—even though many queer males and females would have been horrified to be considered a “community” at all. Now there emerged a sense of belonging, and of real if unspoken common humanity.

The incidence of mortality among the sufferers of AIDS had abated, and new forms of treatment had become available to allay the worst symptoms of the condition. This amounted on occasion to complacency, as if the epidemic had never happened. The clubs and bars were more crowded than ever, and some previous activists lamented the fact that the once libertarian and radical aspects of queer liberation had been subsumed by a generally capitalist and consumerist culture. Many men and women felt excluded by queer liberation, alienated by the emphasis on youth, fashion and good looks. Perhaps it has always been thus.

The effects of Clause 28 were, as it turned out, minimal; its most important consequence lay in the self-definition of those who protested against it. As the London newspaper Capital Gay put it, “the visibility of our community has rarely, if ever, been greater.” In February 1994 the age of sexual consent for queer men was lowered to 18 and then, six years later, to 16. In that year, 2000, the ban on queers serving in the military was finally lifted. What had once been barred or banned was now accepted and welcomed. In the spirit of tolerance, same-sex civil partnerships and marriages are now condoned and even encouraged. Recent surveys have indicated that queer couples now seek the permanent union of marriage for the same reasons as their parents or grandparents; they are eager for love and commitment. They want ordinary lives based on loyalty and intimacy. This is a long way from the activism of Stonewall. There is now no question of estrangement from the larger society or of the reinvention of cultural and sexual identity.

So, gradually but inexorably, gay London has become part of the normal world and a corner of the Western playground of Europe. Bars have emerged on many street corners of central London with no ambiguity at all about the inclinations of their clients; they have large plate-glass windows rather than the closed doors and barred windows of the 20th century. Their customers spill onto the streets. Some areas of London, most notably Old Compton Street in Soho, have become gay zones. Gay newspapers, gay magazines and gay switchboards for multifarious purposes have sprung up, together with gay accountants, gay builders and gay undertakers. It would be no cause for wonder to find a gay fish-and-chip shop or a gay abattoir. 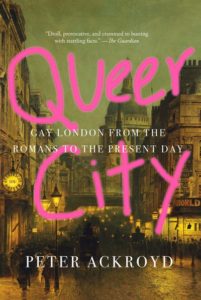 From Queer City: Gay London from the Romans to the Present Day. Used with permission of Abrams Books. Copyright © 2018 by Peter Ackroyd.

Peter Ackroyd is an award-winning historian, biographer, novelist, poet, and broadcaster. He is the author of the acclaimed nonfiction bestsellers London: The Biography, Thames, and London Under; biographies of figures including Charles Dickens, William Blake, and Alfred Hitchcock; and a multi-volume history of England His most recent book is Queer City. He has won the Whitbread Biography Award, the Guardian Fiction Prize, and the Somerset Maugham Award. He holds a CBE for services to literature and lives in London.

The Comics of Aline Kominsky-Crumb: Claiming Objectification as Desire

Some of the First Sketches of Winnie-the-Pooh 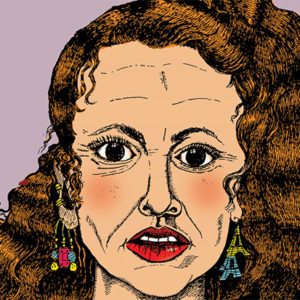 The Comics of Aline Kominsky-Crumb: Claiming Objectification as Desire

In 2013, when I was co-editing a special issue of Critical Inquiry, Aline Kominsky-Crumb sent me a brilliant two-page comics...
© LitHub
Back to top
Loading Comments...