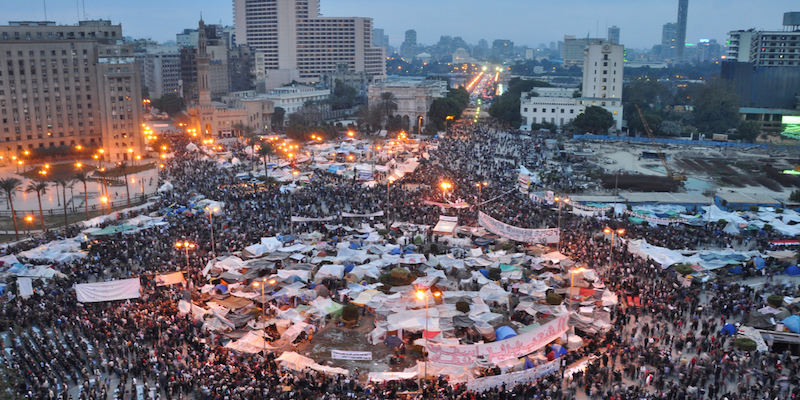 How Did the Arab Spring Change Fiction?

A wealthy Cairo suburb is experiencing a plague. Enormous corpse plants, installed to secure the perimeter of a luxurious villa, are being uprooted by the wind, flying through the air and crushing passing civilians. After the first deaths, activity around the mansion comes to a halt. The risk of being killed by an airborne plant that blooms once a decade and smells like the dead is simply too high.

That disorienting scenario in the Egyptian writer Mohamed Kheir’s novel Slipping is one of the more potent and unusual allegories for revolution to appear in modern literature. Those at society’s pinnacle invent outlandish, offensive mechanisms to protect their power: The oligarch in question, envisioning his wall of flowers, takes pleasure in the thought that pedestrians “would see the impossible things looming over them like something out of sci-fi.” Those mechanisms fascinate and repulse; egregious violations of the social contract, they draw the kind of questioning that threatens to conflagrate. Then, they take on an apparent life of their own to stamp out the threat, their cadaverous odor a reminder that it was always going to end this way.

A decade ago, Egypt’s Tahrir Square protests became a pivotal moment in the cascade of Middle Eastern rebellions that would come to be known as the Arab Spring. Now, Slipping (Two Lines Press), translated by Robin Moger and originally published in Arabic in 2019, is one of a set of Egyptian novels in recent English translation to engage with the question of if, and how, revolution changes the work of storytelling. Tied to both the 2011 revolution and, to a lesser extent, the 1952 military coup that reshaped Egyptian society, the works reflect the ways in which those upheavals affected the imaginative lens through which people relate to themselves and each other.

The change encompasses the world, but is also, in its own way, small—the difference between laughing at a piece of graffiti warning “Beware giant flowers,” and wondering if, instead, you should flinch. “Slipping,” which follows Seif, a young journalist exploring surreal corners of Egypt sometime after the Tahrir protests, is “a book about fractures and disjuncture, a view of the world whose integrity is compromised,” Moger said in an interview over Zoom.

That shift, from narratives of the revolution to stories about the psychological ramifications of those narratives, marks a natural evolution in the realm of Egyptian literature after Arab Spring.

The first wave of novels after the Tahrir protests, known in Egypt as the 25 January Revolution, was rooted in the violent brilliance of those days on the square; a prominent example, Mona Prince’s 2012 Revolution is My Name, recounts a single protestor’s experience through the 18 days between the revolution’s start and President Hosni Mubarak’s resignation. Fictions like Prince’s met the ferment of the moment, building on the ideas that fueled the revolution even as its participants reckoned with its brutal outcome. “In times of revolution, there’s a period that there’s more transparency,” said Ashraf El-Ashmawi, author of “The Lady of Zamalek” (Hoopoe Press), speaking through the book’s translator, Peter Daniel, in a Zoom interview.

But literary approaches to the revolution rapidly changed. The protests led, in quick succession, to military rule; the ascent to power of the Muslim Brotherhood under Mohamed Morsi; Morsi’s 2013 ouster by coup from the presidency; and the installation in power of the military leader Abdel Fattah el-Sisi, the strongman who retains control of the country today. The act of political novel-writing shifted, too, turning to grim pictures of revolution’s aftermath that tended toward the allegorical, especially as Sisi’s regime came to exercise increasing censorship over media.

That process is captured in The Lady of Zamalek, the least overtly revolutionary of the novels. Set in the confines of one toxic family as its members, over decades, perpetually attempt to outmaneuver one another, the narrative creates a sense of vicious hopelessness. In the family, as, it’s implied, the country around them, this cycle swallows all; even acts of extreme insurrection feed back into a negative cycle.

Ten years after the Arab Spring, Egyptian writers continue to navigate a perilous political landscape as Sisi’s regime, in addition to persecuting the press, has increasingly prosecuted those in more artistic fields. The Republic of False Truths by Alaa Al Aswany (Knopf), possibly the country’s most famous novelist, was first published in Lebanon in 2018 because, despite Aswany’s renown, Egyptian publishers understood the venture to be too risky. That calculus may have been borne out in 2019, when a lawsuit against Aswany, who now lives in the U.S., was filed in military court, charging that he had insulted “the president, the Armed Forces, and judicial institutions” in journalistic work for the German broadcaster Deutsche Welle.

The Republic of False Truths, translated by S.R. Fellowes, tracks the connected stories of a group of people with wildly disparate relationships to the 25 January Revolution, from a prominent general to a young teacher drawn to the action in the square. In that web, and particularly in the story of an engineer named Essam Shaalan, is a sense of the perpetual reframing that rebellions, particularly unfinished ones, can provoke.

Shaalan, a onetime revolutionary whose activism earned him ten years in prison, during which he was subjected to brutal torture, has become a low-level instrument of the state as manager of a cement factory. The 25 January Revolution sends him into a vertiginous reckoning with the harshly circumscribed worldview he adopted in shedding his radicalism. Consumed by fury “at the self-deception of the Egyptians,” he serves as an avatar for one cynically imagined outcome of the revolution: that rather than helping Egyptians overcome the boundaries between them, it could leave them more distanced from one another than before, driven mad by obsessive rehashings of why things went they did.

In highlighting that kind of internal narrative looping, Egypt’s new post-revolutionary literature is repeating the patterns of its past. Sonallah Ibrahim’s 2000 Warda (Yale University Press), translated by Hosam Aboul-Ela, follows Rushdy, an aging, disillusioned former leftist as, in the 1990s, he pursues the story of the titular Warda, whom he met in Cairo’s 1950s protest scene before she became a guerilla fighter in Oman’s rebel movement. Warda, Aboul-Ela said in a phone interview, is an “almost mythical figure” who struggles with the confused motives guiding the campaign to which she’s devoted her life. A true believer, she constantly tests her revolutionary peers: “She’s always trying to figure out whether they’re speaking sincerely or not.”

“If you think of the arc of the narrative as an almost purely idealistic commitment to positive change for social justice turning into something more reactionary than even what was there before,” Aboul-Ela said, “maybe that arc is seen even more clearly, now that history has repeated itself in that way.”

Slipping, The Lady of Zamalek, The Republic of False Truths, and Warda belong to discrete Egyptian literary traditions. But they’re joined together by the ways in which they outline a method of storytelling that mirrors Warda’s desperation to understand the incomprehensible multitudes of the individual lives that revolutions touch. When revolutions end, they suggest, the questions they invite about what it means to leave with others—every person with their own, inaccessible inner world—remain.

In Slipping, Seif, the young journalist, begins to see “People taking shape in others: friends in strangers, the dead in the living.” He pursues those who appear to be the reanimated dead, only to find they’re not who he thought. “But who knows,” he thinks, “maybe that other person was also dead, gazing out through the eyes of yet another.”

Talya Zax is the innovation editor of the Forward. 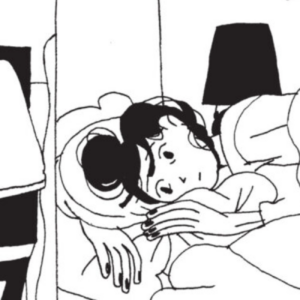 Mirion Malle (This Is How I Disappear, translated by Aleshia Jensen and Bronwyn Haslam) and Sophie Yanow (The Contradictions)...
© LitHub
Back to top