How Did Kansas Become Ground Zero For the Imminent Water Crisis?

Lucas Bessire on What’s Next for the High Plains

On the high plains of western Kansas, there is no clear line between water and second chances. Although I didn’t know it at the time, I was in search of both when I turned my Prius off a two-lane highway and onto the washboard gravel that led back to the farm.

After fifteen years, the land matched my memories of it. I recalled precisely the vault of space, the circled sky the most dominant feature and the sun a physical weight. Grids of stubble that rotate every half-mile, from corn to wheat to sorghum to corn. Each field a parable about boys who become men by learning to plow every inch, by knowing what not to know, by never leaving or by never coming back.

The road dead-ends at the breaks of the now dry Cimarron River, where the tablelands fall abruptly to a ribbon of shortgrass nestled in a river bend with sage sand hills rising to the south. Here stands the Little Rock House. Named after century-old concrete walls and corrals, it was once my great-grandfather’s cattle camp. It is where I spent most of my adolescent summers and it is where my father has returned to live out his years amid broken flints and buried bison bones.

He answered the metal door in his preferred retirement getup, a SpongeBob bathrobe and a silverbelly Stetson. At that moment, I realized the only thing I could say for certain was that he was born to this gusty land. Before, he liked to keep his distance. By then, he had little choice. And sometimes distance is as close to caring for each other as a father and a son can get. I stayed one night. Like always, I slept in the fixed-up barn, not the house. When the irrigation motor woke me up, I knew I’d been gone too long. The unmuffled Case engine sits a mile-and-a-cornfield from the Little Rock House .The big motor pumps 1,400 gallons of crystalline groundwater per minute nearly every day from early spring to late fall straight into the desiccating wind. Its steady drone was the backdrop to my childhood summers on the farm, as ordinary as the heat and flies and storms. But that first night back, its ceaseless rhythm was distracting.

Because it draws from the water sands under the former riverbed, this motor was one of the few wells in this corner of the Plains still pumping at full capacity. After eight decades of intensive irrigation, other wells in the county had dwindled. Many had gone dry. In 2014, the well at the Little Rock House hit bottom. My father redrilled and luckily hit water farther down. Since then he’d grown increasingly alarmed about the dropping water table. He asked around. Neighbors confirmed his suspicions. During my visit, my father told me about a nearly incredible scale of aquifer decline.

Most of the major aquifers in the world’s arid or semiarid zones are rapidly declining.

His stories lingered after I left. Over the following weeks, I checked out my father’s claims. The situation was worse than he suspected. I learned that southwest Kansas is a front line of the global water crisis. The planet’s supply of freshwater is unable to meet the demands that intensive agriculture places on it. It is predicted to only get worse. Pollution and population growth combine to make access to safe water an urgent concern for people across the world.

Groundwater, in particular, is under threat. Worldwide, billions rely on it as their primary source of water. More than half of the water used in agriculture is mined from underground. As industrial extraction grows and the planet warms, these strains on groundwater increase, especially in those dry regions that are becoming hotter and drier. At the same time, groundwater supplies are poorly monitored and managed. Oversight is often nonexistent. Far more groundwater is pumped than can be naturally replenished.

The result is that most of the major aquifers in the world’s arid or semiarid zones are rapidly declining. Groundwater extraction is draining aquifers across the globe, including those under the North China Plain, the Arabian peninsula, northern India, central Australia, California, parts of Chile, and many others. Most of this groundwater eventually makes its way to the sea. So much groundwater is pumped to the surface and drained into the oceans that it is now a major contributor to sea level rise, roughly on par with melting glaciers. Aquifers around the world are vanishing. Their disappearance often goes unnoticed or unmourned. Many will never return.

The Ogallala formation is part of the High Plains aquifer system underlying much of the Great Plains, including southwest Kansas. Nearly all of its waters are taken for irrigated agriculture.; They are pulled from deep layers of sandor gravel. Owing to this depth, such confined groundwater recharges very slowly or not at all. In most areas of southwest Kansas, this means groundwater is basically a nonrenewable resource. Depletion can permanently alter this kind of aquifer. Once the water is extracted, the spaces between the aquifer sands can collapse. Once the spaces collapse, suchsands cannot refill entirely in the future.

If groundwater loss is assured, what it means remains an open question.

Groundwater monitoring began near the Little Rock House in 1958. Since that time, test wells show the water table has dropped more than two hundred feet. A Hydrologists estimate that three-fourths of the groundwater in that area is already gone. That is, the Ogallala aquifer has some of the highest rates of groundwater loss in the world. The portions of the aquifer beneath southwest Kansas have some of the highest rates of loss in the Ogallala region. And groundwater losses near the Little Rock House are among the highest in southwest Kansas. All this meant that, by 2016, the place that nurtured five generations of my family was an epicenter of global aquifer depletion.

The paradox is that the loss of southwest Kansas groundwater is coupled with extreme dependence on it. There, aquifer water is the foundation of society. Pumping groundwater has made this semiarid region into one of the world’s most productive agricultural zones. The profits of agribusiness depend on subterranean flows. But so do property values, school budgets, job opportunities, and family ties. As experts debate the imminent end of the area’s aquifer, state laws allow farmers to continue mining the groundwater that remains. Further depletion is guaranteed.

If groundwater loss is assured, what it means remains an open question. Partisan divides shape how depletion is understood. The loss of groundwater cuts in opposite political directions at once. Some progressives seize decline as proof of rural voters’ ruinous shortsightedness. Conservatives invoke it as a rallying cry to protect a threatened farming way of life and to protest regulation. For many Plains residents, groundwater loss is just another pragmatic obstacle that requires grit and hard work to overcome. Regardless of political position, all agree that aquifer loss is a threat to ideal homelands. We do not agree on who can feel at home on the Plains or in the name of what.

The depletion of the High Plains aquifer is a defining drama of our times. Within it, planetary crises of ecologies, democracy, and interpretation are condensed. It demands a response. 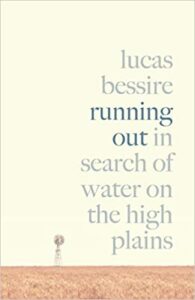 Excerpted from Running Out: In Search of Water on the High Plains © 2021 by Lucas Bessire. Reprinted by permission of Princeton University Press.

Lucas Bessire is associate professor of anthropology at the University of Oklahoma and the author of Behold the Black Caiman: A Chronicle of Ayoreo Life.

Sanaë Lemoine on the Reveal That Changed Her Life... and Inspired Her Novel 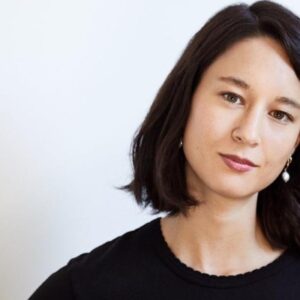 Sanaë Lemoine on the Reveal That Changed Her Life... and Inspired Her Novel