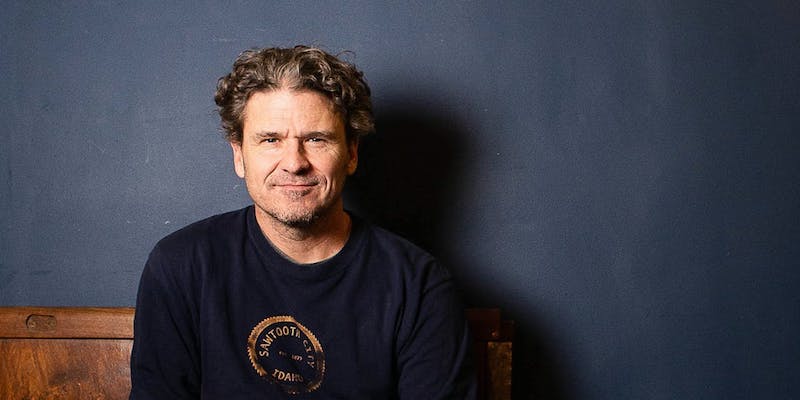 The Author Discusses His Upcoming Book, The Every

When Delaney Wells, protagonist of Dave Eggers’ new novel The Every, arrives for her first day of work at the eponymous company—a surveillance-focused tech corporation that is essentially a Google-Facebook mashup and more—she is treated to a litany of unsettling onboarding language: “‘You are invited to bring your most Joyful Self to campus each day.’ ‘Your personal Fulfillment is our goal.’ ‘You are Seen Here.’ ‘You are Valued here.’ … ‘Empathy is mandatory.’” At the Every, hyper-positivity is the norm, everything is transparent and therefore “fair,” and every single part of every single person is being tracked in real time.

The Every is a terrifying work of fiction, taking place in an almost-here future in which tech corporations tout their supposed ability to promote the common good in exchange for all of one’s personal information and purchasing power. Not only a satire of the tech industry, it also critiques the way that users of this technology look the other way, making everyday trade-offs of our privacy and independence for the sake of convenience. The result is constant surveillance, over-reliance on machines, and an algorithmic, numbers-driven approach to human interaction that is, well, creepy.

The Every builds on the world Eggers created for The Circle; the 2013 novel, which was adapted into a film starring Emma Watson and Tom Hanks, follows Mae Holland’s experience working for the Circle, a surveillance giant where employees are asked to surrender their private lives to the company. Eggers answered questions about the ways the digital world has changed since then, the strange empty language of tech, and how he decided to sell the book’s hardcover exclusively through independent bookstores.

Corinne Segal: The protagonist of The Every is Delaney Wells, a woman in her early thirties who goes to work at a tech behemoth with plans to bring it down from within. How did you arrive at this plot and with this hero?

Dave Eggers: The question Delaney poses is, “Is there any idea bad enough that it would cause users to say ‘enough’?” And the answer is, of course, no. She creates an app that tells you whether or not your friends are truthful and loyal. She expects humanity’s outrage at the depravity of the idea, but instead people love it; it provides the certainty they crave and feel they have a right to. She invents an app that tells you whether or not you enjoyed the food you just ate. People love that, too. There’s an app that rates your orgasms and compares them to those of your friends and neighbors. That, too, is wildly popular. She’s trying to push the company over a cliff, but keeps finding that there is absolutely no line—privacy, insanity—that will provoke anyone’s outrage. That’s sort of where the book began. It seemed like a fun place to start.

CS: The Circle (2013) gave us a portrait of a surveillance-oriented society, in which a tech giant is eroding all boundaries between the private and public self. How did the world, and your view of digital privacy, evolve between the writing of The Circle and The Every?

DE: The main thing I’ve been struck by between 2013 and now is how uncomfortable we’ve become with uncertainty, mystery, nuance, and subjectivity. And how data, algorithms, apps and the like offer often-false, usually numerical answers to all the unknowable parts of our lives. I have a gag in the book about college art students who refuse to be graded by their professors, given the subjectivity, fallibility and bias inherent; instead, they want an algorithm to determine whether their work has merit. It gave me a laugh, but I think in the real world this is coming. Machine judgments are seen as more objective, more accurate, and fairer. And every year, more of the decisions that rule our lives will be made by machines—because those that used to make these judgments don’t want the responsibility, and the judged don’t trust other humans to make these judgments.

CS: How do you approach building a setting that simultaneously takes place in digital space and in real space?

DE: I actually had to make a decision to make these characters far more social than they would be in a normal day. For most people who work in tech, 80 to ninety 90 of the day is on-screen, so dramatizing that is a challenge. I actually had to flip that ratio, and depict primarily the (relatively few) non-screen interactions Delaney has.

Machine judgments are seen as more objective, more accurate, and fairer. And every year, more of the decisions that rule our lives will be made by machines

CS: From the beginning of the book, an uncanny approach to language emerges; protagonist Delaney notes the Every employees’ use of hyper-positive words like “outstanding” and others that sound vaguely robotic (including “absorbability”). How do you, as an author, craft dialogue that is so influenced by artificiality? Where do you see evidence of it in the world around us?

DE: At least in the Bay Area, in any arena touched by the tech industry, there’s an almost fetishistic devotion to jargon that is both of those things—robotic and positive. Each year, there are a handful of words or ideas that come into vogue, and just about every aspect of life is seen through that new term. Disruption is one, and that’s had an incredible staying power, even after it’s ceased to have any real meaning. I also think of the word “scalability.” When that word came into popular usage, I heard it in every conceivable conversation, and the worthiness of any endeavor was judged against whether or not it was scalable. If you made a good taco, everyone wanted to know if it was scalable. So I tried to permeate the book with that kind of language, which is inherently comical because it’s like a bad disguise—like a linguistic fake nose.

CS: Did you research cybersecurity, surveillance, or other elements of the tech industry in order to write this book? If so, how?

DE: I have what probably sounds like a strange approach, which is that while I read some books about tech ethics—I love Cathy O’Neil’s book Weapons of Math Destruction, for example—I don’t read books about the workings of actual tech companies. I don’t want a novel like The Every to owe too much to the functioning of any one real-world corporation. I’m more interested in how the Every functions, and how it affects people, and what might happen next, more than I am curious about what actually goes on in, say, the Facebook cafeteria. There are great journalists always tracking these actual companies, so I leave that to them. My hope is to depict something a bit goofier and also more terrifying.

CS: The climate crisis is not, at least overtly, at the center of the plot, but there are references to it throughout, as well as references to technology-driven ways to cut carbon use (e.g. a virtual reality app that would replace the need to travel). How did you, as a writer, choose where to bring the climate crisis into the foreground of the book? Do you think tech companies are starting to position themselves as the answer to the climate crisis?

DE: When I was deep in the writing of this book, the sky in San Francisco was red and streetlights were on at 10 am; they had to be so we could see our way down the street. So it just felt natural to have climate change be embedded into the daily ethos of the Every. And like everything with tech companies, it’s a mixed bag. On the one hand, you have thousands of very smart people who can and do bring useful tools to the battle to save the planet.

Man, this all sounds depressing! I am depressing myself. But I promise the book is funny!

On the other hand, there’s a lot of high-minded nonsense that comes with it. At one point, an Every staffer suggests that the planet can be saved if everyone just stays still—meaning no travel, not even a work commutes. The Every loves this suggestion, of course, given its disruptiveness—and the fact that it will force people to be on screens more than before. In the book, saving the environment is really just another way the company consolidates power.

CS: One of the novel’s most striking (and familiar) conversations takes place between two characters: one arguing that the Every and its goals are destroying the human species, while the other counters that the Every is the only entity large enough to take actions to save the human species (like ensuring an “ethical supply chain”). What are some of your own reflections on this debate?

DE: These are the moral and ethical conundrums I’m most interested in. If one global behemoth could control the supply chain, wouldn’t they have a good shot at better directing and preserving resources, reducing waste, and eliminating environmentally unsustainable practices? I think it goes without saying a monopoly could do a better job than our patchwork system is currently doing. Imagine a kind of command economy designed and maintained by what Delaney calls a benevolent monopoly. The upside is we get global warming under control. The downside is that we’d all be subjects of an autocratic tech fiefdom.

CS: How do you think the pandemic has influenced the broader conversation around the ethics of technology and digital privacy?

DE: It accelerated a lot of trends. Hundreds of millions of people are finished with in-person work—that goes without saying. And we’re seeing a huge swath of the population that no longer knows how to deal with other people in person. Voluntary isolation will increase dramatically in the next ten years, with people eschewing all the risks associated with interacting with people in-person. So I tried to depict that in The Every—tech is driving people into their homes, given the ubiquitous surveillance in public, and the shame-industrial complex. So they stay inside, where they can be surveilled online. Man, this all sounds depressing! I am depressing myself. But I promise the book is funny!

CS: What was behind the decision to sell the hardcover exclusively at independent bookstores, and is that challenging to coordinate? (In other words, how can others replicate that decision?)

DE: It seemed like a good time to highlight independent bookstores, and the irreplaceable role they play in the health of a community. If we let one ecommerce monopoly take over all of bookselling, the writing and selling of books will change drastically. Monopolies are invariably bad for creativity, for art, for choice, for variety. Think of it like all the mammals in the animal kingdom. If we have thousands and thousands of animals, from llamas to red pandas to chinchillas, and one day we decide to only feed one hippo, pretty soon that’s all we’ll have—one gigantic hippo, with every other creature starved and gone. What we’re saying is, why not feed the rest of the animals, too? 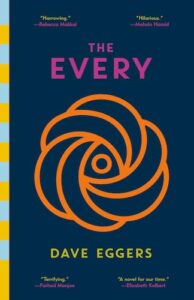 The Every by Dave Eggers will be available November 16 via McSweeney’s and Vintage Books.

On Ancient Aliens, Unidentified Aerial Phenomena, and the Unhinged Pleasures of Speculative Nonfiction 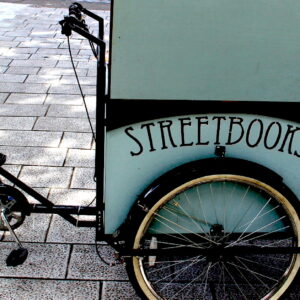 The Big Sky (Laura) The seed of the street library was probably planted before Portland, when I lived in Provo, Utah...
© LitHub
Back to top
Loading Comments...