For Your Consideration: "Gropecunt Lane"

Nigel Baker is a professional freelance archaeologist and sometime academic at the University of Birmingham in England’s Midlands. Today, he spends much of his time assessing historic buildings, organizing excavations, and leading archaeological tours of the River Severn in a canoe. But in the late 1980s, he spent a lot of time in the university’s staff bar. “Most staff went and had a proper lunch in the canteen-like facility on the top floor,” he told me, “but there was a regular subgroup who preferred a pint-and-a-sandwich type lunch.” Such a lunch was available in the bar, a “slightly seedy, 1970s peeling lime-green-decor, not-quite-approved-of-by-serious-scholars kind of joint.”

Baker had joined the university as a young research fellow to work on a project on English medieval towns and the church. Soon after he arrived he became friends with historian Richard Holt, who also liked the convivial atmosphere of the grimy bar. “Looking over Richard’s shoulder once at the file directory on his Amstrad computer,” Baker told me, “I saw he had a folder called Deathshit, which impressed me deeply.” The file collected information that would, Baker said, nowadays be described as “horrible history”—“stuff about plague, pollution, miserable accidents.” Baker and Holt were kindred spirits.

Over a pint, they began to talk about Baker’s hometown, Shrewsbury, a medieval town in the west of England rich in fifteenth- and sixteenth-century Tudor buildings. It has exactly the kind of cobbled streets and timber-framed houses that American tourists call quaint. (It is also the kind of storied place where it is possible to make a living as a freelance archaeologist.) Holt mentioned Grope Lane, in the center of the town, and Baker was astonished to learn for the first time that Grope Lane used to be Gropecunt Lane. He was even more surprised to find out that it wasn’t the only Gropecunt Lane in England.

Street names weren’t really in Baker’s field of interest. (“Really, I’m just a Gropecunt Lane dilettante,” he told me.) But he couldn’t stop thinking about the Gropecunt Lane project as he went about his day jobs and academic work. Soon, Baker and Holt were scouring old maps and atlases for other streets once named Gropecunt (or sometimes Gropekunt or Gropekunte) across the country. Eventually, they found more than a dozen.

Early street names were practical. In medieval England, names developed gradually, drawn from a nearby tree or river, the farm at the end of the road, the inn on the corner. Streets might be named for what happened there—Gropecunt Lane, for example—but also what you could find—the butcher, the blacksmith, the produce market. Other streets were helpfully named for where they led to—take the London Road to London, for example. Street names became official only after long use and the rise of street signs. Unsurprisingly, dull names like Church Street, Mill Lane, and Station Road are still among the most common street names in England.

And yet this haphazard approach also bequeathed us Britain’s most ear-pleasing names. Reading the streets of English towns and cities is a delightful exercise in time travel. In London, names like Honey Lane, Bread Street and Poultry conjure the food markets that once lived there. Fish Street Hill, where a thriving fish market once stood, was once called New Fish Market to avoid confusion with Old Fish Street, the site of another market. Pudding Lane, where the great Fire of London began in 1666, probably referred not to a sweet dessert, but to animal guts, or “offal pudding.”

Streets might be named for what happened there—like Gropecunt Lane—but also what you could find—the butcher, the blacksmith, the produce market.

Names could tell a visitor where to find an ironmonger (Frying Pan Alley) or a haberdasher (er, Haberdasher Street). Amen Corner, the story goes, is the point where the priests processing around St. Paul’s Cathedral would reach “Amen” in the Lord’s Prayer. Or names might point to medieval gallantry. Knightrider Street in central London is apparently where knights would cross on their way to jousts. Birdcage Walk housed the Royal Menagerie, and the king’s men practiced their archery and musketry on Artillery Lane. (If nothing of importance happened on that street, the street name could reflect nothingness, too—as in the Whip-Ma-Whop-Ma-Gate in York, meaning “Neither one thing nor the other.”) Seven Sisters Road, just a block and a half from my house, is now dotted with pawnshops, newsagents, and fried chicken joints. But if I squint, I can almost see the circle of seven elm trees, now gone, that gave the street its lovely name.

When Baker and Holt did the same kind of squinting, they discovered that the history of Gropecunt Lane disrupted prevailing ideas about how the medieval English dealt with prostitution. In theory, prostitution had to take place outside the city walls. In London, in 1310, prostitutes were formally banished to the outskirts of the city. But the Gropecunt Lanes challenged this version of England’s sexual history. To their surprise, Baker and Holt noticed that Gropecunt Lanes were hardly in the suburbs; in fact, they couldn’t have been more central, near the main markets. To put it Britishly, as English historian Derek Keene has, “In shops, perhaps, it was customary to agree, or to force, assignations which were consummated nearby.” The Gropecunt Lane name wasn’t just descriptive; it was also informative. The streets were often serving demands from outsiders— countrymen and farmers in market towns, sailors in port towns, and priests in episcopal towns. So their central locations made perfect sense. You don’t need a guide when you have a street name like Gropecunt.

The British often celebrate their rude street names, though understanding why they’re rude requires a schoolboy’s knowledge of slang. For a people considered demure, their vocabulary of filthy words is truly impressive. In 2016, the UK’s Office of Communications, a government agency that regulates offensive language on radio and television, published the results of a survey asking British people which words they considered the most offensive. The study only confirmed that British and American English are two different languages. I could hardly understand why many of the words were dirty at all, from the mild (“git”?) to the medium (what are “bint” and “munter,” and why are they about the same level of rudeness as “tits”?). But I could see why busloads of tourists detoured to take pictures in front of signs for Cracknuts Lane, St. Gregory’s Back Alley, Slutshole Road, and Cockshut Lane. An Oxford resident complained that he finds his street name most awkward when he is sitting with “official people,” and they ask, “you know, where do you live?” His answer? “Crotch Crescent.”

The British often celebrate their rude street names, though understanding why they’re rude requires a schoolboy’s knowledge of slang.

But unlike Gropecunt Lane, most of England’s rude street names are only accidentally raunchy. Rob Bailey and Ed Hurst’s book Rude Britain, a pirate’s chest of filthy place names, tells me that Butthole Road was named after a water butt and that Booty Lane is named either after bootmakers, Viking booty, or the Booty family. East Breast Street probably comes from the word for hill and Backside Lane is so called because it is at the rear of the village. Upperthong Street is on a narrow strip of lane. Little Bushey Lane is derived from the Old English for “enclosure near a thicket.” Cumloden Court is probably from Gaelic words meaning “the pool that retains water.” Ass House Lane? Your guess is as good as mine.

But boring names, so often duplicated, are far more confusing for a city government than ridiculous ones. London in 1800 was the world’s biggest city—ever. The City of London itself, bound by its old Roman walls, is actually only one square mile, but greater London had embraced the once-bucolic surrounding villages into its dirty and swirling mess. In just the 1840s alone, London added two hundred miles of streets to the city.

“Do all builders name streets after their wives, or in compliment to their sons and daughters?” the Spectator magazine asked its readers wearily in 1869, a few years later. “And are there 35 builders with wives named Mary, and 13 with daughters named Mary Ann spelt so? There are 7 places, roads, and streets called Emily, 4 Emma, 7 Ellen, 10 Eliza, 58 Elizabeth—23 of them being called Elizabeth Place,—13 Jane, 53 Ann and so on and on.” Add to that “64 Charles Streets, 37 Edward Streets, 47 James Streets, besides 27 James Places, 24 Frederick Places, and 36 Henry Streets.” Other streets were named “for nearly every fruit, and for every flower we have been able to think of in five minutes.” But the “climax of imbecility” was New Street—fifty-two of them in all.

Prudish Victorians cleaned up some of the less tasteful names; there are no more Gropecunt Lanes in England. There was, of course, some irony in providing respectable street names in a city where turds piled up on the riverbanks and the curtains of parliament were soaked in lime to disguise the stench. The satirical magazine Punch had enough of John, Peter, and Wellington Streets. “Let the streets be called by their proper names,” or, in other words, “the various nuisances or diseases which infest or pollute them respectively.” Their suggestions include: Open Sewer Street, Gully Hole Court, Slaughter House Buildings, Grave Yard Crescent, Typhus Terrace, Scarlatine Rents, Consumption Alley, and Scrofula Lane. Let us keep these street names, they wrote, “till this filthy capital shall have been properly drained and watered; shall have had its churchyards closed, its atmosphere disinfected, and plague and pestilence expelled from its habitations.” 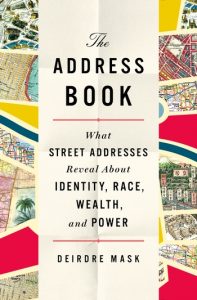 Deirdre Mask is the author of The Address Book: What Street Addresses Reveal About Identity, Race, Wealth, and Power. Deirdre's writing has appeared in The New York Times, The Atlantic, and The Guardian. Originally from North Carolina, she has taught at Harvard and the London School of Economics. She lives with her husband and daughters in London.

Rebecca Solnit: 'We Live in a World That is Not a Democracy of Voices' 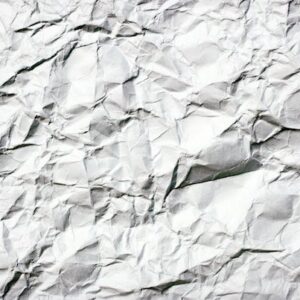 This first appeared in Lit Hub’s Craft of Writing newsletter—sign up here. In October of 2016, I finally managed...
© LitHub
Back to top
Loading Comments...