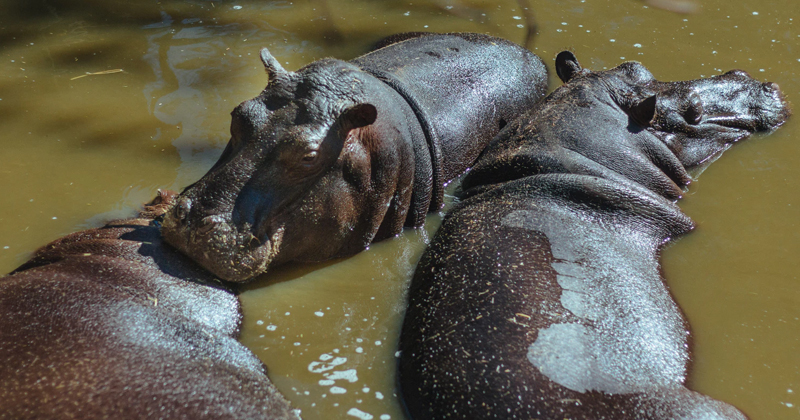 Nestled almost 5,000 feet up in the Andes, Colombia’s second city Medellin is surprisingly cool and damp for a spot so close to the equator. I was met by Carlos Valderrama, a handsome 30-something veterinarian who has come to know hippos rather intimately.

Our safari began with a four-hour drive through lush emerald hills, down into the Magdalena River Valley and deep into cowboy country. The trek gave Carlos plenty of time to fill me in on the backstory.

Back in 2007, the Colombian Ministry for the Environment began receiving calls from rural Antioquia reporting sightings of a very peculiar creature. “They said it was really big, with small ears and had a very large mouth,” Carlos said.

The locals were scared and so Carlos, a specialist in animal-human conflict, was sent in. He found himself faced with the task of explaining to bemused locals that this strange beast was an animal from Africa.

An equally confused Carlos wondered where the hippos had come from. The locals all told him the same thing: Hacienda Nápoles.

Situated halfway between Medellín and Colombia’s capital, Bogotá, and sprawling over nearly 75 hundred acres, Hacienda Nápoles was built by the infamous drug baron Pablo Escobar. It was from here that he controlled the export of 90 percent of America’s cocaine, a trade that made him one of the richest men in the world, estimated at one time by Forbes magazine to be worth more than $3 billion.

The ranch was his personal playground. Here he threw lavish parties, amassed his collection of vintage cars and built a dinosaur park for his son, complete with life-sized asbestos dinosaurs. Like many other megalomaniacs, Escobar also fancied having his very own menagerie. Legend has it that Escobar got his hands on a massive Russian cargo plane that he ordered flown to Africa and, like some modern-day, twisted Noah, filled with (sedated) illegal wildlife. The “Ark” then had to fly back to Colombia before the animals woke up, a task made significantly trickier when he discovered the runway at the hacienda, built for small private jets loaded with cocaine, wasn’t long enough. He ordered that it be rapidly extended to ensure the plane and its drowsy passengers could land.

Over the years, Escobar smuggled in lions, tigers, kangaroos and four hippos—three females and one very randy male he called El Viejo, a popular Colombian Mafia nickname meaning “Old Man.” The hippos were introduced into a small lake next to the hacienda’s mansion. And they’re still there. Although when I paid a visit to meet El Viejo, his harem was considerably bigger than three.

Escobar was shot by military police in the early 1990s. His empire fell and his entire menagerie was rehoused in zoos across South America—except for the hippos. Transporting an animal that weighs up to four and a half tons is an all too hefty challenge for even the most ardent wannabe hippo owner. So for the next two decades, the hippos wallowed in their pond as their master’s massive ranch was looted to the point of dereliction, and then transformed by the government into the unlikely combination of Pablo Escobar theme park (open to Escobar fans and complete with waterslides) and high-security prison (open to Escobar wannabes and without waterslides).

All the while, the hippos flourished. Carlos said their numbers were doubling every five years and there may now be more than 60 hippos. I only counted about 20 of them in El Viejo’s pond. The rest, Carlos told me, had busted through the flimsy barbed-wire fence that surrounded the hacienda and were running riot in rural Colombia.

Carlos believed that Colombians are more vulnerable to hippo attacks than Africans because they have grown accustomed to the image of hippos as cuddly animals, the star of Disney movies. “Everyone thinks they are cute animals because they look chubby,” he said. “But they’re not.” Carlos regarded Colombia’s hippo population as “a ticking time bomb.”

It was not just human safety that worried Carlos. Hippos have the power to radically reshape their environment, and the effect these eco-engineers might have on the local flora and fauna was what worried Carlos most.

“Legend has it that Escobar got his hands on a massive Russian cargo plane that he ordered flown to Africa and, like some modern-day, twisted Noah, filled with (sedated) illegal wildlife.”

In Africa, the hippos’ life is tough. They have to survive a severe dry season. Their pools dry up, food becomes scarce and they must protect their young from hungry crocodiles and hyenas. There are no such challenges for Escobar’s ex-menagerie. Steamy Colombia receives year-round rain. The hippos have all the grass they can eat, plenty of shallow pools to wallow in during the day, no predators and comparatively little competition from other hippos. Living the good life is changing their behavior. In Africa hippos usually become sexually active between the ages of seven and eleven, but Escobar’s hippos are breeding as young as three, and females are reported to be giving birth to a calf every year instead of every two years, as they do in Africa. As Carlos put it, the Magdalena valley is “a hippo paradise.”

The normal solution for dealing with an invasive species that’s running amok and threatening native species is to extinguish it, like those American beavers we met earlier that were bullying their European cousins to extinction. Governments around the world have gone to elaborate lengths to eradicate rats, ants, mussels and a host of other alien invaders. The government of Guam was praised for its ingenuity for parachuting a fleet of commando cats onto an island to eradicate unwelcome brown tree snakes. And the government of the Galápagos used so-called Judas goats (a reference to Christ’s betrayer) to lure invasive goats out into the open, where they were shot by snipers in helicopters. The US government has tried everything from itching powder to poison pellets in a futile attempt to annihilate starlings, which a New York pharmacist with a misplaced dream of introducing every bird mentioned by Shakespeare into America released into Central Park. Since 1890 his original 60 birds have swelled into a menace numbering in the tens of millions.

When the Colombian military shot their first rogue hippo, however, there was public outcry. The story reverberated through the international media. For a country eager to turn the page on its bloody past, shooting the star of Disney movies was a PR disaster. The eradication program was shelved.

Carlos was the man given the onerous task of implementing Plan B: a radical castration program. Neutering one of nature’s deadliest animals is a truly demented idea, but Carlos—clearly a man with serious cojones—gave it a shot. Thus far, the Colombian vet has managed to castrate one solitary male that was discovered terrorizing fishermen 155 miles downriver from the hacienda.

Carlos had been loaned an old Russian helicopter to airlift the neutered male back to Hacienda Nápoles. Napolitano, as the hippo was christened, now lives in the big pond. The enormous eunuch is apparently no longer a bother to El Viejo, making the lengthy ordeal an unlikely triumph.

Unfortunately, the operation cost the Colombian government over $150,000—a prohibitive price tag for a developing country with more than its fair share of money-draining problems. Carlos thought there was little chance they would do many more hippo castrations. It looked like the hippos are in Colombia to stay. If they carry on thriving in genetic isolation, they will, in time, become a new subspecies of Colombian hippo, perhaps with the name Hippopotamus amphibius escobarus—a most unexpected legacy of a billionaire drug lord as well as a fascinating glimpse into the kind of random event that causes one species to divide into two. 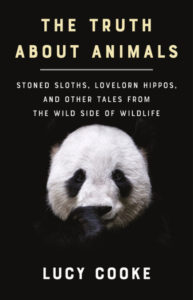 From The Truth About Animals. Used with permission of Basic Books. Copyright © 2018 by Lucy Cooke.

Lucy Cooke is an award-winning filmmaker who has written, produced, and directed several popular documentary series for the BBC, PBS, Discovery, and National Geographic. Her first book, A Little Book of Sloth, was a New York Times bestseller. She hold an MA in zoology from the University of Oxford. Her most recent book The Truth About Animals is now out from Basic Books. She lives in London.

What the Critics Are Saying About the New James Comey Book 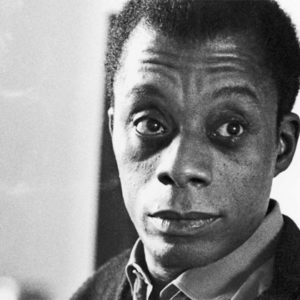 James Baldwin submitted an essay, “Freaks and the American Ideal of Manhood,” to Walter Lowe Jr., the first African American...
© LitHub
Back to top
Loading Comments...