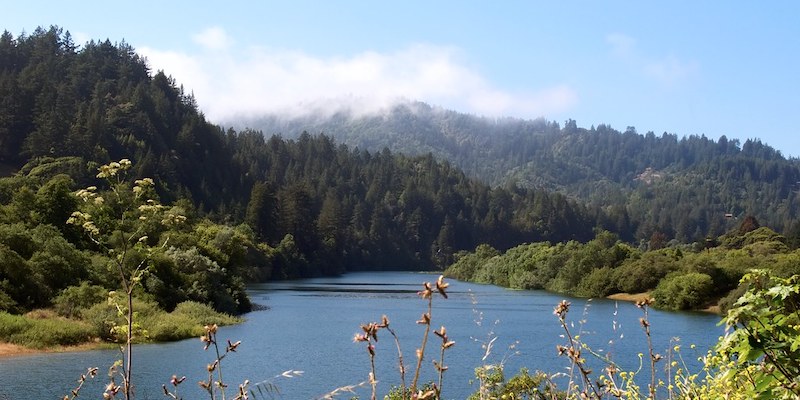 Remember a place along the river. Recall the season, the time of day, how the sun shone on the water, the trees’ shadows. Wohler Bridge. 1972. Midsummer. Midday. On a sandy beach where the river bends just before meeting the bridge. I am twenty years old, alone. Clear water ripples like beveled glass; small fish, no doubt carp, tease and dart at the shore. But what’s caught my attention is a single silver osprey, a bird I’ve noticed coursing the river countless times before, hovering now midair above me.

On weekends sunbathers, mostly young, carve out spots, a patch of sand, maybe under a shady willow, to drink beer and smoke weed. And, yes, to swim naked. They park in an empty lot below the bridge and hike north. But I knew of this place long before, when, as an even younger man, I accompanied Pomo basket maker and medicine woman Mabel McKay to pick herbs and cut willow branches for basket-making. I remember paper bags filled with mountain balm—for asthma, Mabel said—and I can still see the armfuls of straight willow branches tied with strips of colored cloth that we hauled back to her car, parked under a redwood near the bridge.

Mabel was a Lake County Pomo. It was her good friend Essie Parrish, a medicine woman like Mabel, who first told her of this place. Essie Parrish, like others of her generation from southern Pomo tribes, knew the Russian River well, its nooks and crannies, where to fish, where to gather herbs. “Medicine growing,” Mabel called the place, perhaps using Essie’s name for it.

The indigenous people did not think of the river as a 110-mile body of water as a geographer might. They didn’t conceive of it as a single unit or phenomenon but rather as a continuum of interconnected places, no different from the way they understand all features of the wider landscape, each with its own character and story. The storied landscape thus is a sacred text, an outcropping of rocks, a mountain peak, the river mouth, all mnemonic pegs reminding us not only of the world we find ourselves in but of how to live harmoniously with it.

My family traces its history to the river. As indigenous people in Sonoma and Mendocino Counties, we all do.

Except for the Coast Miwok, located south of the river, the indigenous nations of this area are Pomo. Both terms—Coast Miwok and Pomo—are linguistic classifications, but we belonged to at least a dozen distinct nations with distinct territories. Sometimes a nation’s people were identified by the name of the central village, as with the Peta x luma, which translates to sloping ridge, after a prominent feature of the landscape. The Kashaya Pomo called the part of the river near present-day Jenner Shabaiki, or south water place, and one Southern Pomo nation referred to a place near present-day Healdsburg as Ashokawa, east water place. Other locales were associated with fish and animals. Coho Salmon House. Grizzly Bear Path. Rattlesnake Coming Out.

Villages, indeed entire nations, were organized and located around bodies of water. Creeks. Lakes. The Santa Rosa lagoon. The Russian River. Each nation was responsible for the health of its water. Willows had to be cut back, lest falling branches clog the water, impede its flow. Sedge was maintained for the same reason. Since all bodies of water connect to one another throughout the territory of at least twelve distinct independent nations, each with between five hundred and two thousand individuals, the health of the water was also indicative of the well-being between nations. If nations in the foothills did not take care of their creeks, ensuring clean, free-flowing water for migrating fish to spawn, the nations located near river marshes forbade them to dig for the water potatoes that grew in the marshes. Likewise, if the marsh reeds and river trails were neglected, the hill nations wouldn’t trade for the herbs and flint for arrow-making that can be found only in the hills. Dozens of large creeks join the river, including the Maacama Creek east of Healdsburg, along which numerous indigenous villages were located. A healthy river meant peace.

In a clean river, fish were abundant. Steelhead. White Sturgeon the size of small whales. Spawning salmon so thick at the mouth of the river that a person could cross to the other side on their shiny black backs. Mostly people fished with nets. “Get your nets ready,” tribal leaders would call as the fish began to migrate upstream. There were abundant animals too, including beavers and sea otters not seen today or only rarely. Porpoises frolicked upriver as far inland as Guerneville. Seals always camped on the river shore near the ocean, competing with people and grizzly bears for fish, especially salmon.

Oh, and there are so many stories . . . Near Jenner a young Pomo was leeching acorns in the sand. Busy talking to another woman also leeching acorns, she lost track of her young son, who’d found his way upriver, not too far from his mother but out of her sight. This was on the north side of the river, where today cattle graze on green grass that meets the water.

When she found the boy near the river, she was startled to see a huge white sturgeon head sticking up out of the water, appearing ready to swallow the boy on the shore. Luckily, she reached him in time. But then, not long after she got home (she left her acorn meal in the sand), her son fell into a coma. When the medicine man came in from work (the villagers were living on a ranch, tending sheep and cattle for a white man), he prayed over the boy.

“What did you see?” the medicine man asked the boy when he woke.

“An old man in the river,” the boy answered. “He told me he was lonely for his people. There weren’t many left.”

“Yes,” the medicine man said. He turned to the boy’s mother. “He didn’t want to eat your son. He was telling him that he can’t forget his people. What happened to the fish can happen to us too.”

My family traces its history to the river. As indigenous people in Sonoma and Mendocino Counties, we all do. My great-great-great-grandmother, Tsupu (baptized Maria Checca), was born near Peta x luma, sloping ridge. Her father was born in a village on Mark West Creek, which joins the Russian River north of Forestville. Her son, who was Tom Smith, would later build his ceremonial roundhouse on the Jenner Head. There he preached about the importance of remembering our traditions, the rules of living with the land. Pointing to the river, he said, “Like that water, we are connected to everything. It’s memory.” His granddaughter, my grandmother, sat below the redwoods at Wohler Bridge watching cockfights with her friends and relatives.

Filipino farmworkers, the manongs, hosted the fights. A large bonfire was built. They wore their best clothes—pinstriped suits, gold chains, Panama hats—never mind the spurting blood, mostly to impress the single Indian girls gathered for the fight. My grandmother said the bonfires were so big you could see the illuminated tops of the tall trees from across the river. An anti-miscegenation law forbade Filipino men marriage licenses in California at the time, and American Indians were some of the only women available to these young bachelors brought from the Philippines to work on farms and in kitchens. Today, there is a significant amount of Filipino ancestry in the tribes. My grandmother, for instance, married my Filipino grandfather in 1929 (in Tijuana, so she could have a marriage license), and although they lived in Los Angeles, she returned with him to the Russian River area to visit family and friends, and one of the best places to find them was at the Wohler Bridge cockfights, located, coincidentally, where I parked my car before heading up the river to swim. In 1972, I didn’t know about the cockfights. I would learn about them from my grandfather and other manongs.

My grandmother, who I didn’t know, comes alive in a story. I see her by the bonfire, roosters at each other midair, just as I see, from another story, a small Indian boy and, hardly a foot away, the face of a fish large as a whale. I see salmon plentiful enough that I can walk across them like a bridge. I see sea otters wrestling on a muddy shore, and beaver dams the size of houses atop the water. I see clean water . . . And me now. 1972. Wohler Bridge. A warm summer day. I start to peel off my clothes to swim. But then I stop, looking back up at the magnificent silver bird still hovering above me. “I know the river,” the bird says. “Follow me,” and already I’m in the sky able to see below me the length of the river and a hundred places I can land. 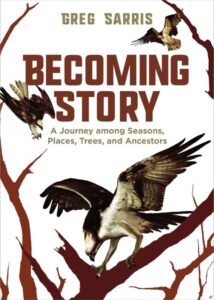 Greg Sarris is an award-winning author and tribal leader serving his fifteenth consecutive term as Chairman of the Federated Indians of Graton Rancheria. He received his Ph.D. in Modern Thought and Literature from Stanford University and has taught as a professor of Creative Writing and American and American Indian Literatures. His books include Becoming Story, How a Mountain Was Made, and Grand Avenue, which was adapted into an HBO miniseries. Visit his website at greg-sarris.com. 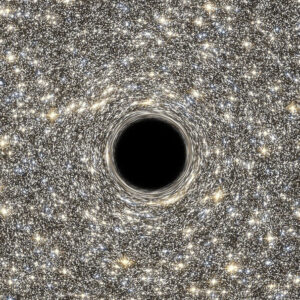 Happy Black Futures Month! To talk about Blackness (Blackness, African-Americanness, Afrikanness, my people) is always to invite...
© LitHub
Back to top
Loading Comments...