In this episode of Just the Right Book with Roxanne Coady, Beck Dorey Stein joins Roxanne Coady to discuss her book, From the Corner of the Oval, out now from Spiegel & Grau.

On her intentions for the book:

Beck Dorey-Stein: I didn’t want the book to be one more typical White House memoir where I was really important and I was the last person in the room. I was not important and I was the first one kicked out every time. However, I thought it was important coming from this background and growing up that I loved writing … and there were all these ways that I thought I would end up being a writer. Becoming a stenographer I knew that I would never get to write, but it doesn’t really matter as long as you do it with your own free time.

On the Trump transition:

Roxanne Coady: You worked with Obama, but what happened when Trump came in?

Dorey-Stein: Trump was elected November 2016. I know I am the only one, but I thought Hilary was going to work. A bunch of my friends were coming back to work at the White House. I was so excited that I was going to see the first female President. I’ll get to write stories about that. Two of my best friends were working on her campaign, and they were working back and it’ll be so much fun.

Then, she didn’t win. I have to get out of it. All of my friends were being escorted out. I thought that maybe I should stay to see what the transition is like, but I knew I wouldn’t last long. Inauguration Day was heartbreaking for a lot of people. All my friends went to the tarmac to say goodbye to President Obama as he took off for his final flight. I had to stay and type the transcript for Trump’s inaugural speech. It couldn’t have been a more steep change of the guard. I was typing through tears, not believing this was the new reality.

I had to get in the gates through protestors the next day. It was just like, this was not going to work.

A graduate of Wesleyan University, Beck Dorey-Stein worked as a White House stenographer from 2012 to 2017. Previously she worked as a high school English teacher in Hightstown, New Jersey, Washington, DC, and Seoul, South Korea. This is her first book.

The Renegade Ideas Behind the Rise of American Pragmatism 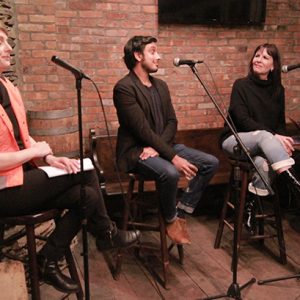