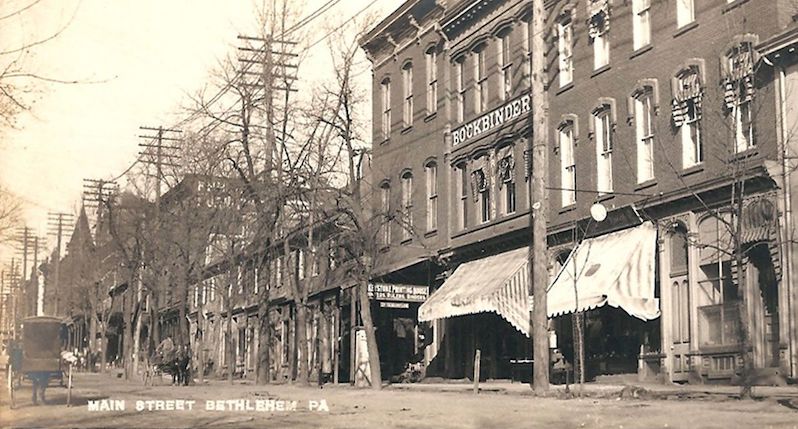 Andrew Belonsky on the Moravian Book Shop in Pennsylvania

The tale of the Moravian Book Shop isn’t straight-forward. Founded in 1745, in Bethlehem, Pennsylvania, it’s said to be the oldest continuously-running bookstore in America, yet it’s largely under the radar. It’s not a grande dame to whom homage must be paid; it’s never been the epicenter for new literary movements; nor was it a champion for free speech under British rule. Instead, the Moravian Book Shop, established by the Moravian Church and today managed by Barnes and Noble, exists in a nexus of past and present, public and private, communal and corporate. In this way, it defies definition — a nebulosity that speaks volumes about bookstores themselves.

The business currently called the Moravian Book Shop always played an amorphous role in its community. It was part of a larger economic engine: a communal economy created by Moravian Church missionaries who came from Germany to Bethlehem, PA, in 1741. They envisioned creating utopia from which they would spread their spiritual message, and each professional, from cobbler to blacksmith to mason, subsidized the church’s missionary work. As historian Katherine Carté Engel writes, “From the perspective of the Moravian community, the profits from their businesses had a clear religious purpose that justified financially astute and profit-maximizing behavior as long as Moravian businessmen carried it out in proper Christian spirit.”

Once an after-thought in a church-run town, the bookstore had become a secular safe haven.

The book shop was a part of this larger engine, but a piece that itself had many moving parts. Opened in 1745 at Bishop Augustus Spangenber’s insistence, and manned by Samuel Powell, an inn keeper, not a book seller, the shop’s main intent was to import international tomes and peddle the church’s religious texts. Known for being practical, though, the Moravians made the outpost more than that: the Bethelhemer Bücher Shop also sold stationery, cloth, and other supplies typical of a general store—anything deemed essential for the burgeoning community and its neighbors, anything to make money and build community.

Bethlehem’s collective efforts paid off. Engel notes, “Residents began to do considerable business selling their wares and services to their neighbors—the German-speaking, English speaking, and Indian residents of northeastern Pennsylvania.” And their inclusive industriousness attitude impressed the other colonists. Benjamin Franklin wrote in his autobiography, “While at Bethlehem, I inquir’d a little into the practice of the Moravians: some of them had accompanied me, and all were very kind to me. I found they work’d for a common stock, ate at common tables, and slept in common dormitories, great numbers together,” and fellow founding father Benjamin Rush noted in 1789, “The inhabitants [of Bethlehem] possess a gentleness in their manners, which is peculiarly agreeable to strangers. They inure their children, of five and six years old, to habits of early industry.”

Neither writer, however, mentions bookstore, an omission that indicates a hazy role for the Bücher Shop. It clearly didn’t stick out for its book stock, which at that point consisted mostly of religious texts: hymnals, daily readings, bibles, sermons, devotionals, and the like, but some science and medical tomes, too, which shows the religion wasn’t afraid of new-fangled ideas, even if they flew in the face of their faith.

In 1760, the church, and by extension the store, transitioned from a communal economy into one more aligned with the capitalist colonies. They had no choice: institutional debts were piling up and they feared being ostracized from the broader economy. Paul Peucker, director of the Moravian archives, notes, “…The Moravian Church reinvented itself as a noncontroversial Protestant denomination by abandoning everything reminiscent of radical religion.” He goes on, “There was a deliberate attempt to remove anything associated with radical religion. This was the only way, Moravian leaders after 1760 believed, that the church was able to gain support for the various governments under whom they were established…”

Still, the Moravians maintained their colonial era autonomy in other ways. For example, non-Moravian “strangers” were verboten from spending the night in Bethlehem’s center. Instead they were lodged at inns on the town’s edge. It wasn’t until 1845 that non-Moravians were allowed to own land in Bethlehem. The community was part of the larger nation, yet apart, as well—for example, they remained neutral during the Revolution—which also adds to the book store’s low profile then and now.

Insular as Bethlehem was, the store kept up with the times. In 1822, as newspapers spread across the still-new nation, the book shop began printing in-house, debuting the church-aligned quarterly Missionary Intelligencer, which became the monthly Miscellany in 1850, and then, a sign that readership was wide and demand deep, a weekly called The Moravian in 1856. That same year the store moved from sleepy Bethlehem to bustling Philadelphia, where in addition to selling books and printing newspapers, it continued creating advertisements for businesses Moravian and non-Moravian alike. Business appeared to be booming. It wasn’t.

A May 1858 letter shared by Moravian Archives illustrates the store’s struggles in the mid-to-late-19th-century. In it, book seller George Perkin discusses the store’s monetary challenges: “I tried to economize as much as possible, buying goods very low and selling them with profit. But during the last year, although we have done our best to economize, our expenses have been much greater.” These expenses included pricey imports, an overstock of text books and exorbitant in-house printing costs. And Perkin also indicates internal debate over the book store’s very existence: “The question may arise in the Synod whether the bookstore has been of any advantage to the church. I think it has been… It has proved a convenient place to send donations to… It has been a means of diffusing information concerning our church and its operations, and often enlisting sympathy in their operations. It has proved of advantage in many business respects to our ministers and missionaries in visiting the city.” The love of secular literature still wasn’t a large part of the store’s story. The book shop’s role remained closer to church organ than cultural vanguard.

To economize, the store was moved back to Bethlehem, but by December of 1859 it was in search of new management. As Edmund Alexander de Schweinitz, a teacher and church bigwig, wrote, the managers were losing too much money to go on. As a remedy, Schweinitz suggests stocking the Moravian books with “some member of my church who has a store—not a bookstore, but a store of another kind [emphasis his.]” He goes on, “I am not sure I would be able to find a member willing to undertake the hardship, but I would try.”

The store survived, barely, and underwent a few more changes in the immediate years ahead. In 1867, the Synod merged printing, binding and bookselling under one roof. Then, in 1868, they moved to a new location, an old YMCA, before moving again, in 1871, to the shop’s current location, on Main Street. The space continued selling religious books and printing religious papers, as it always had, but even at 144 years old, the store’s self-identity remained fluid: while the space reportedly took its current name, the Moravian Book Shop, in 1905, a 1920 Textbook of the Moravian Church, lists its publisher as the Moravian Book Store, Bethlehem, PA.

Whatever the entity’s name, the store evolved as the 20th century opened and unfurled. Records from that era are spotty, and many are in German and/or aren’t currently undigitized, but it was around this period that more mainstream fiction was added alongside religious texts. The addition of unique decorative Moravian Christmas Stars brought in new business, and the church made further changes by transferring ownership to the Ministers’ Pension Fund of the Northern Province of the Moravian Church in the mid-1900s, a way of limiting expense to the church’s main account. The space underwent its first expansion in 1970 and four more followed, until the shop took up 15,000 sq ft, most of it filled with fiction books.

By the late 20th century, the Moravian Book Shop, facing competition from stalwarts like Barnes and Noble and then-burgeoning Amazon, expanded its offerings to include CDs, a garden shop, and a café; later, in the 21st century, a dog treat bakery was invited in—just one of many ways it struggled to boost business and stay competitive. The store was intent on staying put by any means necessary. As the store’s book buyer told The Guardian in 2016, “You have to get creative [to survive], and I think that’s been evident over the years… We’ve created something here. What you hear people say is we’re an experience.” Once an after-thought in a church-run town, the bookstore had become a secular safe haven.

“You have to get creative to survive, and I think that’s been evident over the years. We’ve created something here. What you hear people say is we’re an experience.”

Alas, the steadfast headwinds of book selling continued to blow. In late 2017, the Pension Fund faced the facts: It could no longer afford the burden of running a book shop. It sold its control the church-affiliated Moravian College, which in turn transferred day-to-day management duties over the Barnes and Noble. Over 6,000 people signed a petition to stop the deal, proof that a once an after-thought in a church-led town, the bookstore had become a secular safe haven. But it was too late: the store’s today under B&N management.

To book lovers, the Moravian Book Shop’s shift from independent bookstore to a tiny cog in a larger corporate monolith may be a demoralizing lesson in the struggles literary lovers and purveyors have always faced. To historians and anthropologists, the trajectory from church-run business to corporate-owned entity may get to the heart about the balance of power and economics in America. But detached from emotional and cultural context, the Moravian Book Shop’s transformation over the centuries stands in for the larger story of bookstores in general: these stubborn entities adapt to survive in a culture that doesn’t always appreciate them, they transition for changing times; they fight to share their cultures and ideas in their own ways, no matter what the outside world thinks.

So, no, the Moravian Book Shop isn’t a grande dame or infamous; it’s not ground zero for literary awareness in America, nor is it a historical change maker. It’s more like an old oak, standing strong and growing, storms be damned.

Author’s Note: A very special thank you to Thomas McCullough, Assistant Archivist of the Moravian Church, Northern Province, for all the digging, digitizing, and details.

Andrew Belonsky has contributed to The New York Times, The Guardian, Rolling Stone, Jezebel, The Daily Beast and Out magazine. He lives in Atlanta, Georgia.

Sugar and Sex in the American Imagination

For Gothic Heroines, Haunted Houses Are Always Too Big 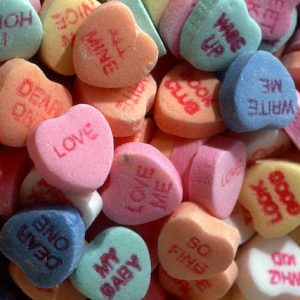 Sugar and Sex in the American Imagination

“Sweet, cute and with a good attitude.” “I found her to be a very competent individual. I liked her as a person....
© LitHub
Back to top