Anandi Mishra on Anxious People in Times of Crisis

In December, as COVID-19 cases again rose to unprecedented numbers, Delhi shifted gears and instated weekend curfews. At home, arrested by a now-familiar sense of ennui, I escaped to present day Sweden. Over the course of a weekend, I watched the six-part series Anxious People, Netflix’s Swedish whodunit based on Fredrik Backman’s 2019 novel of the same name. The series erased my sense of place, instantly lifting me out of Delhi and transporting me into the snowy city of Södertälje. In its huddle of fretful characters, worried about an entirely different set of issues than my own, I found strange company.

The story follows a father-son police duo, Jim and Jack (Dan Ekborg and Alfred Svensson), as they try to track down the culprits behind two incidents: the first an attempted bank robbery, the second a hostage situation during an open house in an apartment building. Jim and Jack interrogate the eight hostages, trying to zero in on the suspect, but thrumming beneath the surface is a strangeness on the victims’ part, who are clearly trying to hide something.

The investigation serves a twofold purpose: we learn how the hostage situation has affected the characters, while also getting an invaluable peek into each of their private lives—including Jim and Jack, who are at odds over the reappearance of Jack’s sister, a habitual drug user who now claims to be sober. It soon becomes clear that the show’s rather straightforward title wraps multiple mysteries within itself: the characters are not merely anxious about being held hostage, but also due to the multiple problems in their own lives. What unravels then is a sensitive, sometimes funny, unspooling as tempers run high and the truth is finally revealed.

Watching Anxious People reminded me of the early pandemic days in Delhi: the uncertainty around the virus, my fears that this is how the world would come to an end. On calls with my then best friend, I ranted about the strangeness of the time and how it resembled themes of Hollywood movies we’d grown up watching in the 90s and early aughts: Independence Day, War of the Worlds, The Day the Earth Stood Still. Anxious People lays bare how at the first strike of panic, we tend to spiral out—but with time, we gather ourselves, threading details together to find a semblance of normalcy, even in a deeply panic-ridden state.

A mix of panic, mystery, comedy, and love, Anxious People shows us that compassion, even in the most bizarre of situations, saves the day.

Of course, that’s just another way of describing humanity, which is the animating spirit of the series. The mystery, oddly brimming with humor, made me laugh nervously while also keeping me on edge. Watching it reminded me of plowing through TV adaptations of Agatha Christie novels—it opens similarly, full of tension, but by the end of the second episode I knew it was going to be different, more humane, more rooted in our present times, concerned with vulnerable people existing at the fringes of the society.

After two years of the pandemic, battling inert, everyday battles like the characters of Anxious People, the series offered me a strange new reprieve. I was not alone; this was not even a once-in-a-lifetime situation. It was comforting to watch others, however fictional, grapple with a different crisis, one that was also unprecedented, unforeseen, and entirely out of their control. Throughout the six episodes, we see the characters grow closer—under threat, in sorrow, and in love—revealing that the show’s real interest is in exploring human relationships.

A mix of panic, mystery, comedy, and love, Anxious People shows us that compassion, even in the most bizarre of situations, saves the day. Its lessons are akin to my experience of the second wave in India, during April and May of 2021, when I saw a moving, humane story of people caring for one another, and took comfort that although most of us were in an emotional and medical wallop, ordinary people are capable of extraordinary generosity.

The show also served as a reminder of how the COVID-19 pandemic will never be the last of our worries. There will always be a different kind of worry waiting for us at the curbside, at the doorstep, on the corner. We can only get used to this fact of life and enjoy our times the best we can. We are—we never were—alone in our suffering.

Anandi Mishra is an essayist and critic, who has worked as a reporter for The Times of India and The Hindu. One of her essays has been translated to Italian and published in the Internazionale magazine. Her essays and reviews have appeared in the Los Angeles Review of Books, Virginia Quarterly Review, Popula, The Brooklyn Rail and Al Jazeera, among others. She tweets at @anandi010. 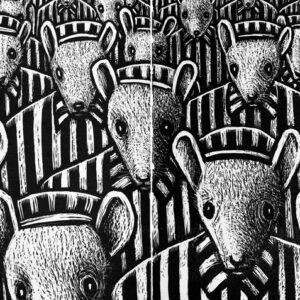 My friend, a poet and professor, was telling her nine-year-old daughter last week about the banning of Maus. She explained...
© LitHub
Back to top