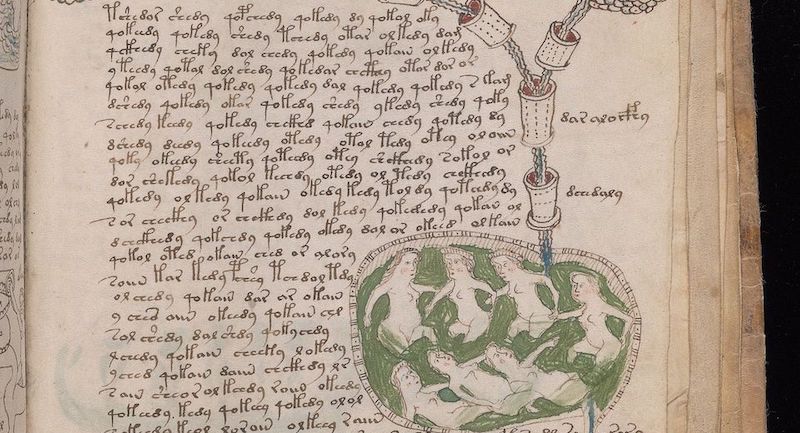 Natalka Burian on the Allure of the Voynich Manuscript

The segment was short but intriguing, detailing the limited facts about a mysterious document that no one had been able to understand despite centuries of study. The Voynich Manuscript is a centuries-old, illuminated, 240-page book featuring illustrations of plants that don’t exist on earth. There are some wild celestial drawings in there, as well as depictions of possibly pregnant women conducting strange rituals in pools of green liquid. There’s even a recipe section. Most mysterious of all, however, is the language in which the book was written. No one can agree whether it is some kind of encrypted work, an elaborate prank, a vanished language, or something more.

I am a person who loves research. If it made any fiscal sense, I would have remained enrolled in graduate school for the rest of my life. After I found out about the manuscript I felt like I wanted to study it—and, as a person with an infant and a toddler, I was starved for a project like this. The promise of piles of index cards and visits to the library could not have seemed like more of a dream to me amid the chaos of caring for two small children. When I finally got to work, my mind crackled back to life with the excitement of discovery.

I explored every credible source of information about the document, and even investigated a visit to Yale’s Beinecke Rare Book Library, where the Voynich Manuscript now resides. When I reached out to the library to inquire about the volume, I received their exhausted canned reply: “Though the Beinecke Library owns the manuscript, we do not systematically compile or publish research about it. You might want to present your findings to one of the communities that follows the manuscript” along with a Reddit link. I quickly realized that I was no different than the amateur sleuths who clog up the phonelines and in-boxes of the staff at the Beinecke. And while I feel for these poor librarians, I also empathize with every single wild-eyed Voynich enthusiast out there looking to uncover that elusive Something More.

The origins of the manuscript are murky, with evidence to suggest the 15th-century acquisition by Emperor Rudolf II of Bohemia, an occultist and collector of oddities. The text is referenced in the 16th century correspondence between a doctor in Prague, and a Jesuit Priest in Rome. And, since the vellum has been carbon dated to a period between 1404 and 1438, we can be assured of its antiquity as well as its strangeness. Wilfrid Voynich, an antique bookseller, purchased it in Italy in 1912 in a Jesuit estate sale. Voynich was obsessed with solving the document’s mysteries for the rest of his life.

The Voynich Manuscript embodies a period where science and magic were not separate, but depended upon one another.

Over the years, historians, linguists, and even WWII codebreakers have tried to translate the strange script, with theories ranging from Ukrainian without the vowels to pure nonsense. However, modern methods have discredited every theory generated so far. The Voynich Manuscript has been completely digitized and is now widely available for amateur and professional scholars alike to study. The conclusions of these studies continue to be unresolved, but the most compelling semi-conclusion is that it is probably not a hoax. The text is most likely a natural language because the alphabet appears to contain 20-30 characters, because some of the characters are present in every word, because some of the characters are doubled, and because the manuscript contains evidence of suffixes, prefixes, and roots. Handwriting experts have also confirmed that the document was written by two different people, and with a confident flowing script—all indications of the transcription of an existing language.

As I compiled my notes, and organized my index cards, I felt an old part of my brain re-animate, not unlike another famous character from a story where magic and science meet. I know how strange this sounds, but I felt an almost unreal intellectual unfurling; the urgency was so intense it was almost ugly. It was also amazing. Until the great, inevitable deflation of arriving at the end of the factual road. As any research enthusiast will tell you, there is always more to look into. If you’ve spent a single afternoon on Wikipedia, then you know what I mean. Wormholes of relevance open up, and before you can think twice, you are swallowed down into another, different fascinating world.

But with the Voynich Manuscript, it became evident that the facts were limited. I experienced an outsized mourning when this happened, not so much lamenting the lack of data or the mystery of the Manuscript, but mourning the feeling I’d experienced for the first time in a long time—looking out over that Grand Canyon sized space of possibility and discovery. It was strange to come up against this wall where the facts ended before my index cards ran out.

For several days, I moped. I was unsure about what I had really wanted out of this folly, other than to prove to myself that my brain still worked. But, while I moped, I kept thinking about that bizarre, beautiful language that existed only in the pages of a single book. I couldn’t stop thinking about the circumstances that could have produced such a document. The most fascinating part for me, aside from the uncrackable code and eternal mystery of its origins, is that the Voynich Manuscript embodies a period where science and magic were not separate, but depended upon one another. I kept wondering what that would look like now, in our world. If there was no modern, natural explanation for the manuscript, was there a supernatural one? What if the plants that blossomed throughout the text had come from a world farther away than we could ever go? There was definitely a magical leap to be taken, but what would it look like to make that leap?

At this point, there were two, distinct paths forward; I could become either an Ancient Astronaut Theorist, or I could become a novelist. I let myself imagine where a story with a manuscript like this could begin, where a story with these alien plants and recipes could lead. As I bathed my children and replied to emails, I found myself orbiting the idea of a book written in code with illustrations featuring plants not found on earth. But I was not like any of the tenacious and serious fiction writers I had met in my many years of living and working in hospitality in New York City. It took me an embarrassingly long time to get my head around the idea that I could write the story that was slowly coming into focus in my mind. This wasn’t the kind of writing that I normally did. Even if I could experiment with writing fiction, starting a novel seemed impossible. The idea of finishing a novel seemed insurmountably prohibitive.

Becoming a mother made me feel erased in so many ways, but bringing this book to life helped me to reverse a lot of those feelings.

I was doubly certain that I couldn’t be a “real writer” because I had, almost obscenely closely, studied the work of “real writers” and it felt presumptuous and foolish to assume that I could ever achieve what these others had. But I didn’t stop thinking about the mysterious language winding across the 600 year old pages of the book. I thought about it constantly, at all hours of the day. If you’ve ever cared for two small children at once, you know how comprehensive that particular brand of sleep deprivation becomes. Its effects border almost on the psychedelic.

As I woke for feedings and diaper changes in the night, the characters that had begun to emerge as I clicked through images of the text became more persistent in their desires and fears. Exhaustion, as much as the Voynich Manuscript, finally broke an opening into a vision of what was possible. Instead of staring out at that canyon of research and things to be learned, I found myself staring into a space of invention. When people ask me about my way in to my novel, Daughters of the Wild, I always give credit to the Voynich Manuscript first, and the character I envisioned who creates her own document very much like the mysterious text.

The action in this book is not limited to the creation of this mysterious manuscript; Joanie, the protagonist, must study and decipher it. The intrigue is not only in the making, but in the translation, too. The magic act occurs in making the unknown, known; the magic is in the unlocking.

As I wrote Daughters of the Wild, I unlocked something, too. Making space for my mind to move in a new way as I adjusted to life as a parent was a real revelation. It was also incredibly reassuring, to understand firsthand that we can grow older and still be capable of other kinds of growth. Becoming a mother made me feel erased in so many ways, but bringing this book to life helped me to reverse a lot of those feelings. I dispelled that erasure by making something out of thin air, by building something only with the contents of my mind. It was a kind of mystical experience, almost as mystical—and scientific—as giving birth to my children. I keep coming back to Rudolf II’s obsession with magic and science, and wonder if that isn’t exactly the phenomenon I experienced when I wrote this book. 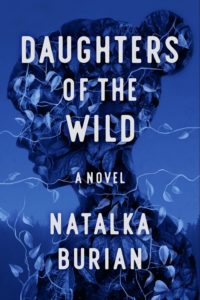 Daughters of the Wild by Natalka Burian is available now via Park Row Books.

Natalka Burian received an MA from Columbia University where she studied Eastern European literature with an emphasis on the work of Leopold von Sacher-Masoch. She is the co-owner of two bars, Elsa and Ramona, and City of Daughters, a line of specialty cocktail goods. She is the co-founder of the Freya Project, a fundraising reading series, which supports small, non-profit organizations doing crucial work in communities that do not always support that work. She is also the author of the novel Welcome to the Slipstream; her latest is Daughters of the Wild.

On the Unexpected Hopefulness of Don DeLillo’s The Silence 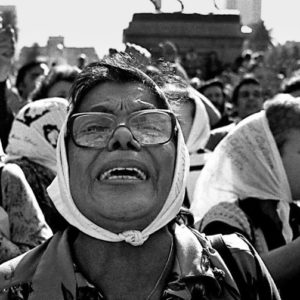 He had spent several months, exactly from the beginning of April 2014 until the end of March 2015, working on his diaries,...
© LitHub
Back to top
Loading Comments...