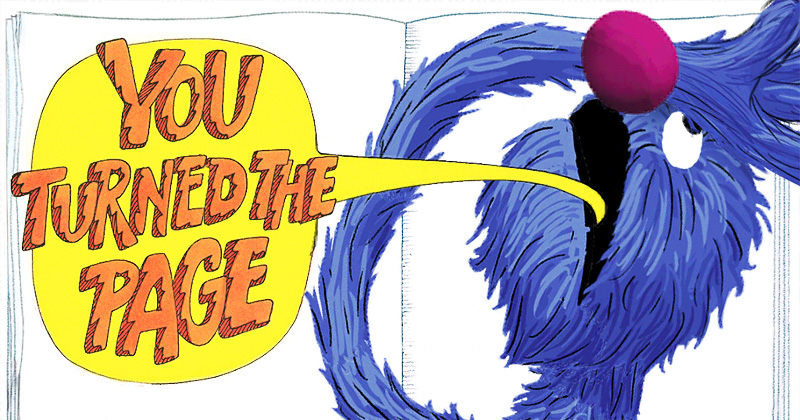 When you publish a novel, people want to know who your influences are, just as a low-level criminal is told to cough up the names of the masterminds who actually dreamed up the scheme that got him taken in. In my case, I have ready answers. My new novel, The Epiphany Machine—which tells the story of a device that tattoos epiphanies on the forearms of its users—has two obvious influences: the famous “epiphany” stories in James Joyce’s Dubliners, particularly “The Dead,” and Franz Kafka’s “In the Penal Colony,” about a torture apparatus that inscribes the crimes of the condemned on their skin.

So I have two big names to yield to interrogators. But, small-time crook that I am, I’m lying. Or at least not telling the whole truth. The book that had the biggest influence on me is not by an icon like Joyce or Kafka: it’s the 1971 Sesame Street book The Monster at the End of This Book. That’s the book that formed my sense of what literature could and should do.

The cover of The Monster at the End of This Book shows a smiling Grover enthusiastically greeting the reader—who, unbeknownst to him, will soon become his tormentor—beneath a billboard displaying the book’s title and subtitle (Starring Lovable, Furry Old Grover). On the next page, we discover that he has done what no fictional character should do—looked at his own cover, which makes him realize he is in this book and is therefore in trouble. Confiding that he is “so scared of monsters,” he devises a shrewd, simple, reasonable plan: the reader should stop turning the pages. All the reader has to do is anything other than keep reading, and Grover will be safe.

Of course, the reader turns the next page. Grover, wanting to believe that people are basically good, assumes the reader simply does not understand that the act of turning the pages will bring Grover to the monster, so he tries to save himself from the reader and the reader from themselves by tying the pages together, nailing the pages shut, and finally building a brick wall. Each time, the reader, giggling with delight, destroys Grover’s barrier (“Do you know,” Grover asks, “that you are very strong?”) and brings him closer to the monster. 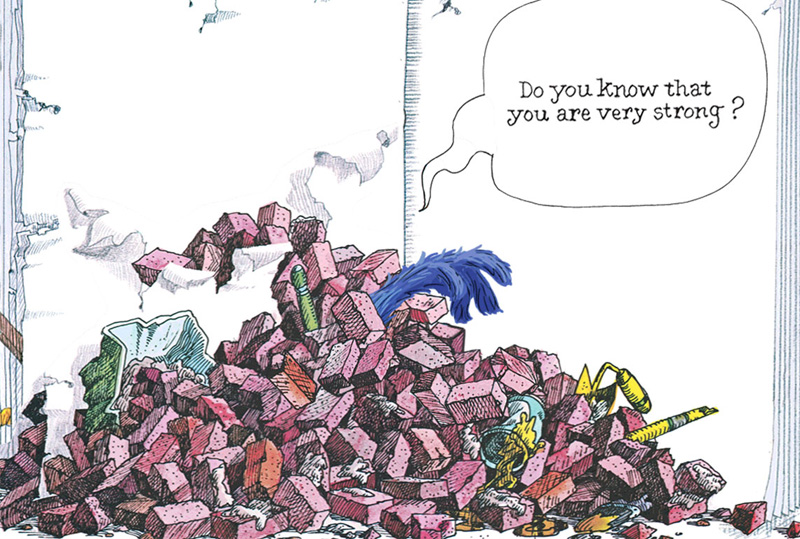 Finally, Grover breaks down, clasps his hands, and, sweating, begs the reader not to turn the page. The reader, inflamed by Grover’s desperation, turns the page.

Here is where Grover makes his discovery—“This is the end of the book, and the only one here is me—I, lovable, furry old Grover, am the monster at the end of this book.” He tries to pretend that the reader was the one who was scared. The final spread shows Grover holding his head in his hands at the corner of an empty, all-white expanse, no longer addressing the reader, but thinking in a bubble: “Oh, I am so embarrassed . . . ”

Obviously I don’t remember exactly what drew me to the book; this was before I knew that attachment to a book was something that required an explanation. But I think I sensed something agreeably weird and different in it. Other stories expected the reader to passively identify with a brave hero, who contended with some form of monster. I loved a lot of those stories; I was obsessed with Star Wars. But here was a story that asked the reader to actively oppose a cowardly hero, to drag the character against his will into conflict with a monster that turns out to be himself. Like most children’s stories, it builds up a child’s sense of personal power (“Did you know that you are very strong?”), but in a dark way that makes it difficult to avoid acknowledging, on some pre-verbal or at least pre-analytical level, the basic sadism of reading.

When we say that drama is about conflict, we mean, in part, that readers want terrible things to befall the people we read about; if they don’t, we rightly complain that nothing is happening, and only then do we do what Grover has asked us to do, and stop turning the pages. I liked that The Monster at the End of the Book treated me as grown-up enough to let me in on that.

“Here was a story that asked the reader to actively oppose a cowardly hero, to drag the character against his will into conflict with a monster that turns out to be himself.”

And if I hadn’t fallen in love as a child with The Monster at the End of This Book, I’m not sure I would have fallen in love as a teenager quite so hard, or in quite the same way, with Kafka, whose entire body of work, like the world itself, often seems guided by a child blissfully giggling while leading its inhabitants to destruction. Many of his stories tell of creatures who are hunted by something obscure (his story “The Burrow” is basically The Monster at the End of This Book if it ended before the final revelation), and all of his characters could plausibly be played by Grover. (It seems a missed opportunity that there is a Muppets Christmas Carol and a Muppets Treasure Island, but so far no Trial on Sesame Street, with Grover as Josef K., or Sesame Street Penal Colony, with “Lovable, Furry, Old” inscribed onto Grover over and over again.)

I’m also not sure that, without The Monster at the End of This Book, I would love Joyce’s “The Dead” in quite the same way. I first read “The Dead” in the backseat during a long family car trip the summer I was 14, dutifully turning the pages as the aging academic Gabriel Conroy discussed Irish politics and other topics at an endless, boring party, hoping to prove to myself that I was the budding young intellectual I hoped to be. My interest perked up when Gabriel, convinced he has given a rousing speech for his aunts, believes he sees erotic interest from his wife, Gretta, and takes her back to their hotel for what he thinks will be a rare evening of middle-aged lovemaking. Instead, he discovers that Gretta still harbors feelings for Michael Furey, a boy who died for her when they were teenagers. Gabriel discovers how “poor a part” he has played in the life of a wife he has failed to properly notice—that he is a vain man fated to “fade and wither dismally with age.” In other words, he discovers that he is the monster at the end of the book.

I was still younger than Michael Furey had been, but somehow I recognized myself in the middle-aged Gabriel Conroy as some kind of vain fool, or at least as someone who would die. Conroy is torn open in the story, and I felt something opening up in me. It was the first time I saw that literature could, in Kafka’s words, “be the axe for the frozen sea within us.”

Except it was not the first time, not really. What makes The Monster at the End of This Book so enduringly powerful is that the happy twist at the end—that the monster is only Grover—is not so happy at all. “Lovable, furry old Grover” learns that he is the very monster he fears. We would not be interested in him if he were only lovable, any more than anyone is actually engaged by characters who identified as the even more wan “likable.” And yet the book is, as the saying goes, fun for the whole family. The Monster at the End of the Book taught me that fiction should be playful and funny, encourage a reader’s participation, and hold a twist in its tail that shows us who we really are: probably less a hero than some kind of monster. This is what I want my own fiction to be.

“What makes The Monster at the End of This Book so enduringly powerful is that the happy twist at the end—that the monster is only Grover—is not so happy at all.”

Insurrections author Rion Amilcar Scott, whose short story “The Party” touches on the way that Sesame Street has a way of teaching both children and adults about mortality, told me that he enjoyed The Monster at the End of This Book­—which he encountered only as an adult, when he read it to his son—for its “winking weirdness at death.”

In the closing pages of Scott McClanahan’s newly published The Sarah Book, presented as a “semiautobiographical account” of a divorce, the narrator sits on the couch with his children and reads The Monster at the End of This Book, a book he remembers from his own childhood. As his children laugh at and gleefully ignore Grover’s pleas not to turn the page, he tells them that “the best thing about books is that you can turn back and start all over,” remembering as he says this that “life is not a book.” “I could see right then,” McClanahan writes, “that I was just like Grover, and I wanted everyone to stop turning the page.” Of course, McClanahan is being playful here. He has just put painful experiences in a book, and we can reopen that book whenever we want, to make the character who shares his name experience pain again and again.

Am I over-intellectualizing this? (“Oh, I’m so embarrassed!”) Now I am closer in age to Gabriel Conroy than Michael Furey; I am about the age my parents were when I loved The Monster at the End of This Book, though I am still childless. I once giggled with power over the absurd creature begging me not to turn the page. Now I look at Grover and then the monster in the mirror. Old? Check. Furry? Check. Lovable? Well . . .

Rereading The Monster at the End of This Book as an adult, you get the sense of pages closing, of an end that will continue to approach no matter how you try to nail the pages shut. There is an end to every book, and the only one there is you.

David Burr Gerrard is the author of The Epiphany Machine (Putnam, 2017) and Short Century (Rare Bird, 2014). He teaches creative writing at The New School, the 92nd Street Y, The Yale Writers’ Workshop, and Catapult. He lives in New York with his wife and daughter.

So You've Decide to Write: What I Learned Editing Hunter S. Thompson 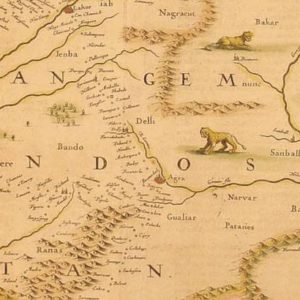 My stories, my family's stories, were not stories in India. They were just life. When I left and made new friends...
© LitHub
Back to top
Loading Comments...