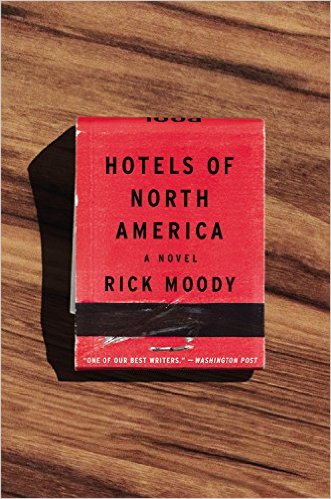 The following is from Ricky Moody’s novel, Hotels of North America, about Reginald Edward Morse, one of the top reviewers on RateYourLodging.com. He is the author of four previous novels: The Four Fingers of Death, Purple America, The Ice Storm and Garden State, as well as an award-winning memoir and multiple collections of short fiction.

There is a style of hotel that we in the reviewing business refer to as assisted living, because of its interior stylings, its floral wallpaper, its imperial draperies. An assisted-living-style hotel always has cotton balls in a little ceramic dish in the bathroom, and a scale, because the elderly lobbyists who stay in a hotel like this, lobbyists for the concrete industry or for pork-products trade groups, are constantly worrying about the extra fifteen. The Dupont is one of these senior-services habitations. The bathroom is heavily outfitted with doilies, the counter faux-marbleized in brown, the wall equipped with a magnifying makeup mirror, an essential accoutrement due to the macular degeneration of the guests, and there’s a photo, just above the shitter, of the White House. I did not attempt it, but I am certain that you could, while crouching on the shitter and looking into the mirror on the wall opposite, see yourself with the White House hovering just above your head like a sort of pith helmet.

We did not belong at the Dupont Embassy Row. K. and myself were far from the senior-citizen demographic. It was the Toastmasters who suggested we stay here so that I could participate in their public-speaking contest, which I had, delivering a speech on the subject of first impressions. The interior of our bedroom there at the Dupont was fine, if small, but it somehow reminded me of my alcoholic grandmother back in Westport and how on occasion, as a small child, I would sit with her on her enormous king bed while she swigged her distilled spirits and did crosswords. It is not possible, at this remove, to reconstruct the stink of decline that was probably indelible in these moments — juniper and toxic waves of grandmotherly perfume — and yet I have a lingering horror of any kind of interior decorating, assisted-living interior decorating, that suggests to me these memories. Too much mustard and brown, and drapery everywhere.

Did I say that the Dupont has cookies on a table in the lobby? I adamantly oppose the attempt to buy hotel allegiance with cookies. Where was I staying just a couple of weeks ago? MA? Or was it OH? Or MI? In any case, another dismal locale where they had individually wrapped cookies on a tray, as if the cookie were enough to curry favor. The cookies in that instance were heavily machined. They had been produced in an enormous airplane hangar somewhere and trucked to this and other identical locations, and the cookies were perfectly chewy. No doubt a focus group had indicated the characteristic of the ideal chip-based doughy confection was chewy. There was probably some kind of anti-compulsive psychiatric medication liberally added to this trucked-in gross of cookies so that people like me, who could not stop eating the cookies once they were offered, would not continuously sneak down to the lobby in the soulslaughtering hours between two and four a.m. to steal six at a time, finishing most of them before getting back to the room.

Now: The cookies at the Dupont were somewhat different from the cookies at the chain in MA or OH or MI. These cookies here looked great because they had M&M candies in them, in particular red M&M candies, and, being on Dupont Circle, these cookies shimmered with distant reverberations of American political power. The cookies were also timely because we were staying at the Dupont during a major merchandising opportunity — namely, Halloween. But whatever attempted purchasing of consumer allegiance had resulted in the existence of these cookies, which sat on the serving tray next to some moldering out-of-season strawberries and grapes that had probably been recycled from their use as a garnish for a room-service plate two weeks earlier, there was, I need to say, a significant gap between the perception of the cookies and the actual cookie experience. In this case, the cookies, unlike those in MA or OH or MI, were, in the area of mouthfeel, unfresh, and when I am stressing, in a lecture on motivational speaking, how certain words can do a lot for you, fresh is often a word I rely on. So I am using fresh here with a genuine understanding of its merits. The cookies in the lobby of the Dupont, which had M&M candies in them and looked fresh enough to make any granny happy, a granny who would already be bowled over by the presence of astonishing amounts of wood paneling, golden drapery, and elevators near at hand, were, unfortunately, unfresh, more like an arid-desert confection. So as K. and I walked out of the Dupont to try to find a steak joint in the Dupont Circle neighborhood, we broke the complimentary cookie obtained in the lobby into small pieces and flung it over the fence of the Indonesian embassy, thinking that the scheming and warlike Indonesians were probably out at the time, and in the event that the Indonesians had not fed their local squirrels.

Have I mentioned that the lounge at the Dupont was the very favorite District of Columbia lounge of a historically important and cadaverous First Lady of the United States of America? Yes, cadaverous, and given to the horoscope, if you catch my drift. That First Lady was known to visit this selfsame lounge in this very hotel where K. and I were staying on this occasion. Perhaps only twenty-five years or so prior, a mere quarter century, she had swept into the lounge with her entourage while elsewhere her man was drifting off into a fog bank of amyloid tangles. Though I am no longer permitted to visit a cocktail lounge, I did walk down the dimly lit corridor to the lounge at the Dupont in order to see the place where the cadaverously thin First Lady once held court. That the Dupont has preserved itself in that bygone time, in the image of the 1980s, reflecting the glory that was the cadaverously thin First Lady, is an observation not to be controverted. The elevators were unchanged, the wood paneling was the same, the gymnasium was the same, with its barely functioning treadmill; the menu had been marked up, price-wise, but was otherwise probably very similar. The rooms had been rehabilitated, but with the same assisted-living color palette. Everything there was knickknacks and designer chocolates, down to the small canvas bag containing the hair dryer.

Now, it is true that K. and I tried to abscond from the Dupont in such a way as to minimize our exposure to the costs of staying, this when we found out that the charge for overnight parking was forty dollars and that the online connectivity would cost us twelve dollars a day and that a bagel in the restaurant went for seven dollars, price points that are somewhat beyond our nomad budget. I do not recommend attempting to abscond, because it does put you in a disagreeable relationship with the hotel management. As I have said, I had competed in the Toastmasters national contest, speaking on the subject of “First Impressions: How to Make a Good One,” a lecture I have delivered with piledriver-like relentlessness in many regional settings. I had scored high. These days, though, the prize often goes to someone who has triumphed over adversity, someone with a missing limb, or creeping paralysis, or something similar. On this occasion, I also heard speak a certain professional fellow with exchangeable or reversible first and last names, and this professional lobbyist had charm in surplus — he could have talked the entrées in the ballroom off the table — and it turned out that he was the head of some trade association that had to do with, of all things, hotels. Although it has taken me more than a year to finalize this, my first posting, I am happy to tell you that this was the moment I got the idea to start publishing online my thoughts about hotels and motels. While listening to the fellow with the reversible names talk about the hotel business. I started taking notes then and there.

Let it be said, however, that though I admired his style, his way with a modifier, K. and I could still ill afford even the incidentals at the Dupont, which, at at least sixty-two dollars, were more expensive than some rooms we have inhabited (for example, the Motel 6 on Idaho Street in, Elko, Nevada: fifty-five dollars a night). Having given my speech on the usefulness of the firm handshake and the importance of making eye contact, and having been bested in the contest by others, I did not feel that it was right to stay another night in assisted living, and so I tried to seize my car by claiming a medical emergency featuring acute pains in the lower-right section of my GI tract, halfway between the jutting of hip bone and navel. It could have been a puncture, I told the valet; there could have been a puncture, as I had recently undergone my first routine colonoscopy. Was he aware of the risks of routine colonoscopy? A puncture in the wall of my sigmoid colon, if untreated, could result in peritonitis or, worse, sudden death, because of leakage of the contents of the bowel into the bloodstream. K. manufactured some tears in order to facilitate our expedient relocation. The guy in the garage volunteered to call for an ambulance, but we demurred, saying we could not wait, we had our bags and were ready to go, and that was when some of the management-level enforcers of the Dupont Embassy Row appeared and presented us with the accounting. ★★ (Posted 1/7/2012)

From HOTELS OF NORTH AMERICA. Used with permission of Little, Brown and Company. Copyright © 2015 by Rick Moody. 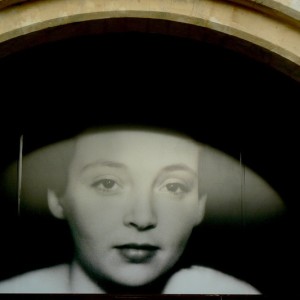 GUIDEBOOKS FOR THE DEAD Inescapably, Cynthia Cruz's poems are otherworldly visitations. Yet upon closer inspection, all of their ingredients eerily...
© LitHub
Back to top