Honey, I Killed the Cats 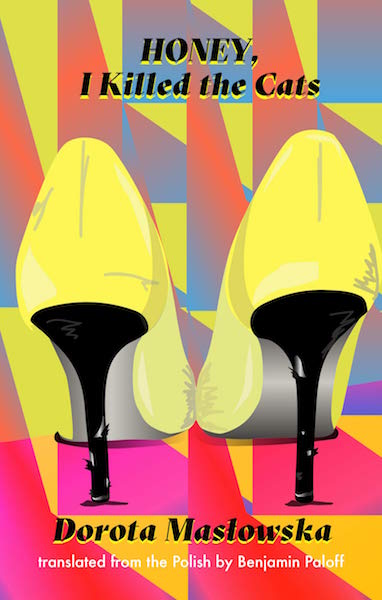 The following is excerpted from Dorota Maslowska's novel Honey, I Killed the Cats translated from the Polish by Benjamin Paloff. Her first novel, Snow White and Russian Red was published when she was in high school, and after becoming a sensation in Poland, was then translated into ten languages. She is also a playwright, a columnist, and a journalist. Benjamin Paloff is a poet, works in Polish, Russian, and Czech and is an Associate Professor of Slavic and Comparative Literature at the University of Michigan.

When Farah and Joanne first met . . . It was April, or May even, hard to say now, though you could definitely nail it down going by their text messages . . . They hit it off fatally right from the get-go, and they talked all evening, walking intently up and down Royal Barber Street, totally incapable of parting (“And you get it, she had on this blue velour dress, anyway, velour wears out fast.” “Speaking of blue, these blue sweats I’ve been wearing lately when I drive to yoga . . .” “Get out of town, I always walk to yoga.” “I like walking in general, but with a quick, springy step, never slowly.” “My nephew is very slow. I swear you’ve never seen a more sluggish shithead.” “My nephew eats everything with ketchup. Can you imagine? He’ll eat his cornflakes with ketchup if you don’t catch him in time!”). And however  many times it seemed they’d run out of things to talk about and that there was nothing left to add, they would turn right around and find a lot to latch onto, no problem, something always occurred to one or the other (“Unfortunately, ketchup is totally carcinogenic.” “Speaking of which, my Aunt Albie has bone cancer.” “Oh, the poor thing! That must really hurt.” “It’s a good thing she’s religious. Studies say that religious people are better at handling pain. Would you like some antibacterial gel?” “Sure, a little, thanks. Though I feel sorry for the bacteria.They’re living creatures. I know that sometimes I sound like a nut.” “No, why? It’s your right to think that.” “It’s because of my Buddhism—it’s completely changed my point of view.”), and there was nothing to suggest that things would someday take the turn they did.

The evening city was seething in its basin like black soup garnished with glass and light, bubbling over with secrets and excess; dogs barked, the subway wailed, someone who’d been raped or had merely had her handbag snatched was screaming horribly in the distance, and artificial fires flared into the darkness over the river, promising that, still, anything could happen.

Oh, you need to know what Joanne looked like, objectively, and then you’ll get the paradox of the situation for yourself. Anyway, you might have seen her a few times before, since she worked at the salon by the subway entrance on Bohemian Street, the one next to Chase. You’ve probably caught a flash of her face, with its rather fleshy mouth and cheeks like currants, an alabaster face arched like a doll’s and with makeup to match, all protruding lashes and meaningfully upturned eyes, with hair the color of artificial chestnut lacquered to the point of perfect imperviousness to the most severe weather conditions. She was always dressed according to a formula known only to her, something like “comfortable yet ugly, with a hint of extravagance,” masking her assets by excessively exposing what didn’t call for it. She avoided cotton, jeans, and other symptoms of textile banality, reserving particular esteem for stunning creations whose operatic lace puffed out like fire retardant over her abundant bosom; their ordinary uncommonness would “break through,” first with their classical elegance, then with their athletic motifs, and ultimately giving off the appearance of a Russian girl coming home from New Year’s every day of her life.

No, Joanne was certainly not very attractive.

That’s what Fah thought, and she also thought that hers was unfortunately an objective opinion. Jo had thin legs and always wore ragged stilettos with heels that had been plucked off and decentered like they were cross-eyed, and that she notoriously painted with nail polish; this unstable load-bearing construction nearly buckled under her substantial corpus. Her head had been planted directly onto her shoulders, as if the Creator had felt like using her person to test whether the invention of the neck had not been an entirely accidental occurrence.

So, should you desire to examine it, it would seem not to be there.

She had a low voice and laugh, the kind one usually hears at the crack of dawn in bars where sumo wrestlers are celebrating their triumphs alongside serial killers as the naked cross-eyed chicks and rough-hewn dragons are writhing in their secret travails up the latters’ backs.

The evening city was seething in its basin like black soup garnished with glass and light.

She wasn’t interested in anything, and that was fine by her; she mostly listened to awful shopworn songs and would hum them off-key while cutting her clients’ hair; she didn’t know how to cook, and she’d watch whatever was on TV, didn’t matter if it was Blow-Up or a documentary about rutting antelopes or a show about the lives of people who exercise on elliptical machines; she couldn’t care less about a movie’s title, its director, how it ended or how it began, she just took television in like a rapid stream of illusion in which she eagerly splashed without rhyme or reason. Which meant rarely, if she was using antibacterial gel.

“It dries out my hands!”

“Jo?! Did you see the guy who was holding on to the bar before we got on?”

Furthermore, she never had time for anything, because besides the salon on Bohemian she was always running pointlessly around with the totally wrong guys. Much of her attention was consumed by setting erotic snares, friending people on Facebook, scoring addresses and telephone numbers, sending risqué texts, arranging the perfect circumstances for her to bump into the current object of her affections with a mug of steaming-hot coffee, pouring most of it over herself, so that summa summarum most of her hours were spent nursing her scalded heart with whiskey on the rocks and puttying it back together with the huge rainbow-sprinkled muffins she bought at Loraz Markets.

Yes, perhaps she dreamed of love.

Though she maintained that it was quite the opposite.

During their chance meetings, she’d caught the scent of his body. He smelled like a goat that’s just brushed its teeth.

“Promise me something, Fah,” she said one day as they were on their way to get coffee at that utterly trendy Bad Berry, where various oddballs sit out the livelong day, exposing the world to their exceptionality, the crux of which, it turns out later, is situated in their glasses frames . . . The coffee’s coffee, no revelation tastewise, and Fah thought that she might be out of her mind to be paying eight dollars for a regular coffee. Out the window stretched a view onto dusty Bath, opalescent in the heat, full of commotion and afternoon bustle, of mothers with children and schlubby hipsters in alpine caps despite the heat, with bags that recalled old scrota. “Promise me something, Fah,” Joanne said. “From now on we’re done with ratty old boys, okay? No more boys, no more socks, no more sound of them scratching their balls in the sleepless night. Promise me. Death to douchebags!”

“Anyway, to be honest, I wonder whether I’m a lesbian. In the long run, when I think about it, there’s something to it, don’t you think?”

“Why aren’t you saying anything? You never thought about being a lesbian? I think it’s terribly sexy.”

Is there really any point to saying what happened next? Almost immediately following these declarations, which, after all, had not originated with Farah, Joanne fell in love with a pathetic—yes, pathetic, in Fah’s opinion—salesman at a kitchen and bath store, allegedly with a degree in Hungarian Studies but unable to find work in his field, we all know the drill. A scrawny sort of fellow, eternally entangled in the spiderweb of his own limbs, plus with a shiny little bald spot that he concealed obsessively beneath cunning strokes of his hairbrush. But a bald spot that, despite his efforts, was unruly and inquisitive, in its own way intelligent, and time and again would emerge like a sensation-greedy egg out of the fluffy, if sparse, hay of his hair, casting its cheerful flashes of light left and right.

Setting aside the oath she’d sworn to herself not half a second before, which, let us recall, had not originated with Fah . . . but come on . . . that bald spot . . . it could cave in. Joanne was obviously delighted and would turn up the volume whenever the radio played that moronic commercial for Tip-Tap Kitchen & Bath, where he worked (“For Tip-Tap faucets, get your faucets at Tip-Tap”), and she made everyone listen as she sank into utter bliss. But Fah thought all of this was at the same level of disgusting as their dates, she thought it revolting how this tapeworm would speculate or even dream on the topic of her friend’s physicality, how squeezing her hand gingerly at the movies, running his fingers along her papillary lines, he would turn his thoughts, if only in his mind, to pressing against her body with his own . . . Several times, during their chance meetings, she’d caught the scent of his body. He smelled like a goat that’s just brushed its teeth. But what pained and shamed her most was that while he was putting the moves on Jo, it was as if she, Fah, didn’t exist, as if she were made of air.

Anyway, when it came to her, he wasn’t convinced that she wasn’t. 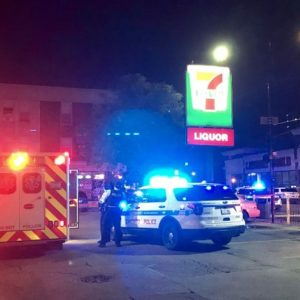 From Wall Street to Chicago's South Side: When Global Economics Make Local Progress Nearly Impossible Earl Johnson grew up in the Robert Taylor Homes, the child of a Mississippi-born single mother who worked as a nursing assistant....
© LitHub
Back to top