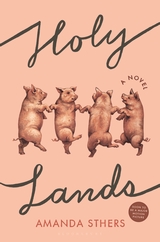 The following is from Amanda Sthers' epistolary novel, Holy Lands, which follows a New York cardiologist-turned-pig-farmer in Israel and his estranged family: nostalgic ex-wife Monique, estranged gay son David, and heartbroken-in-Paris daughter Annabelle. Amanda Sthers is the author of ten novels and several plays and films. She lives in Los Angeles.

I’ve followed all of your instructions ever since moving to Israel to breed pigs. I put them in a stilt pen over the sea just like the Hawaiians do. Not a single hoof will touch Holy Ground. Except, of course, if you agree that we should use them to hunt down terrorists. (Incidentally, I saw a photo in the New York Times last month of a soldier from the IDF with a pig on a leash and, frankly, I think it discredits our reputation for being hardcore!).

I have a deep respect for religion, even if I don’t really practice it, and I never meant to upset you.

Also, I found your letter a little harsh, and calling me a “son of a bitch” won’t change the fact that Israeli Jews can’t seem to get enough of bacon or that I sell it to them in a restaurant in Tel Aviv, by the way.

Personally, I don’t eat any since it’s too high in fat for my already high cholesterol. I’m just trying to make a living. If I don’t sell them pig, they’ll just go and buy it from a goy. Eggs and bacon are on the menu and there’s nothing you can do about it. They think it’s elegant, like chicken potpie or frogs’ legs.

What’s the story with pig blood, Rabbi? You remember the brilliant idea to hang blood bags inside city buses so any terrorists who wanted to blow themselves up would be covered in it and made impure? So they wouldn’t get into Paradise with the seventy-two virgins?

If you can manage to get me a contract with the public transport authority, I won’t have to sell any more bacon.

I thought that given your political ideas, which are different from those of other rabbis, and your open mind, you’d understand. Anyway, I have a million things to tell you that have nothing to do with pig farming, but I know you’re busy, so I won’t take up any more of your time and send you my deepest respect.

Either you take me for an idiot or you are one. It could be both and you aren’t aware of it. Do you see where I’m going with this?

Come to my house. We can discuss the Talmud and I will restore the faith you seem to have replaced with commercial, ultracapitalist beliefs. For now, I’m responding to your letter point by point, but briefly, because Passover is coming soon and I have a lot to do.

1. If everyone reasoned the way you do, there would be no more morality. No more good or bad. The fact that someone else might sell bacon to that restaurant for degenerates, US Aviv, doesn’t absolve you of the sin. If you were in a room with nine other men and a child who was starving to death, the fact that you ate the last piece of bread on the pretext that one of the nine others would have done it anyway does not excuse you: it would be you, YOU, who killed the child.

2. It’s been a long time since the poor Palestinians who blow themselves up on buses full of schoolchildren believed in anything at all, and even less so in the notion of virgins waiting for them. They’re just trading their lives for a salary that will put a roof over their families’ heads and guarantee they don’t go hungry.

You can keep your pig’s blood. It would be better to take bricks out of the wall that separates us, and not so we can throw them in each other’s faces, but rather to use them to build decent housing for the Palestinians.

3. Israel doesn’t give a damn about what the New York Times or anyone else thinks. We’re the most hated country on Earth, sometimes justifiably, sometimes because that’s just the way it is. We’re not trying to please anyone or appear to be anyone other than who we are. Your pigs have an unparalleled stench and they are useless to the army.

I’ll be expecting you at yeshiva. We’ll talk.

Wash yourself in grace.

I keep writing despite your silence. To maintain a bond. So I won’t one day find myself standing face-to-face with a stranger who’ll turn out to be my father. So that I don’t forget you.

Are you still mad? Because of that simple announcement? That simple phrase that changes my entire existence but not yours? Yes, I love men. Or “one man,” I should say. I am in love, Dad. Don’t you want to meet the person that makes your own son happy? Don’t you want to talk to me and hear my laugh?

It’s strange, the less I see you, the more I take after you. I look for you in my mirrors. I have your hair. The warmth of your hands in mine, even in winter. I surprise myself by wearing the turtlenecks I hated as a child and that you never went without when we lived in London. I have the same bald patch on my face that you can see now that I’ve grown a beard. I’m enclosing a photo.

I hope you’re enjoying this strange adventure. To think that you refused to let me have a pet! Not even a goldfish! And now you’re a breeder. Do you have anyone working for you? How many pigs do you have? Don’t tell me it’s you who takes care of them. Do you have boots and overalls? Mother tells me you don’t have a phone, but I don’t believe it. I wouldn’t dare call you anyway. Silence hurts less on paper. We’re all separated—Mother, Annabelle, you, and me. You’re a piece of a puzzle on the wrong continent.

Dear ex-husband who nevertheless remains the father of my children,

I’ll be brief and to the point. You’re a hopeless old schmuck. Your son has written you hundreds of letters and you haven’t answered a single one.

If you could only see the success of his plays on their opening nights—applause that brings down the house. “A genius playwright,” that was the headline in La Repubblica after the performance in Rome last week. But do you think he was smiling? No. Like every evening, he spent the whole performance watching the door instead of the stage, hoping he’d see you walk in.

Yell at him! Have an argument! Anything would be better than your cruel silence!

On the other hand, I want to thank you. I’m invited to all the New York dinners ever since you started breeding pigs. Every time I tell the story, it’s a hit, although I’m not sure it’s doing anything to reduce anti-Semitism!

Sniffer pigs for terrorists. Hahaha! And to think you got me to convert only for it to come to this.

Do you remember our first dinner over barbecue? How to pick up a goy?

Anyway, business is good. I’ve got new, interesting, and lucrative projects. Thank God for that, because with the alimony you give me…

Did I tell you that old goat Marina Duncan got remarried? To a Russian. Not a Jew. Just a Russian. And she had a face-lift. If she smiles, she’s going to crack.

Any news from Annabelle? That’s pretty. “News from Annabelle”—it could be the title of one of David’s plays. She doesn’t tell me anything. I think she’s sad. She’s in Paris, but she’ll be coming back to New York as soon as she gets her damned degree. More than ten years of studying! She goes from an MBA to a doctorate—and for what? Just give us some grandchildren already!

Well, write to your son. His fiancé is charming, by the way. And get a telephone!

You call that brief? Your letter is two pages long and you drive me nuts.

From Holy Lands. Used with permission of Bloomsbury Publishing. Copyright © 2019 by Amanda Sthers. 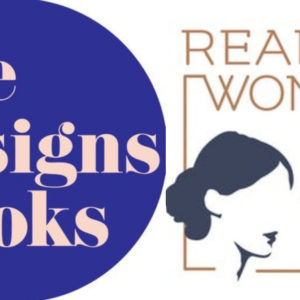 She Designs Books: Anne Twomey and Nicole Caputo Celebrate Women in Book Design Reading Women is a weekly podcast where women discuss books by or about women. Each month features two episodes on the same...
© LitHub
Back to top