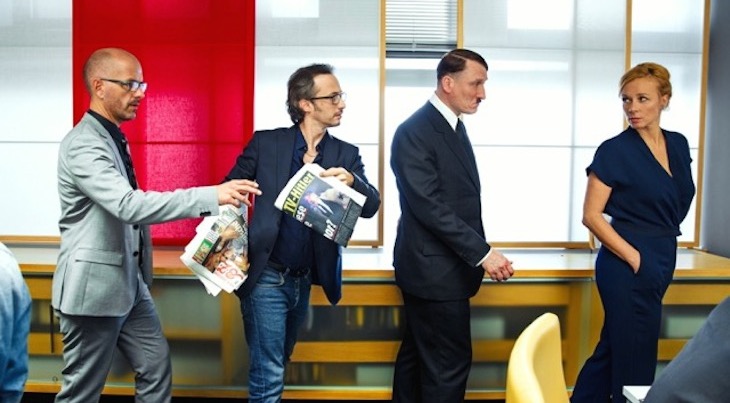 Hitler-Spotting at the Frankfurt Bookfair

He’s taller than the original, and has more smile lines. Oliver Masucci plays Hitler in the new film adaptation of Timur Vermes’s Er ist wieder da, published by MacLehose Press in the UK in 2014 as Look Who’s Back. (Quercus came out with the book in the US in May.) The film riffs on the satire of a resurrected Hitler by adding unsettling real footage of Germans interacting with, and confiding in, his ersatz double. “It’s a book that can be grasped easily,” Katharina Bielenberg, associate publisher at MacLehose told me. “You can tell the story literally in a sentence: He’s back and he’s serious. But underneath it’s complex. The responses are complex.”

Helene Hegemann, whose teenage anthem Axolotl Roadkill of 2010, written when she was 17 and now being made into a film, was at the Look Who’s Back premiere last week. She described her impression: “The film is maybe one of the very rare instances in which an adaptation of a novel tries to go deeper than the source material. Part of the film is documentary: Hitler, played by Oliver Masucci, travels through Germany and interviews passersby. In these scenes there’s a sociologically very interesting moment: in the faces of the passersby one sees how they actually begin to believe Hitler is standing there in front of them. And they solidarize with him, at least in part truly unconditionally and ready to sacrifice themselves. That is crazy and really radical.”

Licensed to 41 countries and with 2.3 million German-language copies sold (and nearly 150,000 in the UK), the book approaches another recent German title with a worldwide audience: Daniel Kehlmann’s Measuring the World. The book’s translator, Jamie Bulloch, is busy. “It does seem to be that German literature is getting a slightly higher profile, which is a good thing. It challenges the prejudice that at least the English have about German humor. Quite a lot of contemporary German writers that I read and translate have quite a good sense of humor: very accessible, full of irony. We think of this in the UK as our particular selling point. This blows that out of the water.”

So Maren Keller, who covers literature and culture for news magazine Der Spiegel, is excited for Ach diese Lücke, diese entsetzliche Lücke (Kiepenheuer & Witsch), the third book in a cycle by Joachim Meyerhoff about a child who grows up on the grounds of a psychiatric hospital where his father is the director. Theresia Enzensberger, 28 and just having launched her own eclectic art and literature magazine, BLOCK, especially likes the Gramsci-inspired novel 36,9 by Nora Bossong (Hanser), Nachts by Mercedes Lauenstein (Aufbau) and ALFF by fellow Millenial Jakob Nolte, about a group of teenagers in an imaginary 1990s New England. (The book was published first as an e-book by the German-English online project FIKTION and picked up for hardback by Matthew & Seitz.)

And yet. Translator and critic Robin Detje (he won last year’s Leipzig Book Fair prize for the German version of William T. Vollmann’s Europe Central) sized up the contemporary German literary scene in an email: “Contemporary German Lit (CGL): Last time I checked, everybody’s favorite genre was ‘Watch me turn my family history into a sob story in an incredibly complex but also highly readable way’; favorite subgenre: ‘Look, I went to the attic and found my Jewish grandmother.’ This summer in Klagenfurt, ‘perky’ and ‘chipper’ seemed to be trending.”

Political correctness aside, surely things could be worse? “The German literature scene keeps reminding me of Jame Gumb, the serial killer in Jonathan Demme’s film The Silence of the Lambs,” Detje continued. “He wants to be a woman, therefore he kills women and makes himself a woman-costume out of their skin. Awkward. Somebody told the German literature scene that literature is supposed to be emotional. Jame Gumb is not a woman. German—the nation, the language—is not emotional. Passion is not its strong point, bureaucracy is. German works best in a police report. Which is fine, literature can play with that beautifully. But instead it must force itself to be emotional, rather than being itself. The awkward results are the stuff of a horror movie that still needs to be made.”

From the foreigner’s perspective German book publishing looks pretty robust. Bookstores benefit from a legally enshrined fixed book price agreement, there aren’t yet any time-consuming German language “must-see TV” series (though Deutschland 83, which premiered subtitled on the Sundance channel this summer, is airing on RTL this fall)—young people read. “People long for books very much,” said Christian Dunker of Berlin-Charlottenburg’s Autorenbuchhandlung, founded as an author’s collective bookstore at Savignyplatz. His favorites for the fall are the German translation of JJ Abrams and Doug Dorst’s S., published here as S.: Das Schiff des Theseus, and Kai Weyand’s Applaus für Bronikowski. “Once in a while a man enters the shop,” Dunker joked. “We can be very happy for a book like this.”

Der Spiegel has just launched a monthly books-and-readers focused supplement, LITERATUR SPIEGEL, described by its head Lothar Gorris as “reviews, essays, reprints, excerpts, criticism… whatever.” The newspaper-within-a-magazine “won’t cover the ivory tower of the literary scene,” Gorris told me. “We’ll try to present interesting books in an interesting way.” It has to do with the strategies of the house, he explained. “We know that Spiegel readership is very interested in books. New books in Der Spiegel have a massive impact on sales in Germany. But you can’t cover it all… We thought, ok, if we do once a month, a supplement, we could do stuff our readers want to know, and we could be very clear about what’s part of the Spiegel and what’s part of LITERATUR.” It also helps that the book market is largely female. “Spiegel, like all print media, has a problem with women. Our readership is around 60 percent male.”

Now the about-to-be-announced Deutscher Buchpreis [Ed. note: The 2015 Buchpreis was announced after this story was filed], the prize for the best novel of the year in the German language (the closest equivalent would probably be the Booker) and instituted just over a decade ago, is helping publishers and bookstores sell to a lit-hungry but perhaps “CGL”-unfamiliar public, accustomed to a steady diet of translations. “The Deutscher Buchpreis is taken seriously by readers,” Guido Ullmann, head of the belletristic department at Dussmann, Berlin’s KulturKaufhaus (“cultural department store”—they have those here) told me. Though controversial for instituting a kind of winner-takes-all competition, the prize counts. Former East German writer Ingo Schulze wrote to me that it’s a bit uncomfortable now for writers, as one now wonders, “Will I make it to the long list? Short list or further? For those who luckily make it on to the lists, it’s of course a benefit.” Of the short list the two that seemed to be most talked about were Die Erfindung der Roten Armee Faction durch einen manisch-depressiven Teenager im Sommer 1969, by Frank Witzel, set in postwar Wiesbaden and written from the perspective of a 13-year-old [Ed. note: this book, bane to headline writers everywhere, won the Buchpreis]; and Jenny Erpenbeck’s Gehen, Ging, Gegängen, about African asylum seekers in Berlin and their intersection with a German literary history professor.

Via email I asked Ingo Niermann, the speculative fiction writer and an integral part of the FIKTION project which published Jakob Nolte’s ALFF, which book he thought deserved the Buchpreis. “The best would be not to pay that much attention to the book prize and give a bit of the attention back to the great literary prizes that are not subsidized by the market,” he wrote. “The Bremer Literaturpreis, the Kleist-Preis, the Marieluise-Fleißer-Preis, the Nicolas-Born-Preis, the Alfred Döblin-Preis.” (There are more.) But the German book prize, perhaps the closest German equivalent to the Pulitzer, National Book Award or Booker? “I must admit,” wrote Niermann. “I couldn’t care less.”*

Ist mir egal. The term means “whatever,” “It’s all the same to me.” It’s also, apparently, a kind of genre: Who cares, it’s all scheisse, let’s go to Tresor (they’ll let you in if you’re a tourist fresh from the Buchmesse, unlike Berghain) and dance till tomorrow midmorning, after which we’ll eat a sensible breakfast, one which includes several different kinds of lunchmeats and a selection of freshly baked rolls. “One could of course say, if it’s all egal to you, why do you write about it?” asked Kurt von Hammerstein of Hundt Hammer Stein, the Berlin-Mitte underground bookstore. (It’s Germany. The store is literally underground.) But egal—von Hammerstein is excited about debut novel Superposition by Kat Kaufman, St. Petersburg born and a veritable crone at 34. Superposition is about a youngish jazz pianist, though one caught between a lecherous manager, dwindling hotel gigs and the shittiness—Beschissenheit—of things generally.

“It’s actually the critics these days who have a narrow idea of what German literature is, what a novel is,” FAZ art and architecture critic and Harvard Graduate School of Design professor Niklas Maak told me. Maak, a fan of Kaufman’s book, continued: “They’re glued to an idea of realism.” (Maak is himself author of the just-translated architecture manifesto Living Complex: From Zombie City to the New Communal from Hirmer.) Maak would have liked to have seen Peter Richter’s 89/90 on the short list, which tells the story of Dresden in the year after the Wall came down, and the anarchy that ensues when a society’s institutions collapse. What the sudden absence of the state does to people is a timely topic. “But it was kicked out because it blurs an autobiographical part of the artist’s life. There’s this obsession among German critics with declaring things not to be a novel. ‘Interesting, but not a novel.’ It’s an arts-and-crafts idea of literature.”

It’s a lot to process and if Christian Dunker of the Autorenbuchhandlung is right and German authors tend to be timely about political developments—“readers are aware that authors deal with same subjects they do in their lives, and German authors are very timely in terms of political issues”—it should usher in an interesting time for German writers, suddenly served with the topic of a million-plus refugees. (Theresia Enzensberger, the BLOCK magazine publisher, thinks there’s also a niche, at least in Berlin where there is now a small village of expat writers working in English, for an English-language agency/publisher.)

“I think the German literary scene is quite healthy at the moment,” Kurt von Hammerstein wrote. “Lots of good new authors and debuts, not all to my liking, but as a bookseller I have to say, we sell more German books than we used to, and I do think this is partially thanks to the Deutscher Buchpreis, which took away the audience’s focus on Anglo-American literature for a bit, which is nice.” After all, why not here?

*Ingo Niermann emailed me after the Buchpreis was awarded to Die Erfindung der Roten Armee Faction durch einen manisch-depressiven Teenager im Sommer 1969, by Frank Witzel.  “I must admit I’m really overwhelmed by the decision of the jury for Witzel. Even though Witzel’s book is following the logic that for the Buchpreis you shouldn’t write about something that is not rooted in your own past, that novel does it in an outstanding and pretty fictitious way. I was pretty sure that they would only put such a title on the shortlist to then drop it… This time I was proven wrong.”

Tara Bray Smith is the author of the memoir West of Then: A Mother, a Daughter, and a Journey Past Paradise, the novel Betwixt, and is currently working on a third book in Berlin, where she lives with her husband, the photographer Thomas Struth.

Judging the National Book Award Shortlisters By Their Covers 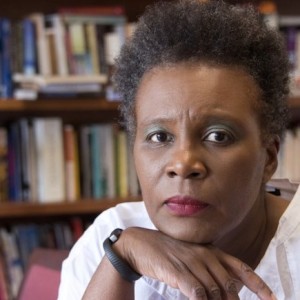 In part two of Paul’s conversation with Claudia Rankine (that took place at the end of summer) she discusses her book,...
© LitHub
Back to top