"All of us contribute to history"

I got the chance to sit down with Margot Lee Shetterly, the author of Hidden Figures, after a press conference for its upcoming film adaptation. Hidden Figures tells the little-known story of Dorothy Vaughan, Mary Jackson, Katherine Johnson, and Christine Darden, four math teachers at public schools in the South who were recruited to NASA during the labor shortages of World War II. Shetterly herself grew up in Hampton, Virginia alongside the black, female NASA mathematicians, engineers, and scientists that she details in her book. The process of working on Hidden Figures has been a whirlwind for her—the film rights were optioned before the book was even published. We discussed the adaptation, the concepts of historical canon and intersectionality, and what’s next for her.

Kristen O’Neal: First off, I love how you manage to make history read like a novel.

Margot Lee Shetterly: I got so lost in the history, and women, and the time—it became like time travel. I would still be writing and doing it if I didn’t have to make the book, because I loved it so much.

KO: I’m sure that seeing the movie is even more like going back in time.

MLS: It is! The people in Hampton, Virginia saw the movie last week; they had a premiere. I couldn’t be there, but Katherine Johnson was there, and her daughters were there, my parents went, NASA people—you know, all these people involved in the history—and they loved it. They loved it. They really remembered all these things. Even though a lot of the details weren’t what actually happened verbatim, the narrative dream was so seamless in the movie that they kind of were like, wait, did that really happen? Or, was that really her house? So they did a great job—as a moviegoer, I loved it.

KO: I was on the edge of my seat even though these events already happened—even though I know that John Glenn lived to be an old man.

MLS: Exactly, like Titanic, right? I was thinking about it, and it was sort of like the end of that movie, when they say, “You’re going to die an old woman, you’re going to be in your bed, and live a full life.”

KO: What was it like have the book being published at the same time as the movie was being made? It usually doesn’t work that quickly.

MLS: Yeah, not even close. It was really crazy. So, Donna Gigliotti, who’s the producer—who’s just a super-genius, visionary woman—she called me up, and I remember I was in Hampton at the time, coming from visiting Katherine Johnson. I pulled over into a supermarket parking lot and did this phone call with her, and just said, “I have not written a book, I have never written a book, I have a book to deliver, why are you talking about this movie, what is this?” You know, there were so many times when I thought, maybe I should have waited until I had the full book to option the film. But it just all worked out.

It was challenging to let go enough and trust their judgement. Along the way, there were times when I would get a version of the script just feel like, “No, this is wrong! I can’t believe it!” And Donna would say, “Listen, just trust me, we’re gonna get here at the end.” Honestly, every single thing that that woman has said from the first phone call has happened. She has made good on everything. And the reason why it’s happened in record time like this really has to do with her vision. So honestly, in a way, she’s sort of a hidden figure in this story.

KO: You’ve talked a lot about the problem with a set historical canon, how it leaves so many gaps. In history, we’re taught to segment—World War II, Civil Rights, Cold War—but I realized reading the first few chapters of your book that it’s all happening at the same time.

MLS: It’s all happening at the same time, just like now—you could talk about the War on Terror, globalization, Donald Trump, immigration. All of these things the same, all relating to each other.

KO: So how important is it to broaden people’s ideas of what canon is?

MLS: I think there are a couple of things: one is broadening that idea, and the other is making it really relevant. The thing that I love about narrative nonfiction—and I really love big, sweeping, narrative nonfiction—is taking it back to people. It’s not like things happen in a vacuum. People do things, and things happen to people. If you sit on the shoulder of the person and, as much as you can, look through their eyes, then the history is really much more interesting. And ultimately, we go to bed every night, we wake up, and then what we did yesterday is history. All of us contribute to history, and so I think when we show history in which ordinary people, even though they’re also extraordinary, have their lives intersect with these great sweeps? That’s just great storytelling. I love it, I really love it, and so for me, writing this book, that was what I wanted: a big, sweeping history about these women.

KO: The book, of course, takes a much broader view than the movie.

MLS: Yeah, I had to sort of let go of this idea that the movie was going to be the same as the book. That’s just not possible. It took a while for me to understand that a story told in one medium has to be altered and adapted for another medium. You can’t force people to sit through 30 years of history in two hours.

What I really appreciate is that the filmmakers captured the spirit of these women. And I feel like they really captured the banality of the segregation and the racism—that that’s how most people experience it. It’s not that a dog is biting you in the street; it’s that somebody looks at you and they make an assumption about you and treat you a certain way. The flip side of that is that progress always comes on in increments. We see these big moments; we see the moon landing, and when we think of the big moment, we see the astronauts—we have no idea that that this even is the result of work that started in Hampton, Virginia in 1917, when the National Advisory Committee for Aeronautics was first founded, when they first started working on airplanes. It took years of women and research.

And then you see Martin Luther King delivering his speech at the March on Washington. It is a galvanizing moment, and yet, you don’t see that for years before that, A. Philip Randolph and Charles Hamilton Houston, and all these other people, had been working for civil rights with lawsuits and so many different things. And that includes these women, who every day considered themselves to be fighting for more than just themselves, to have multiple missions at the same time.

KO: Now—this is the intersectionality question—is it a danger or an advantage to fixate so closely on specific facets of a person’s identity rather than the whole person?

MLS: A lot of the research for the book also necessitated reading a lot of academic research as well, contexts and history—and I am a big believer of intersectionality as a concept and a way of looking at things, but people themselves are whole. For me, one of the most important things was to show the full person with all of these identities inside instead of forcing audience to parse them, which I don’t want. I don’t believe in that.

One of the people I’ve so totally enjoyed getting to know in this process has been Janelle Monáe. Oh my God—every single interaction I have with her, I’m like, where did you come from, and how come there aren’t more of you? She is so transcendently human, she’s amazing! I’m so glad that she played Mary Jackson, because Mary Jackson was a great humanitarian spirit in that way; she really captured that.  So, I resist, a little bit, dividing the identities. I think you have to identify them, but I really believe they should be unified. We, as humans, are all of these things; we don’t have to split them off. I really wanted these women to be people who had all of these identities—which is what they were—and not for my sake, or my interest, parse them into something else. They didn’t exist that way.

KO: You grew up knowing that all of these avenues in science and technology were open to you, but a lot of girls today don’t necessarily have that. Do you think that the book and the movie will help?

MLS: I do, I do. I’m so glad that the book is getting such support—and there is a young readers’ edition! As much as people have supported the book (and I really want people to buy the book, obviously), a movie gives it a platform that is lightyears beyond that. There’s something about seeing a moving image and a real person bring a story to life. Even as I’m watching things in the movie that weren’t true in real life, there’s this part of me that started to believe them anyway.

KO: What were some of those things?

MLS: Well, the women knew each other, but they weren’t close friends. There were other people that they had close friendships with, but the three of them weren’t necessarily close in that way. Just details like that. Even NASA looked very glamorous in the film, when the real NASA is a lot more bureaucratic. But the point is that even I wound up conflating the reality with what happened, and that’s the power of movies. I’m a book person; I find transformation in books, but I think that when a lot of people see the movie, it’s going to make the point in a way that a book can’t for them. It’s going to be real, and it’s going to be transformative.

I’ve been floored by the response thus far. There was a vacuum, and this movie entered into the vacuum. We didn’t have any idea how strong it was. Now it’s like a wind tunnel, pulling all this energy out of seemingly nowhere. It belongs to so many people now. This story came from one place, and it’s gone somewhere else, and now it belongs to all of us—Pharrell, and Janelle, and everybody. I’m blown away, and happy . . . [Laughs]

KO: What are you working on next, other than your virtual museum?

MLS: This is part of a trilogy, as I’m conceiving of it. I found two other untold mid-century African American stories that have to do with the American dream and social mobility, so that’s what I’m working on next. But Hidden Figures is still what I’m working on as well.

Kristen O'Neal (@Kristen_ONeal) is an NYC-based writer who loves words more than just about anything (notable exceptions: crows, the divine, gentleness, her family). You can find more of her work in publications like Christianity Today, Relevant Magazine, and Zetetic. 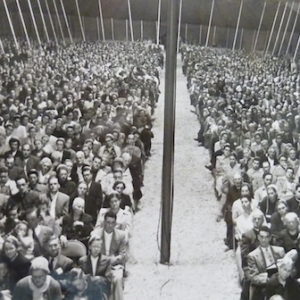 Melissa Range is the author, most recently, of Scriptorium, a collection that combines Appalachian colloquialisms with reanimated...
© LitHub
Back to top