Herman Melville: How to Promote Your Future Classic About Whales

Did People Even Talk About Books Before Twitter? As Told to Thomas Swick

I am writing to you with excellent news from Arrowhead: the imminent publication of my latest novel, Moby-Dick.

If you are reading this letter it is because we have crossed paths at some serendipitous point on this arduous journey through life. You may be a former classmate, or shipmate, or officemate; you may be a friend of one of my siblings or an associate of my beloved Hawthorne. Perchance, you attended the picnic Lizzie and I convened last summer here in the idyllic meadows of western Massachusetts. Surely, you are a well-educated and cultured citizen; ideally, you are one who retains a favorable impression of me and enjoys an influential position in New York or Boston literary circles.

Like my very popular Typee, Moby-Dick is a book of adventure. Readers who delighted in my previous work will undoubtedly hold this one close to their hearts. But it is infinitely more than an entertaining tale; it is an intoxicating brew of bravery and obsession, the psychological and the metaphysical; it shines illumination on the Sperm Whale (a noble creature that has been scarce represented in literature, not only here at home but also in the Old World) and enfolds in its pages enough symbolism to keep scholars occupied and students tormented for centuries to come. Call me delusional, but I heartily believe that Moby-Dick could become a classic—by which I mean a book with as many readers as people who feel guilt for not having read it—and your humble correspondent could be hailed—perhaps not in his lifetime, but in a more perspicacious future—as one of the greatest writers our callow nation has produced.

But for these wondrous feats to occur, I shall need your help.

You are all aware, I am certain, of the manifold difficulties facing writers in these querulous times. With my reputation already established, I consider myself one of the fortunate ones, but even we celebrated scribes can benefit from boosting, the damned eternal ballyhoo.

So begging your forbearance, I herewith enumerate a few of the ways you might, should you be so inclined, help the cause of Moby-Dick.

I. Mention my book wherever you may be… at church, at socials, at town meetings, in the public square. The more that people hear about my novel, the more they will be inspired to purchase it. If enough of you do this, you could create a mellifluous hum around the book, and talk of it would spread from village to village, from county to county, eventually, dreamily, from state to state until—O apt and glorious fate!—it traverses the oceans.

II. Write letters and articles in praise of the book. The great panoply of newspapers, journals, gazettes, reviews, bulletins, circulars, etc., has created a large population of editors in perpetual need of copy to fill their pages, and I can assure you that all but the most benighted and doltish among them will welcome sound and articulate musings of a literary nature. Your printed words would introduce my book to significant numbers of readers and that motley of blowhards who do not so much read books as preach to others what books they should read. There would be no need to supply the information that you know the author. And I beseech you not to be swayed by geography and thereby consider for submission solely those publications along the New England coast. I have not toiled these many years simply to provide the public with a provincial fishing story!

Those among you who are enamored of technology may also wish to explore the possibilities of the telegram. While it is much too early to make any predictions as to its future, for the nonce it impresses me as a tool more suited to private intercourse—and terse intercourse at that—than to broad public pronouncement.

III. Invent the book club. We are cursed to live in a land brimming with organizations and societies for every imaginable purpose and activity save the intelligent discussion of books. What is there to prevent a group of like-minded mortals from gathering weekly and sharing their thoughts on the books that they have been reading? Such an exchange would nourish the mind and constitute a far more salutary expenditure of one’s time than sitting by a fire and sewing another infernal quilt. Participants could take turns hosting these meetings in their homes, perhaps offering a table of victuals and ales. Then at the appointed hour, in an orderly and cordial proceeding, each member would declaim his impressions and opinions of the book that had been assigned the week previous. The first book could be Moby-Dick.

IV. Take a lesson from the tropics. The ways of endorsement, like those of love, are many. During my travels in the South Pacific, it came to my attention that the skin of many of the natives was etched with designs that were called “tattoos.” They were worn not solely as decoration; they had particular meanings attached to them. As strange as I found the custom, it initiated me into the idea of the human form as a kind of messaging service. Clearly, no civilized being would wish to deface his body in such a grotesque manner, but what if he carried on his person a sign—and walked with it among the multitudes? By necessity, the sign would contain a succinct phrase, something as clear and concise and providential as “READ MOBY-DICK!” To relieve the messenger of the burden of holding the sign for extended periods of time, it could be attached at his shoulders to another sign, emblazoned with the same message and covering his back. The two signs would be like thin slices of bread with the man an ambulant sausage between them. Men, and even women—faithful friends and dedicated admirers—could stroll with their “sandwich boards” through the crowds on Wall Street, and among the hawkers at Quincy Market, spreading the word, in the most unobtrusive and efficacious fashion, of an admittedly oddly titled book.

The above is but a modest sampler of my ideas. I pray that it will not induce you to think ill of me, or depreciate in any way your opinion of my novel, which comes out next Thursday.

With abiding faith in your infinite kindness,

Herman Melville is a Pittsfield, Massachusetts-based writer, who has written five novels; his first, Typee, was a bestseller. Moby-Dick is his most ambitious project yet. 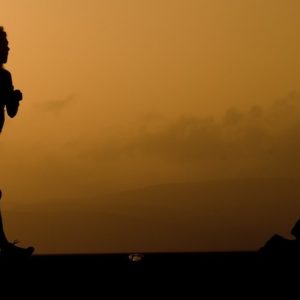 One of my favorite poems by Emily Dickinson, “I like to see it lap the Miles,” captures what I feel about long-distance...
© LitHub
Back to top