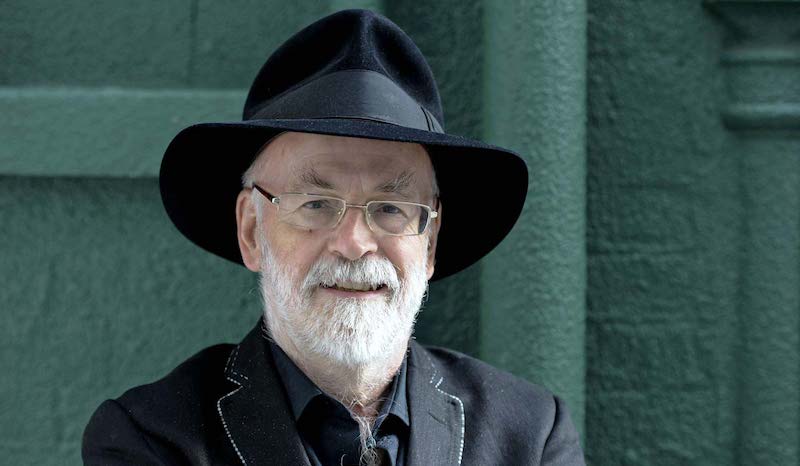 Here’s why Terry Pratchett’s daughter and Neil Gaiman are fighting with transphobes on Twitter.

All of a sudden, scores of people on Twitter are speculating about the late Terry Pratchett’s feelings on gender. This discourse hasn’t arisen spontaneously—it’s because Neil Gaiman weighed in on a transphobic Facebook post and angered anti-trans activists. Since then, Pratchett’s own daughter has gotten involved.

It all started on the 28th when author Laurie Penny posted about the intersection of anti-Semitism and transmisogyny, sharing (with horror) screenshots a conspiracy-minded Facebook post from a gender critical organization suggesting Jews are behind the “transgender agenda.” Neil Gaiman responded from his own Twitter account: “Not very surprising.”

Online “gender critical feminists” (anti-trans people) replied with criticism. One brought Gaiman’s Good Omens collaborator, Terry Pratchett, into it, claiming Pratchett was transphobic: “I thought the fact that you write good fantasy meant that you were acquainted with reality. After learning this about you, it seems however more likely like that was Pratchett’s contribution to your partnership.” (The account that tweeted this has now locked their profile.)

Another anti-trans account replied, “Honestly have no idea how anyone can read Pratchett, esp. the Witches, and think he didn’t know what ‘female’ is and means in the world.”

Honestly have no idea how anyone can read Pratchett, esp. the Witches, and think he didn’t know what ‘female’ is and means in the world.

This prompted many users to speculate on the political position implied by Pratchett’s writing. Many Pratchett fans replied to say that Pratchett’s books espoused compassion for others regardless of gender identity, often citing a particular passage from the Discworld series where a character misgenders someone and is corrected, as well as moments when villains police other characters’ gender expression.

Pratchett would despise your guts. pic.twitter.com/scLtb6zTM0

Gender is more or less optional.. Say no more… pic.twitter.com/wBRs8d3Viu

Finally, Rhianna Pratchett, Terry Pratchett’s daughter, weighed in: “This is horrifying. My father would most definitely not be a GC if he was still alive. Read. The. Books.”

This is horrifying. My father would most definitely not be a GC if he was still alive. Read. The. Books. https://t.co/iphrwjBMUk

(This still did not stop gender critical feminists.)

Terry was wise and Terry was kind. Terry understood that people were complicated, contradictory and, always people, and that people can and do change. As @rhipratchett says, he would have had no time for this nonsense. (See also: Equal Rites, Monstrous Regiment, Feet of Clay.) https://t.co/ex2gQcFgYp

Gaiman responded, noting that they missed the point of the story, and that simply depicting a viewpoint doesn’t mean an author agrees with said viewpoint. He also shared another tweet correcting Bessie Braddock about the ending ‘lesson’ of the story; Wanda is eventually accepted for who she is.

Yes, there were transphobic and TERFy characters in A Game of You. And there were other characters too, with very different opinions on the matter. With respect, I'm not sure you understand how literature works. https://t.co/iKGq4shU7g

The conversation was reignited when today, in The Times, Sarah Ditum wrote an article entitled, “You can’t hijack the dead for today’s battles,” with the subtitle, “It’s absurd for either trans activists or gender critical feminists to claim that Terry Pratchett would have supported them.” This article treated Pratchett like an enigma, neglecting Pratchett’s own daughter and those who knew him and met him saying Pratchett supported personal gender expression and was opposed to transphobia in all its forms. On Twitter, Ditum thanked Helen Lewis, author of the op-ed “A man can’t just say he has turned into a woman”, for assisting with the article.

Back in 2000, Pratchett, interviewed about transgender themes in his work, said, “The people I know who are gay (and one transgendered, I think—like the dwarfs, I don’t ask people what they’re not prepared to volunteer) are mostly within the SF/fantasy fandom which appears, at least, to be quite amiable about people’s sexuality so long as they don’t act like a jerk.”