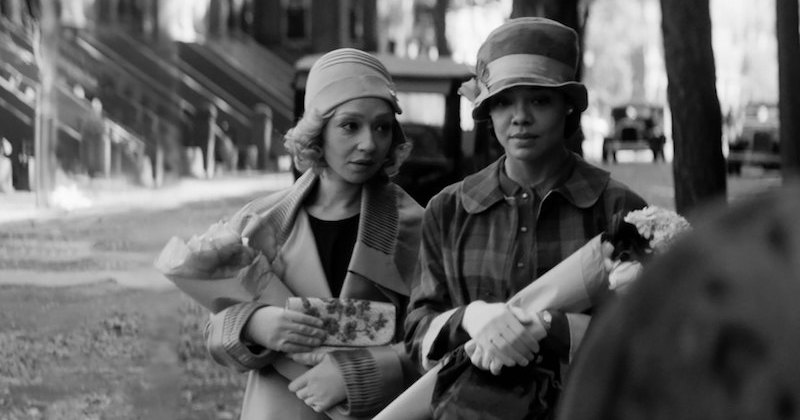 Here’s the official trailer for the film adaptation of Nella Larsen’s Passing.

At long last! We now have a full-length trailer for actor and director Rebecca Hall’s cinematic adaptation of Passing. The film, based on Nella Larsen’s 1929 novella of the same name, centers on two Black women, Irene Redfield (Tessa Thompson) and Clare Kendry (Ruth Negga), who are living in New York in the late 1920s. Both can “pass” as white but choose to live on opposing sides of the color line. One fateful summer, the childhood friends are reunited, changing the course of their lives forever.

Speaking at a Sundance-related virtual event on behalf of Variety, Hall discussed her personal connection to Larsen’s novel: “I don’t think that I really had language for passing. It was such a difficult area of conversation in my family . . . I don’t think I understood the truth of [passing] until I read the book. And then I had a context for it that made sense and slotted everything together in relation to all of the snippets of information I had about my family.” Hall’s mother is American opera singer Maria Ewing; her father was the English theater director Peter Hall.

At the same event, Thompson commented on Larsen’s impressive storytelling skills: “I felt that the book is so taut, and yet, it says so much, and it just really haunted me.” She also noted that it was a deliberate decision to shoot the film in black-and-white in order to eliminate the focus on complexion: “The truth is, if we hadn’t shot in that way, I probably wouldn’t be in this [movie] because I wouldn’t have been suited for what the role requires in a certain way.”

The trailer briefly shows Irene and Clare’s unexpected reunion, a flash of Irene’s doctor husband (Andre Holland), and Clare’s racist white husband John Bellew (Alexander Skarsgård). In one scene, Irene asks Bellew, “You dislike Negroes, Mr. Bellew?” He replies, “No, not at all. I hate them!” Clare laughs along with her husband, but the heavy look she exchanges with Irene speaks volumes. Near the end of the two-minute trailer, Irene asks Clare what she’d do if John discovered her true identity. For those who have read the novel, this seems to foreshadow the tragic ending.

The movie will hit select theaters in October and Netflix on November 10th.

Watch the trailer below: