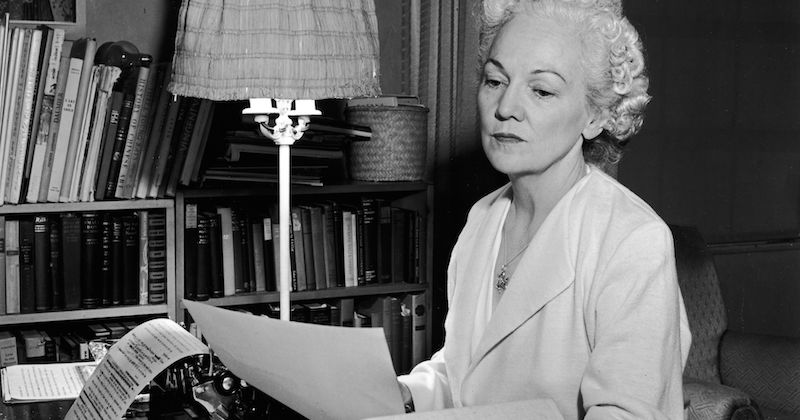 Katherine Anne Porter—the Pulitzer Prize- and National Book Award-winning author of Ship of Fools and Pale Horse, Pale Rider—was born 130 years ago today in Indian Creek, Texas, and should, by all expectations, have died less than twenty-eight years later alongside 675,000 of her countrymen in the Spanish flu pandemic of 1918.

Instead, Porter defied the Reaper and lived another 62 years, becoming in the process one of the most acclaimed American writers of the 20th century.

As this dispatch from the Hektoen International Journal of Medical Humanities details:

In the fall of 1918 Porter was a twenty-eight-year-old reporter for The Rocky Mountain News when she and a young army lieutenant both fell ill with the flu. Her death seemed imminent; the newspaper had her obituary set in type. Her fever was so severe that her hair turned white and fell out. The first time she tried to sit up after her illness she fell and broke her arm; she developed phlebitis in one leg and was told she would never walk again. Six months later her lungs were healthy, her arm and leg healed or were healing, and her hair had started growing back. The lieutenant died.

Pour one out for the young lieutenant, who, if we are to take our cues from the heavily-autobiographical novella Pale Horse, Pale Rider—the story of Miranda, a twenty-four-year-old reporter in love with Second Lieutenant Adam Barclay, an army engineer on leave awaiting orders to be shipped out to Europe—was Porter’s lover at the time. His story ended in a hospital bed in Denver, but Porter’s would stretch out across decades and continents. She spent time with leftist movements in 1920s Mexico, argued about race with Hermann Goering in 1930s Germany, married and divorced four different men, and was nominated three times for the Nobel Prize.

If you have seven minutes to spare (and, c’mon, you probably do right now), I would strongly recommend that you watch the first part of this 1973 clip from CUNY TV’s Day and Night program, in which an eighty-three-year-old Porter details her near-death experience.

It’s a powerful, lyrical evocation of a death-haunted time and a bullish refusal to go gentle into that good night.