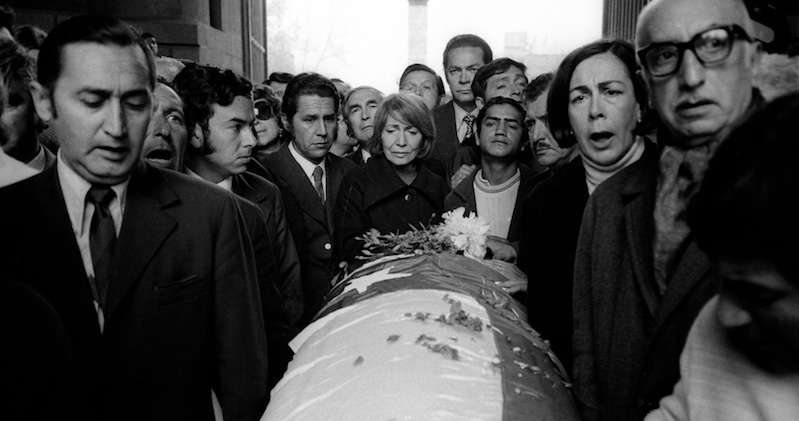 48 years ago this week Pablo Neruda—the Nobel Prize-winning writer-diplomat whom Gabriel García Márquez once called “the greatest poet of the 20th century in any language”—died at the age of 69.

A former senator for the Chilean Communist Party and close advisor to Chile’s socialist President Salvador Allende, Neruda was admitted to a Santiago hospital for prostate cancer treatment in September of 1973. Across town at the same time, Allende’s government was being overthrown in a coup d’état led by military strongman Augusto Pinochet. On September 23, suspicious that Pinochet had ordered a doctor to poison him, Neruda checked himself out of the Santa María Clinic and returned to his house on Isla Negra, where he died that same day.

Though Pinochet’s military junta had barred a state funeral on the grounds that the country was still under a state of siege and therefore large gatherings could not be permitted, thousands of grieving Chileans disobeyed the curfew and lined the streets to honor their national poet as his coffin, draped with the Chilean flag and covered with red and white carnations and camellias, was carried on foot across the city.

As the New York Times reported at the time:

A crowd of about 1,800 workers, writers and other intellectuals, mostly Communists and Socialists, sang the “Internationale” and cheered the Chilean Communist party and Communist youth movement in front of the mausoleum where the coffin of the Communist poet was placed.

A number of Communist and Socialist militants came out of hiding to attend the service and planned to disappear from view again afterward, according to left‐wing sources.

The military junta has arrested 30 of Dr. Allende’s closest aides and ministers and is holding them on an island in the Strait of Magellan in the far south. Thirty‐six other leftist leaders have been declared “wanted” by the military and thousands of left‐wing militants and sympathizers, including foreigners, have been arrested and are under interrogation.

Thus the leftist songs and cheers at the funeral today appeared to be a daring act of defiance of the junta.