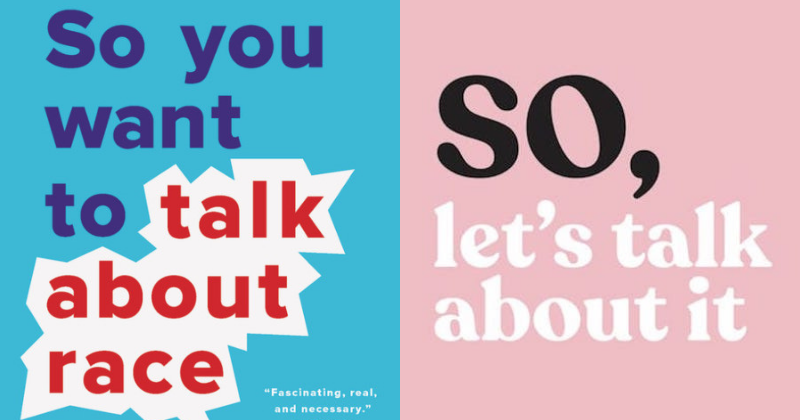 Here’s everything you need to know about the “So You Want to Talk About” Instagram controversy.

Last year’s summer of protests inspired a particular aesthetic of online activism. You’ve probably seen it on Instagram: a 10-image carousel of text and graphics that are probably set against a Canva-created backdrop. It’s what Vox writer Terry Nguyen calls “PowerPoint activism.” One of these accounts that skyrocketed to popularity was @soyouwanttotalkabout, which is run by New-York based marketing consultant Jessica Natale. The account has the familiar color palette of soothing pastels and muted neutrals and nearly three million followers. Posts include “What’s Happening Around the World,” “James Baldwin,” “Willful Ignorance,” and “History You Probably Didn’t Learn in School.” In just over a year, Natale’s Instagram earned enough attention to land a book deal from an imprint of Little, Brown.

Now, the account has made headlines (and not in a flattering way) for using a name extremely similar to Ijeoma Oluo’s 2018 bestseller So You Want to Talk About Race. In fact, the name was so similar that many people assumed that Oluo was managing the account.

On August 11th, Natale posted an apology to Oluo and said she would rename the page. (The handle is now @so.informed.) In an earlier August post, she also said that she would put a “pause” on the publication of her book. “I hear your feedback and am absorbing it as I reconsider my role and responsibilities in this situation.”

This is what we know about the situation.

Ijeoma Oluo published her book in 2018; Jessica Natale created her account in 2020.
So You Want to Talk About Race was first published on January 16, 2018, by Seal Press, which is a part of Hachette Book Group. Natale’s Instagram launched on February 11, 2020. She later explained that the account came out of her experience volunteering for Berne Sanders’s 2020 presidential campaign. “I promoted this page amongst fellow Bernie supporters and never expected to gain a following,” she wrote. The account began to get requests to explain other topics such as gun reform and wealth inequality, which then led to, basically, what the page is today.

A 2020 interview with Vox revealed that Natale went from 10,000 followers in early June to 1 million in August.

Following the murder of George Floyd in May 2020, Oluo’s book reentered the New York Times Best Seller list, along with other books deemed to be anti-racism resources.

Natale announced her book deal in April 2021 and also revealed her identity for the first time.
In April, Natale shared the title of her forthcoming book: So, Let’s Talk About It: A Toolkit for Unlearning. Voracious, the Little, Brown imprint that will publish the book, calls the account “synonymous with activism, accountability, and reliability, raising the awareness of millions on a daily basis for the causes and voices that most need to be heard.”

Up until that point, Natale, a white woman, had not shared her identity.

So You Want to Talk About Race, as Oluo pointed out in recent Instagram stories, was also published with Little, Brown, but under a different imprint. “I think this whole thing was really duplicitous and really shady,” Oluo said.

She added that multiple people contacted her to say they thought she’d been the one running the account, not Natale. “It has been really frustrating to see these celebrities, these huge pages, share the work of a white woman that is capitalizing off of the work of other people of color and other marginalized populations,” Oluo said.

She also spoke about the pitfalls of social media activism: “I am not interested in the meme-ification of anti-racist and social justice work . . . I am not interested in making this over-400-years complex system simple for white people to digest. I’m not trying to give you an easy way to feel like you have been doing something just by reading a post.”

The account got major criticism for posting an infographic that contained a racial slur.
On August 4th, Natale posted a slideshow about the history of immigration in the United States. In an apology post, she says that she worked with a historian on the post, who wrote it. Natale says her participation amounted to crafting a slide about ICE and designing the post. One of the slides featured the name of a government-named US deportation program, which included a slur. People contacted Natale about the inclusion of the slur and the lack of a trigger warning. The post has since been deleted.

Oluo said she contacted Natale in 2020.
Oluo said she DMed the account, which was still anonymous at that time, for more information.

She didn’t get a response. “My question about who’s behind the account [was] completely ignored,” Oluo said.

Although she didn’t directly respond, Natale added a disclaimer to her account that she wasn’t associated with Oluo’s book. The disclaimer remained there until Natale rebranded the account and changed the name in 2021.

The book may be on pause, but some could say that the damage has already been done.
In a follow-up Instagram story, Oluo said, “That subscriber count isn’t going away.”

She added, “I hope that from here on out those 2.8 million people who come for easy, quick, feel-good information to help them feel informed will actually be connected to the people doing real work.”

In a July 2020 Instagram post, author Eve Ewing showed first-hand how viral “racial justice explainers” can be helpful but also cause harm.

At this moment in time, you can still preorder Natale’s book on Amazon, which has a publication date of October 12, 2021.