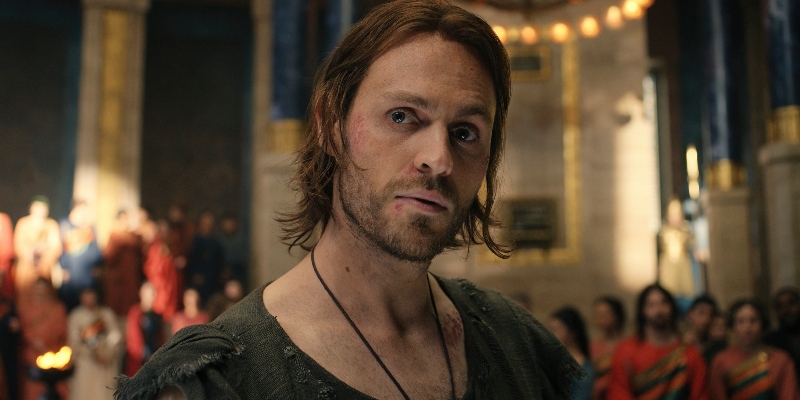 Here We Go Again: The Rings of Power Gives Us Yet Another Abdicated Royal

Artist/JRR Tolkien devotee Jenna Kass and TV critic/fantasy philistine Dylan Roth are a married couple who have joined forces to review the new original series The Lord of the Rings: The Rings of Power. Can this latest on-screen voyage to Middle-earth satisfy both a diehard with the wisdom of the Eldar and your average Sam, Pip, or Merry?

DYLAN: This week’s episode, “Adar,” follows three of the show’s ongoing plotlines, but the bulk of its 64 minutes is spent on the island of Númenor, a human nation that once allied with the elves. Today, however, Commander of the Elvish Guard Galadriel (Morfyyd Clark) and her accidental human companion Halbrand (Charlie Vickers) are not terribly welcome there, even after being rescued by the stalwart sea captain Elendil (Lloyd Owen). Jenna, I noticed you scribbling in your notebook a lot as Elendil was being introduced. I take it you have thoughts?

JENNA: Oh yes. This has cemented my feeling of “flattened” history from the first two episodes. Without getting into too much detail about what’s coming (in whatever form it’ll take), Elendil is from late in the Second Age. You might have recognized the name of his son, Isildur? That’s the guy who didn’t throw the Ring into Mount Doom in the prelude to Fellowship of the Ring.

While it makes sense that you can’t have a plot spanning thousands of years if you only want a couple of overlapping generations of humans to be embroiled in it alongside elves, this kind of compression is really hurting the sense of scale. We’re supposed to feel a weight of history at least on Galadriel’s shoulders, but that is an absolute non-starter when we’ve been given no chance to see anything developing.

We’re supposed to root for Halbran to pull himself together because the divine right of kings is canonically Good by the rules of high fantasy.

The First Age was one battle. Her quest for Sauron was one excursion. Here we are, a metaphorical minute to midnight, and I’ve been given nothing about her or her quest to care about. All of the emotional weight of what she’s gone through and is still going through is missing, and has apparently been instead given to Arondir (Ismael Cruz Córdova) and his merry band of more-or-less-nameless fellow-slaves.

DYLAN: Yeah, all the plot is happening in Númenor, but all the emotional gravity is being loaded haphazardly onto Arondir, who has been forced to dig tunnels and trenches for the orc servants of Adar—implied to be Sauron himself. It’s troubling to me that, despite how long this episode is (never mind how long it feels) there is not enough substance to justify the heavily scored slow-motion deaths of Arondir’s two elf companions. They did absolutely nothing for me.

There is a clear effort to echo the way that Peter Jackson’s films dramatize character deaths, but we don’t know these guys at all. Everything happening in the Southlands feels incredibly arch and hyperbolic, including some truly comical elf-fu that I’m pretty sure I was supposed to think was cool. Environmentalism is one of Tolkien’s favorite themes as I understand it, but the drama over chopping down an ancient tree to make way for the orc’s roads went from zero to a hundred in the blink of an eye.

It’s hard to do political intrigue in a world where evil is something you can measure, refine, and bake into a piece of jewelry.

JENNA: Agreed. I was kinda interested in his interactions with Bronwyn (who does not appear this week), but without her I truly do not care at all about him or his plotline. Especially when the third thread in this episode is the (mostly) understated but honestly pretty engaging Harfoot plot. Nori’s fixation on helping the Stranger (Daniel Weyman) has all but doomed her hobbled father (Dylan Smith) and whole family to being left behind as the community’s caravans make their way through the wilderness. This is more than just a shunning: these rosy-cheeked pastoral innocents can and do leave all stragglers to die. The ceremony highlighting this fact and remembering the dead and gone is actually quite affecting, sandwiched though it is between some gratingly broad hijinks.

The Stranger does help them out of this pickle, saying the word “friend” wonderingly and gazing at Nori with affection before pushing the caravan with his giant-scale strength. I must confess to irritation that we apparently have to have a backstory as to why Gandalf loves Hobbits so, but if we’re going to go there, this is not the worst way.

DYLAN: I have to admit that I engaged with very little in this episode, and I think that has to do with just how poorly these three subplots knit together. The second episode (written by Breaking Bad and Better Call Saul veteran Gennifer Hutchinson and directed by J.A. Bayona) managed to juggle four distintcly toned storylines with surprising ease. “Adar,” by comparison, might as well be three different shows. Two of the three share an interconnected plot, but no unifying themes or visual ideas. The Harfoot subplot is simply an event that happens to be occurring at the same time.

And, at the end of it all, we learn that this story, just like The Lord of the Rings, hinges on a man of royal blood who has abdicated the throne out of shame over a disgraced ancestor. That’s right, the roguish Halbrand is actually the rightful king of something or other, and we’re supposed to root for him to pull himself together and lead his people because the divine right of kings is canonically Good by the rules of high fantasy.

For all this episode hints at some shady history between the elves and the men of Númenor, I can’t really expect any interesting nuance out of it. It’s hard to do political intrigue in a world where evil is something you can measure, refine, and bake into a piece of jewelry.

JENNA: There is SO much more I could say (Míriel! I’m glad you have agency I guess but At What Cost?), but we do have five more episodes of this show and I shouldn’t let myself get too bogged down. See ya next week! 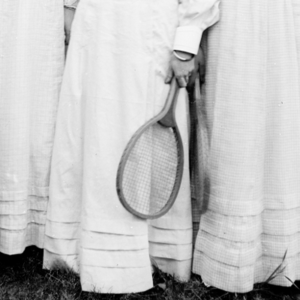 In 1919, twenty-year-old Frenchwoman Suzanne Lenglen made her Wimbledon debut in a shockingly skimpy ensemble: a V-neck dress...
© LitHub
Back to top