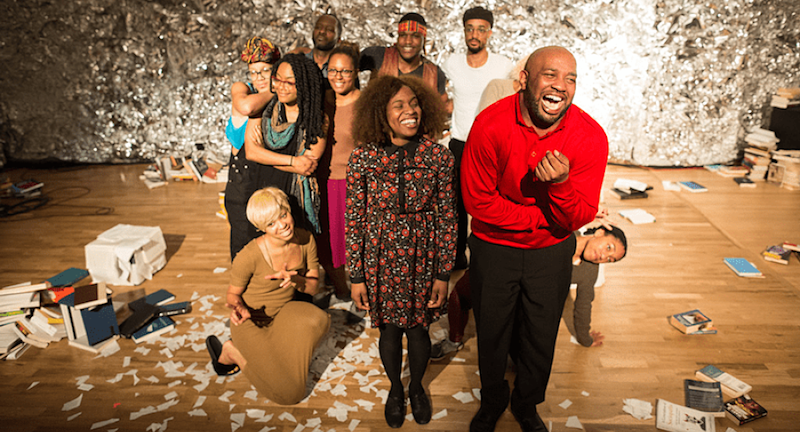 Here are the six winners of this year’s Helen Merrill Award for Playwriting.

This past week, the New York Community Trust announced the 2021 winners of its Helen Merrill Award for Playwriting, chosen by a committee of theater professionals. The award, one of the nation’s most significant prizes for playwrights, is named after the late theatrical agent Helen Merrill and intended to give recipients the time and financial security to write. Since 1999, the fund has given away $2.14 million to playwrights; previous winners have won Tonys and Pulitzers. This year, William Yellow Robe Jr. was presented with a posthumous lifetime award in recognition of his playwriting career and contributions to building the field, especially among Native theaters.

“This is an incredibly meaningful award for playwrights,” Salem Tsegaye, program officer for arts and culture at the New York Community Trust, told BroadwayWorld. “Receiving unexpected money is always helpful, but it’s the affirmation from colleagues in the field—to be seen, heard, and valued—that is most welcome, and that encourages awardees to continue to write for the stage, particularly in light of the challenges of the past year.”

Without further ado, here is this year’s list of winners:

Eboni Booth ($25,000 award)
Booth is a writer and actor from New York City. Booth’s play Paris had its premiere at the Atlantic Theater Company on January 21, 2020. The writer’s work has been developed with Ojai Playwrights Conference, Cape Cod Theater Project, WP Theater, Two River Theater, Clubbed Thumb, and Northern Stage. As an actress, Booth has appeared in productions at Playwrights Horizons, LCT3, Manhattan Theater Club, Ars Nova, WP Theater, Page 73, Soho Rep, and more. Booth is a graduate of the University of Vermont and Juilliard’s playwriting program, and will become a resident playwright at New Dramatists in the fall.

Ty Defoe ($25,000)
Defoe is from the Oneida and Ojibwe Nations. Defoe is a writer and interdisciplinary artist living in New York City. The two-spirit/Indigi-Queer writer’s theatrical work has been presented at Guthrie Theater, Oregon Shakespeare Festival, La MaMa Experimental Theater, Noor Theater, UtahPresents, First Stage Milwaukee, Native Voices at the Autry, Under the Radar at The Public Theater, New Victory Theater, and Chicago International Puppet Festival. Defoe is a Co-Founder of Indigenous Direction and All My Relations Collective. Defoe has also received a Johnathan Larson Award and Grammy Award for his work on Come to Me Great Mystery.

Lady Dane Figueroa Edidi ($25,000)
Edidi is a Black Nigerian, Cuban, Indigenous, American performance artist, author, teacher, choreographer, priestess, speech writer, playwright, writing coach, advocate, and healer. Edidi is also a two-time Helen Hayes Award nominee (the first trans woman of color to be nominated) and winner, which recognizes outstanding work produced on stages in the Washington, D.C., area. Edidi is the founder of the Inanna D Initiatives, which curates, produces, and cultivates events and initiatives that center and celebrate the work of transgender and gender nonconforming artists of color. In 2015, Edidi received an Emerging Leader Award for doing work with the D.C. trans community, and is the GLBT History Project’s 2018 recipient of the Mujeres en el Movimiento Arts Award.

Daaimah Mubashshir ($25,000)
Mubashshir is a playwright and theater maker. Her work has been commissioned by the Guthrie Theater and 3 Hole Press. Awards include a 2021 PlayCo Residency for Black Women Theatre Makers, 2020-2022 WP Theater Lab Fellowship, 2019-2022 Core Writer Fellowship (Playwrights Center, MN), a 2018 Audrey Residency (New Georges), a MacDowell Fellowship, and a Foundation of Contemporary Arts Emergency Grant. Mubashshir is a Playwright in Residence at Bard College and an alumna of the Fire This Time Festival.

Andrea Thome ($25,000)
Thome is a Chilean and Costa-Rican American playwright whose work navigates multiple languages and landscapes, often experimenting with theatrical collaboration. Recent works include Fandango for Butterflies (and Coyotes), a music-theater piece created with composer Sinuhé Padilla-Isunza and inspired by interviews with undocumented immigrants (En Garde Arts, 2020-2021), and the theatrical installation A Dozen Dreams, also commissioned by En Garde Arts. Thome co-created The Lark’s México-U.S. Playwright Exchange and the satire group Fulana, and was a New Dramatists resident playwright.

William S. Yellow Robe, Jr. ($40,000, lifetime award)
Yellow Robe was an Assiniboine playwright, director, poet, actor, writer, and educator from the Fort Peck Indian Reservation located in northeastern Montana. Yellow Robe was an adjunct faculty member in the English Department at the University of Maine and a faculty affiliate of the Creative Writing Department at the University of Montana. Yellow Robe’s plays are published in three volumes: Restless Spirits, from SUNY Press in 2020; Grandchildren of the Buffalo Soldiers: And Other Untold Stories, a collection of Yellow Robe’s full-length plays from UCLA Press (2009); and Where the Pavement Ends, a collection of the playwright’s one-act plays, published in 2001. Yellow Robe, who holds an honorary doctorate from the University of Montana, was a recipient of the First Nations Book Award for Drama, the Princess Grace Foundation Theater Fellowship, a Jerome Fellowship from the Minneapolis Playwright’s Center, a New England Theater Foundation Award for Excellence, a Rauschenberg Residency, and the Native American Achievers Award from the Smithsonian National Museum of the American Indian.

Congratulations to the artists recognized this year!