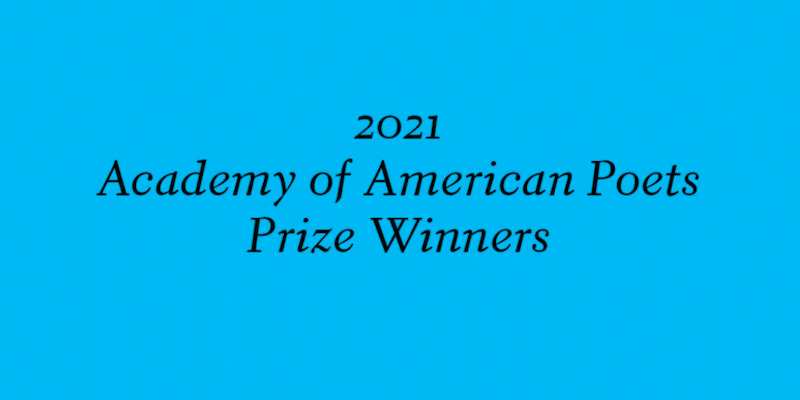 Here are the recipients of the 2021 American Poets Prizes.

Toi Derricotte has been awarded the Wallace Stevens Award

The Wallace Stevens Award, which comes with a $100,000 stipend, is given to a poet with an outstanding and proven mastery in poetry. Previous winners include Nikky Finney, Rita Dove, and Sonia Sanchez. Toi Derricotte is celebrated for works such as I: New & Selected Poems (a 2019 finalist for the National Book Award in Poetry), The Undertaker’s Daughter, and Tender (winner of the 1998 Paterson Poetry Prize). Alongside her writing, Derricotte co-founded the Cave Canem Foundation in 1996 with Cornelius Eady—an organization​​ dedicated to the fostering and artistic growth of African American poets.

“Toi Derricotte is the kind of master poet who maintains a restless relationship to poems. She moves between modes of memoir, essay, testimony and dream song. Her great regard for form is never greater than her regard for experiment and candor,” said current Chancellor of the Academy, Terrance Hayes, in a statement. “Her poems are engines of idiosyncratic black female witness. Her work is distinguished for its fusion of intimacy and intensity.”

Camille T. Dungy has been awarded the Academy of American Poets Fellowship

The fellowship honors distinguished poetic achievement, and provides the fellow with a stipend of $25,000 and a residency at the T.S. Eliot summer home in Gloucester, Massachusetts. Previous recipients include Gwendolyn Brooks, Robert Frost, and Tracy K. Smith. Dungy’s books include Trophic Cascade, Smith Blue (winner of the 2010 Crab Orchard Open Book Prize), and Suck on the Marrow.

Brenda Hillman, current Chancellor of the Academy, said of Dungy’s work: “whether she’s writing riveting lyrics, formally inventive sonnets, innovative environmental poetry or intimate aside from what she calls ‘the timeless space of the domestic,’ Camille Dungy has expanded poetry in the last few decades.” Hillman added, “her work gives new meaning to poetry of the self and the community by showing the interconnectedness of all beings.”

Recognized for her book The Age of Phillis, Jeffers has received the $25,000 Lenore Marshall Poetry Prize, reserved for the most outstanding book of poetry published in the US within the past year. Previous winners include Charles Wright, Adrienne Rich, and Kevin Young. Jeffers is also the author of the novel The Love Songs of W.E.B. Du Bois and four other poetry collections.

“In The Age of Phillis, Honorée Fanonne Jeffers has written a deft, highly researched, deeply engaging collection of lyric-narrative poems that will challenge the reader as it draws us into the age and life of Phillis Wheatley,” said judges Vievee Francis and Elise Paschen. They added, the book “will leave us with questions we must ask ourselves from who get to write poetry to how and why the treatment of Philis as a poet and black woman still resonates today.”

James Cagney has been awarded the James Laughlin Award

The James Laughlin award supports and recognizes a second collection of poetry forthcoming in the next year. Cagney has been recognized for Martian. His debut, Black Steel Magnolias In The Hour of Chaos Theory, won the PEN Oakland 2019 Josephine Miles Award.

“Martian makes new arguments for blackness, challenging and mystifying elemental understandings of our bodies in space,” said judges Mark Bibbins, Aimee Nezhukumatathil, and Ladan Osman. “James Cagney’s collection is remarkable because it refuses defense or explanation, instead favoring experimentation and exploration through intergalactic collapses of history.”

Aguasaco’s Cardenal en mi ventana con una máscara en el pico / Cardinal in My Window with a Mask on its Beak, translated by Jennifer Rathbun, has been recognized with the $1,000 Ambroggio Prize, which honors a book-length poetry manuscript originally written in Spanish and with an English translation. The manuscript will be published by the University of Arizona Press. Aguasaco has published seven books of poetry,  most recent including The New York City Subway Poems. Rathbun has translated over fourteen books of poetry, including those by Alberto Blanco, Minerva Margarita Villarreal, and Fernando Carrera.

About the manuscript, judge Rigoberto Gonzàlez, said: “This book reaches beyond surprising premises and literary inspirations to arrive at a place where the poet also finds wonder in everyday encounters and solace in the sobering knowledge that everything comes to an end, but not before dispelling its magic upon the world.”

The $1,000 prize honors published translations of poetry from any language. Headley is recognized for Beowulf: A New Translation. Her previous works include The Mere Wife, Magonia, and Aerie.

“Maria Dahvana Headley has satisfied the most deeply-felt and desired dream of any translator, to transfer into her language the words, feelings and cultural icons of a classic, lost tongue,” said judge Indran Amirthanayagam. “This Beowulf is born and eats from language at home in the world of the internet, robots, genes but maintains the alliterations and rhymes of traditional poetry, keeping the tradition alive and renewing it at the same time.”

Bohince has been recognized for her translation of Italian poet Corrado Govoni’s work. The prize, which comes with a $25,000 purse, honors translations into English of a significant work of modern Italian poetry. The fellowship subsequently allows an American translator to travel or study for significant works-in-progress. Bohince is the author of three collections of poetry and is widely recognized for her translations of Govoni.

“Corrado Govoni (1884-1965) is one of the most important 20th century Italian writers, though his work is not widely circulated in English,” wrote judges Moira Egan, Rebecca Falkoff, and Graziella Sidoli. “Paula Bohince is an accomplished poet whose skills are commensurate with the project of translating Govoni’s work. Her renditions, which read as true poems, not as literal translations, deploy unexpected sonic patterns and strange, radiant images deeply resonant with the senses.”

Recognized for his poem “Life As We Know It,” Williamson has won the $1,000 student poet prize. He is a current Master’s student in English for Creative Writing at Central Michigan University.

A huge congratulations to the recognized the poets!