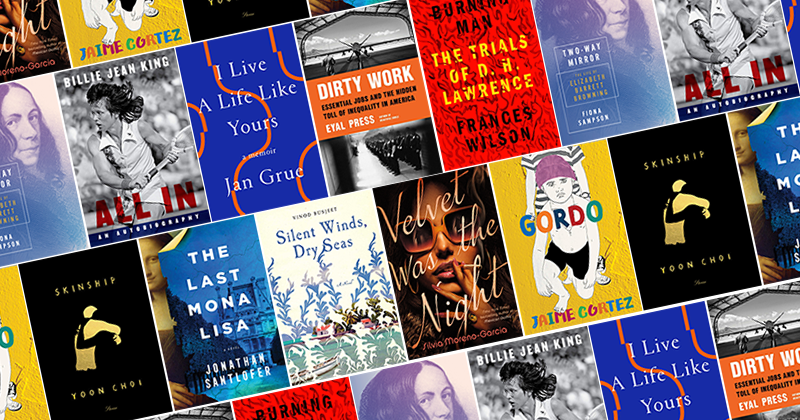 Silvia Moreno-Garcia’s Velvet Was the Night, Jaime Cortez’s Gordo, Billie Jean King’s All In, and Frances Wilson’s Burning Man all feature among the Best Reviewed Books of the Week.

1. Velvet Was the Night by Silvia Moreno-Garcia
(Del Rey)

“Throughout her career, the style-shifting novelist Silvia Moreno-Garcia has demonstrated a remarkable ability to employ the tropes of genre fiction while simultaneously subverting and decolonizing them … Velvet Was the Night her riveting new noir, is an adrenalized, darkly romantic journey set during Mexico’s Dirty War … Moreno-Garcia keeps us guessing … Moreno-Garcia always leaves her own indelible stamp on any seemingly familiar genre.”

“Steinbeck might not be the No. 1 literary pride of Watsonville for long. Enter Jaime Cortez, whose debut short story collection, Gordo, is set in and around the Pajaro Valley town. Cortez’s book is an unforgettable portrait of the working-class Mexican Americans who lived there in the 1970s—including the charming misfit title character, who narrates most of the stories … Cortez’s depiction of Gordo is both joyful and heartbreaking … both sweet and sorrowful, and it showcases Cortez’s ability to fully inhabit the voice of a young boy who knows he doesn’t fit in, but is only beginning to understand why … Cortez is a deeply compassionate writer; he obviously cares about his characters, though he doesn’t treat them with kid gloves. The people in this collection are painfully real, sometimes flawed, sometimes angelic, frequently both. Gordo is a lovely book that masterfully evokes 1970s California, but manages, nonetheless, to feel truly universal.”

“The impossibility of fully knowing someone else, or indeed oneself (the inevitable lacunae!), is an eternal theme of fiction, framed in infinite ways. The immigrant experience, in which multicultural characters necessarily navigate these gaps, is one such frame, and Yoon Choi’s beautiful debut story collection Skinship uses it to bring a rich and engaging new voice to contemporary American letters. With refreshing amplitude, patience, and (dare I say) wisdom, Choi’s stories explore the complexities of her characters’ diverse experiences … In each story, Choi evokes a world entire, an endeavor that extends beyond content into form.”

“Santlofer, an artist himself, knowledgeably guides the reader through the significant art treasures of Florence and Paris (where Perrone, oddly for an art historian, has never been), with plenty of action to goose the plot along lest the tone get too elevated. But his most striking achievement is capturing the divine and dangerous addiction that collecting art for art’s sake can become. Buyer and thief alike, beware.”

“Set primarily on the island nation of Mauritius, Busjeet’s inventive debut ping-pongs through time, combining poetic passages with linked tales to tell a story of family, politics, and yearning … Busjeet consistently dazzles with Vishnu’s narration, conveying the character’s developing maturity, creativity—several poems by the narrator cover his early years—and deep feeling for people even tangentially in his orbit. This showcases a remarkable and confident writer.”

“… the feeling you get reading Frances Wilson’s Burning Man … The flare of a match, a man on fire, raging, crackling, spitting, consuming everything and everyone around him. Wilson too is on form and on fire … I’m not totally convinced the Dante business works. Wilson’s voice is so appealing—confiding, intelligent, easy, amused—I would happily have read a straightforward blaze through the life, cradle to grave, basket to casket … This is a red-hot, propulsive book. The impression it leaves is of Lawrence not so much as a phoenix (his chosen personal emblem) rising from the flames, but of a moth coming too close to a candle and, singed and frantic, flying into and into and into the wick.”

“Sampson overturns old misogynist assumptions, establishing that it was Barrett Browning’s tremendous literary success that brought her and nascent poet Robert Browning together … Sampson sensitively elucidates how Barrett Browning’s unusual life shaped her imagination and social consciousness. As she tracks the creation and reception of each of her groundbreaking books, including Sonnets from the Portuguese, she astutely uses Barrett Browning’s revolutionary masterpiece, Aurora Leigh, a novel-in-verse about a woman poet claiming artistic and personal freedom to frame this gleaming two-way mirror reflecting Barrett Browning and her profound and extraordinary oeuvre.”

3. All In by Billie Jean King
(Knopf)

“She walks us through her remarkable life, which includes some of recent history’s most remarkable events … King’s instincts to shape seismic events in culture have set the table for (and in some cases, created) conversations about race, gender identity, sexuality and equity that are especially resonant now, and it’s hard not to read this book as a call to arms…But it’s also plenty personal … With the sport currently in turmoil over player unions, the lack of a viable domestic violence policy, a vociferous battle over press obligations and rumors of venture capital at the gates, ready (for better or worse) to buy it all up, King’s book arrives with the same exquisite timing that has defined her style of play as well as her life … It’s easy work to be a former champion, easier still to be a legend—after all, the job requirements are nothing beyond showing up. But it’s not easy to be an activist, and it’s certainly not easy to commit your life to pushing the world closer to how you want it to be. All Inreads as a manifesto, like Letters to a Young Poetwith a heavy dash of bell hooks. Billie Jean King is not done yet, but as she says here, ‘If you’re in the business of change, you have to be prepared to play the long game.’ Her book is a powerful rallying cry, in a life full of them, for how she hopes we play the game after she’s gone.”

4. I Live a Life Like Yours by Jan Grue
(FSG Originals)

“…a narrative that is compelling, unconventional and powerfully told … [Grue’s] genius becomes evident in his mastery of language and his profound success in the academic world … By his admission, Grue strives in his writing for what he calls ‘the condensed,’ choosing his words carefully and rendering these essays with language that is terse, direct and without garnish. He offers messages of wisdom that will resonate long after you’ve finished the memoir … Even allowing for its translation from Norwegian, this is serious stuff (if you’re looking for giggles, you are in the wrong section) … It must be said that Grue is tough company. This is a story of intense difficulty, which was surely difficult to write and is sometimes difficult to read. But it’s worth the investment. From behind the veil of disability, he shares valuable insight about the human condition. Do pay attention to that man behind the curtain. He has a lot to say.”

5. Dirty Work: Essential Jobs and the Hidden Toll of Inequality in America by Eyal Press
(Farrar, Straus and Giroux)

“… disturbing and necessary … describes with great empathy the lives of workers who do jobs that they themselves find morally horrifying … [Press] ushers us into a world of moral nuance and psychological complexity that behavioral science rarely captures … Press’s visceral descriptions of the treatment of mentally ill prisoners are agonizing to read … Press exhorts us not to look away from our dirty secrets but rather to take responsibility for the ‘dirty work’ being done to meet the sicker needs of our society. At the same time, perhaps unwittingly, he leaves some doubt as to whether a humane ‘us’ who will take such responsibility is attainable. Such doubt would go against the spirit of his book: Doubt is a corrosive force; skepticism about the moral capacities of human beings is self-fulfilling. Press would presumably accept that there are times when our faith in one another doesn’t come naturally; it must be willed. It’s a testament to his insight and vision that in spite of the ugliness to which he exposes us on almost every page, he still makes us want to set aside cynicism and pessimism and join him in finding ways to strengthen the moral bonds between us, however flawed we might be.”