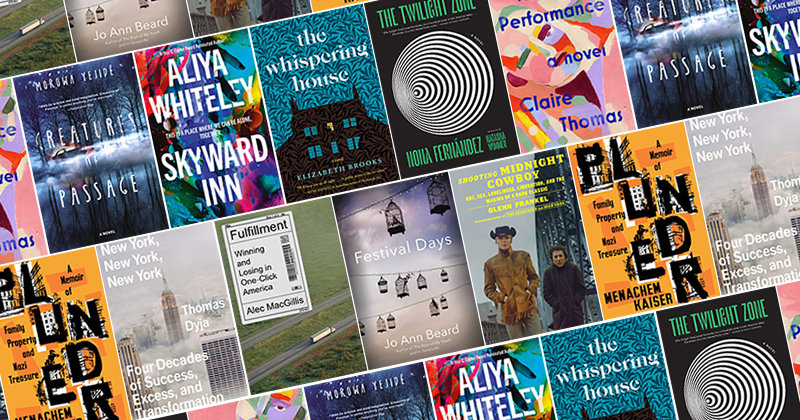 Read an excerpt from The Twilight Zone here

“Overcome with revulsion, I resolved to forget that name, Andrés Valenzuela. As if banishing him from memory could deny his ferocious persistence. Because here he is again, the protagonist of Nona Fernández’s novel The Twilight Zone, translated fluidly into English by Natasha Wimmer … Could anything original still be expressed on the subject? … In fact, The Twilight Zone is wildly innovative, a major contribution to literature, in Chile and beyond, that deals with trauma and its aftermath. Fernández, whose previous works of fiction have been admirably iconoclastic, belongs to a generation of prominent Chilean writers … In order to hold together the novel’s interlocking fragments, all those lives endlessly trapped in ‘dense, circular time,’ Fernández deploys a brilliant literary strategy. She conjures up samples of popular culture, primarily from the TV series The Twilight Zone, and turns them into portals to another dimension … It is up to us to risk entering that history and its blaze, to accompany her into that terrifying landscape and try to communicate with its ghosts.”

2. The Performance by Claire Thomas
(Riverhead)

“Thomas portrays three generations of women—anxious, resolute, uncertain—who emerge as indelible avatars for the human condition in times of crisis. Their regrets and recriminations, promises of improvement, and plans for atonement all play out within a finely wrought framework. Plumbing themes of intimacy, ambition, grief, and longing with a clarity that is both universal and precise, Thomas’ slim novel offers a rich source for book groups and all contemplative readers.”

“The novel’s setting of 1977 Anacostia, in the southeast quadrant of Washington, D.C., is magical and liquid, and so is author Morowa Yejidé’s storytelling style. Sequences flow between past, present and future, between concrete and fantastical, in a stream of vignettes … Subtle clues hint at how the plot fuses together, emerging amid enjoyable sketches of characters … So mesmerizing are Yejidé’s unhurried, lyrical chapters that it’s easy to forget the real conflicts, such as financial crises, racial tensions and substance abuse, looming in the background. This contemporary fairy tale’s grandeur and psychedelic wonderment undergird a serious warning, urging readers to make sense of the story’s message of family, justice, trauma and healing and to find a way toward a saner future.”

“… combines an intriguing, character-driven plot with great splashes of science fictional weirdness. The novel grips from the start, exploring with deceptive simplicity issues ranging from the difficulties of communicating with the people we love to colonisation on a planetary scale … I was reminded of the authors who first got me hooked on science fiction with their combination of deep humanity, brilliant storytelling and wild imagination: writers such as Theodore Sturgeon, Kate Wilhelm and Ursula Le Guin. Skyward Inn feels like an instant classic of the genre.”

“.. atmospheric and creepy, and as needy, nostalgic Freya is pulled deeper and deeper into its shadows, the reader’s worry for her grows—and, with it, the novel’s suspense. Freya is haunted by words she wishes she could take back, the sister she lost, the love that never was, the hopes for the future that she couldn’t attain; all of these materialize in the deep shadows and shifting portrait-eyes of Byrne Hall. Brooks has crafted a slow-simmering, psychological, gothic novel about grief and longing.”

“…a wide-ranging, impressionistic tour of a nation whose citizens’ existence has become intertwined with a single corporation… As MacGillis notes, understanding how a single corporation became so widely and deeply entrenched requires historical perspective … What MacGillis feels is underappreciated is the geographical remapping of wealth—and, with it, power—that the transformation has brought about … MacGillis describes how, while rich corporations and their top employees have settled in a small number of wealthy coastal cities, the rest of the American landscape has been leached of opportunities … These numbers document a stark divergence, but they don’t capture its human dimensions. That is MacGillis’s goal, as he explores what the erosion of power and possibility means for regular people … Addressing the regional imbalances in America would be an enormous undertaking, and MacGillis doesn’t presume to offer prescriptions. But his book suggests one very big place to start: Serious workplace reforms would affect hundreds of thousands of workers, as well as help reshape the broader labor landscape.”

“In a world increasingly lived online, there is a grounding comfort to Jo Ann Beard’s refreshingly analog voice. This isn’t to say her writing isn’t relevant or that her language doesn’t wow. Beard’s power comes from phrasings and insights that aren’t just screaming for likes. Few writers are so wise and self-effacing and emotionally honest all in one breath… Over the course of nine beguiling pieces—which seamlessly meld observation and imagination—she effects an intimacy that makes us want to sit on the rug and listen … If obsession is a writer’s fuel, Beard is powered by the ‘beautiful and stupid’ acts of hanging on and letting go. Every line builds thematic texture, instructing us on how to read, and what to take from it all … Beard imagines her way into anything…If her essays read like stories that’s because she is less concerned with cold accounts, and drawn more to detail and interiority and the choices people do and don’t make … Invention allows her to excavate a deeper truth … Beard navigates the darkness with her signature wit.”

“In this outstanding work…Pulitzer Prize–winning journalist Frankel covers every facet of the film’s creation … In a canny move, Frankel places the film in historical context, detailing major world events at the time of the shoot … Interviews with the film’s surviving principals add immediacy, and descriptions of small production details enhance the book’s power … A rare cinema book that is as mesmerizing as its subject.”

“Menachem Kaiser’s Plunder: A Memoir of Family Property and Nazi Treasure tells a twisting and reverberant and consistently enthralling story. It’s a weird story that gets weirder … Kaiser is a reflective man on the page, with a lively mind. He dwells on the moral seesaw he finds himself on … Plunderhas many stories to tell … many moods and registers. It acquires moral gravity. It pays tender and respectful attention to forgotten lives. It is also alert to melancholic forms of comedy. Tonally I was reminded at times of Jonathan Safran Foer’s excellent first novel, Everything Is Illuminated… Traveling on a private road, closer to the ground, and at a slower pace, [Kaiser’s] walk turns up details that are fresh, unexpected and significant. His perceptions are sharp. We partake of his curiosity.”