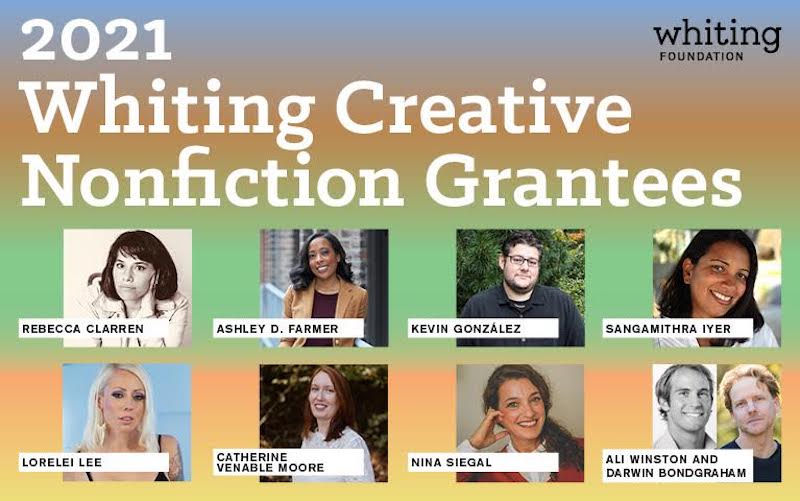 Today, the Whiting Foundation announced this year’s recipients of the $40,000 Whiting Creative Nonfiction Grant, which supports “original, ambitious projects that bring writing to the highest possible standard,” and which is intended to bolster writers who are already knee-deep in deeply researched, multi-year nonfiction projects. Previous winners include Sarah M. Broom, Kristen Radtke, and Jess Row.

“Great books ask questions that are not easily answered, and these outstanding authors bolster powerful narrative skills with deep research to help us see the present in our past, and the future in our present,” said Courtney Hodell, director of literary programs, in a press release.

Here are this year’s grantees, along with brief descriptions of their works in progress and commentary from the Whiting Foundation judges.

An American Inheritance investigates the parallel histories of the author’s family, who fled anti-Semitic pogroms in Russia in the early 20th century to settle on land in South Dakota given to them by the U.S. government, and the Lakota who were then forced off that land, examining what happens when the oppressed become the oppressors.

From the judges: “A wide, deep, and ambitious book, one that peers inward at the heart of the country and its history of genocide at the same time it looks across the ocean. This is a brilliantly conceived family history, one that places questions of responsibility and atonement at the center of the conversation about America’s political future. Striking a balance among the overlapping issues of indigenous rights, inherited responsibility, retribution, and healing is a complex task, but Rebecca Clarren approaches her project with candor and clarity.”

An essential book: this is a biography of not only an extraordinary and understudied figure but an entire movement. Queen Mother Audley Moore gives the fraught, feminized, and often unglamorous work of organizing its due, and it contributes to our working knowledge of the history of civil rights, filling in the gaps throughout the twentieth century. Farmer’s groundbreaking and tenacious research allows her to build what other writers claimed was impossible: a full-length biography of the mother of modern Black nationalism.

From the judges: “An essential book: this is a biography of not only an extraordinary and understudied figure but an entire movement. Queen Mother Audley Moore gives the fraught, feminized, and often unglamorous work of organizing its due, and it contributes to our working knowledge of the history of civil rights, filling in the gaps across the twentieth century. Farmer’s groundbreaking and tenacious research allows her to build what other writers claimed was impossible: a full-length biography of the mother of modern Black nationalism.”

Juracán is a memoir about growing up in Puerto Rico in the 80s and 90s, of immigrating to the United States in search of opportunities not available on the island, and of being caught between languages and cultures. At the heart of the book is the search for the author’s father, distant in youth, who during Hurricane María became trapped in his apartment without running water or electricity until González was able to return to the island to rescue him. Juracán—hurricane—is the name the native Taíno Indians bestowed upon their god of chaos and destruction, who would descend on the island to air his wrath by way of torrential storms. This mythical figure serves as an overarching metaphor as the book examines Puerto Rico’s colonial relationship with the United States.

From the judges: “Artful and unique, Juracán is a timely salvo directed at a blind spot in mainstream American consciousness. González’s voice grabs you by the collar, as funny and combative in its critique of imperialism as it is sympathetic and wise in its portraits of the author’s family. Formally experimental but eminently readable, this mashup of memoir and cultural history is a joy and an education, a book that could become a classic.”

Governing Bodies is a lyrical manifesto and ethical reckoning of the ways earthly bodies are controlled by and liberated from colonialism, capitalism, and speciesism. The book intertwines the story of the author’s paternal grandfather, who quit his job as a civil engineer in colonial Burma to become a water diviner and join the Freedom Movement in India, with the author’s own journeys as a civil engineer, writer, and activist. It foregrounds the rights of animals, the mythology and meanders of rivers, and the strength and vulnerability of the earth. Governing Bodies inhabits liminal spaces and acts as a catena, linking wide-ranging subjects from personal and planetary grief to invisible inheritances, and asks what it means to embody nonviolence.

From the judges: “This project brims with loveliness; Iyer writes about family and ecology and the legacy of colonialism with enduring insight and gentle, heartbreaking passion. She delivers a subtle, meditative exploration on grief and nonviolence, an international and intergenerational voyage through shared histories and a reckoning with what we owe to each other and the natural world.”

Lorelei Lee, Anything of Value
Memoir/Cultural reportage, Forthcoming from HarperCollins

Organizer and sex worker Lee’s Anything of Value blends memoir, history, and critical theory to reevaluate our cultural understanding of sex work and its intersections with class, race, gender, labor, bodily integrity, and the law – and ultimately argues for sex work decriminalization.

From the judges: “Armed with personal experience, activist chops, and a law degree, Lorelei Lee is a triple threat to public misperceptions of sex work. Their work maps the complicated spaces between sex workers and “civilians,” dissolving stigma and well-worn stereotypes, insisting powerfully on the dignity of the individual. Anything of Value dismisses old tropes that sort sex workers into two categories—exploited and empowered—and opens the door onto a more rational, complex, and humane conversation.”

Disunion is a history of the West Virginia Mine Wars, one of the most dramatic struggles for civil rights that this country has known, but also one of the nation’s most obscure. In recounting the stories of three major strikes leading up to the Battle of Blair Mountain in 1921—commonly referred to as the largest armed insurrection in U.S. history since the Civil War—Moore brings to life the miners and their families, many of them immigrant or Black, and the tenuous alliances they forged as they repeatedly went up against the powerful combination of corporations that exerted autocratic power over their lives.

From the judges: “A gorgeously written, meticulously researched account of a critical episode of labor history in the United States, Disunion tells a century-old story of solidarity and the struggle that united Black, white, and immigrant miners against wealthy industrialists. Reading it, one can almost feel the tension in the air of the union meetings, the hopes and disappointments of its members. Moore’s characters could have stepped out of a Sherwood Anderson story. Her passion for this moment in history opens up a discussion vital to contemporary American life.”

The Diary Keepers was born out of a New York Times article, “The Lost Diaries of War,” which explored a trove of more than 2,000 diaries collected by the NIOD Institute for War, Holocaust and Genocide Studies in Amsterdam. The author has chosen seven diaries from the collection, which she weaves together to tell the story of the war from varying perspectives, like a multi-character novel. They include narratives of Jews in hiding and imprisoned, a grocery store owner who became a member of the resistance, a young, unaffiliated factory worker in Amsterdam, and a police officer and Nazi collaborator who ran a special unit to hunt Jews. Taken together, their stories create a fascinating mosaic of life in the Netherlands in the five harrowing years from Germany’s invasion of the Netherlands to the end of occupation.

From the judges: “Braiding together reflections from seven ordinary, yet utterly fascinating, diary keepers during the Nazi occupation of the Netherlands, this kaleidoscopic work of history is intensified by the author’s sensitive contextualization. The entries are haunting and intimate; some are burned into the brain, such as a diarist taking a train to eat cherries in the countryside while another train deports Jews to Germany. Siegal transforms the drudgery of archival sifting into an act of grace. Potentially explosive, this book could lead to the Dutch reexamining themselves and Europe reassessing the Dutch.”

Ali Winston and Darwin BondGraham, The Riders Come Out at Night: The Failure to End Police Brutality and Corruption in Oakland
History, Forthcoming from Atria Books

The Riders Come Out at Night profiles the Oakland Police Department, the law enforcement agency under the longest-running federal reform program in the United States. The authors, prize-winning independent journalists, have followed the story for 13 years. Through an examination of the department’s past and present, the book examines the evolution of contemporary policing in America and delves into whether the profession, in its current shape, can be reformed.

From the judges: “As thrilling as the best noir fiction, The Riders Come Out at Night lays bare the horrors of police brutality with careful and unflinching courage. It stands to inform one of America’s most urgent debates, providing insight into the culture of a police department in freefall. The project is marked by the authors’ eye for detail, ear for a galvanizing story, and instinct for the heart of a question. Their thirteen years of tireless reporting will culminate in an essential book.”