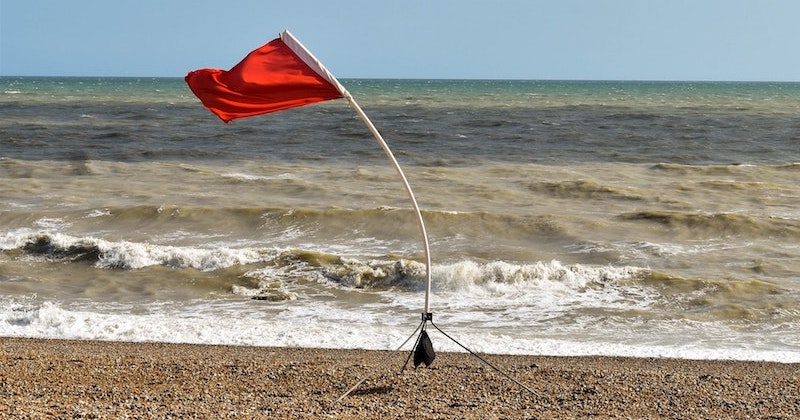 Here are some red flags for women of color who work in publishing.

So, by now I’m sure you’ve noticed the red flags flooding your social media feeds. And if you haven’t, then you probably are better off than the rest of us, who are perpetually Very Online and need to, I don’t know, go outside and touch some grass for the sake of our mental health.

Anyway, this Twitter-born meme seems to have taken hold because of its ability to be painfully universal and simultaneously specific to certain cultural demographics. The meme can be applied to broad subjects such as relationship and dating woes (Outwardly normal guy you met on Tinder: “All my ex-girlfriends are crazy. Haha.” THAT’S A RED FLAG!) or pop culture (Joe Goldberg from You: “Sometimes, we do bad things for the people we love.” Seems like the mantra of a hopeless romantic but is actually the rationalization of an obsessive psychopath). The beauty of this meme is that when you peel back the layer of sarcasm, you’re hit with some very real truths. Like the proliferation of mental health memes, the red flag meme can serve as a coping mechanism. Whether that coping mechanism is healthy or counterintuitive is up for debate.

For women of color who work in publishing, coping mechanisms are vital if you want to maintain your sanity. Don’t let the promises of corporate publishing houses and gatekeepers fool you—diversity and equity are no closer to being achieved now than they were a decade ago. Take, for example, legacy publication The New Yorker, which was the talk of Lit and Media Twitter when editor Erin Overbey exposed the glaring lack of representation in its bylines. And in terms of the publishing industry, well, it’s still looking pretty bleak. According to Lee & Low’s most recent Diversity Baseline Survey, “76 percent of publishing staff, review journal staff, and literary agents are White.” The numbers don’t lie. In December of 2020, the New York Times released an op-ed about the state of the publishing landscape, which again emphasized the racial homogeneity of the industry. I guess that “summer of racial reckoning” didn’t really move the needle, to the surprise of absolutely no person of color.

So what’s a non-white woman to do when attempting to make a career in a minefield of microaggressions and outright racism? Finding a trusted community is one solution. Creating firm boundaries is certainly another proactive response. Prioritizing one’s mental health is another (Prozac Girl Gang, unite!) And sometimes, all you can do is laugh through the tears.

Here are some red flags for all my women of color working in the publishing world, which may or may not be mined from my own experiences. Enjoy! (And then please do something to expunge the toxicity of having to be in this environment because stress is real and not to sound cliché, but the body remembers.)

During a staff-wide meeting: “Would you mind leading our next diversity and inclusion meeting? We’ve noticed how passionate you are about diversity!” 🚩🚩🚩🚩🚩🚩🚩🚩🚩🚩🚩

Getting passed over for a raise or promotion for the umpteenth time despite excellent performance reviews: “You know, we really appreciate your enthusiasm but you just don’t have enough experience.” 🚩🚩🚩🚩🚩🚩🚩🚩🚩🚩🚩🚩🚩🚩🚩

The older white person who thinks Cancel Culture is real: “Diverse books shouldn’t get an extra push just because they’re diverse. The best books will always rise to the top.” 🚩🚩🚩🚩🚩🚩🚩🚩🚩🚩🚩🚩🚩🚩🚩

The manager who barely knows your name and constantly calls you by the name of another person of color: “You’re so articulate!” 🚩🚩🚩🚩🚩🚩🚩🚩🚩🚩🚩🚩🚩🚩🚩