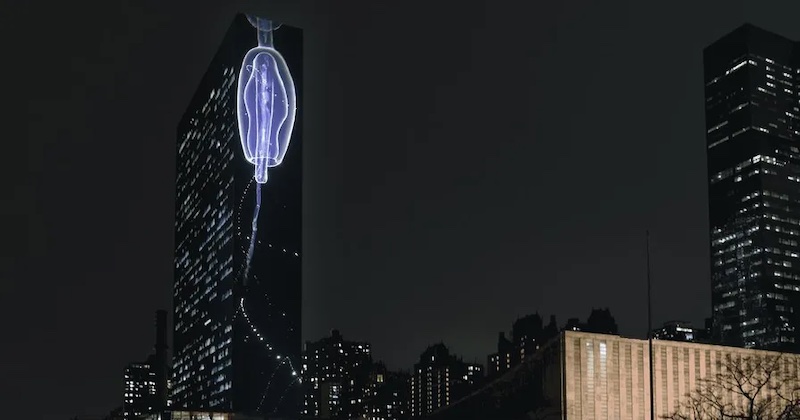 Helen Scales explains the enormous sea creature that was projected on the UN building last week.

If you live in New York City, you may have noticed the hubbub around the General Assembly of the United Nations, which began last week and runs through tomorrow. Considering that it was also UN Climate Week, you may also have noticed the video of a strange 500ft submarine creature that was projected onto the north façade of the UN building last week. The video, which is called Vertical Migration, was produced by Danish arts collective Superflex, and features an extraordinary and little-known deep sea creature known as a siphonophore.

“It’s an assembly where world leaders meet and decide the future of the planet,” Rasmus Nielsen, one of the three founders of Superflex, told The New York Times. “It seems that they have forgotten to invite someone. It’s like a birthday party and you forget to invite an uncle.” Superflex describes the filmwork as “inviting the first non-human delegation directly to the United Nations.”

We asked Helen Scales, author of The Brilliant Abyss about the creature. Here’s what she told us:

The glassy, glowing animal gracing the side of the United Nations Assembly this week normally goes unseen in the deep ocean. It’s a siphonophore, a close cousin of jellyfish and corals, although quite unique in its life form. This is not one animal but a colony of many, known as zooids, all of them individuals that could in theory live by themselves but they come together to cooperate as one body. There’s a couple of hundred known species and plenty more yet to be found and identified, and most of them inhabit immense depths. Many occupy the twilight zone, between around 600 and 3000 feet down, the region of the sea where sunlight is ebbing away to an intense, inky blue. With their delicate, gelatinous bodies, siphonophores are notoriously difficult to study. They fall apart in sampling nets. But new imaging technologies and remote operated cameras are showing just how important they are in deep ecosystems. They’re voracious hunters, some of them hundreds of feet long. And they take part in the biggest migration on earth. At dusk each night, a parade of animals rise up from the twilight zone to feed at the shallow seas. Before sunrise they sink back down. It’s a glorious, hidden procession and one that’s critical for the health of the entire planet. The rise and fall of siphonophores and other twilight zone inhabitants together pull down between 2 and 6 billion tons of carbon each year, out of the atmosphere and into the deep.

Here’s how it appeared last week in NYC:

And here’s a trailer for the filmwork: