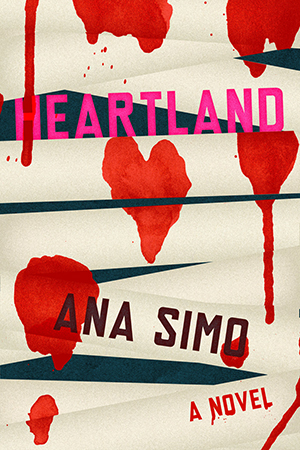 The following is from Ana Simo’s debut novel, Heartland. In a dystopian future, a writer's girlfriend is stolen away by SoHo art dealer Mercy McCabe. The narrator plans to kill McCabe, until she delivers news about an old friend. Ana Simo is the author of a dozen plays, a short feature film, and co-founder of Dyke TV.

Killing a pig is easy. Pigs are like fat babies. Hot-blooded, squirmy, squealing, sly, and utterly useless unless you like their meat. Feeding them both to sharks, as the sublime Montevidean advised two centuries ago, would have raised humanity a tiny bit closer to the angels. It’s physically harder to kill a pig or a gargantuan baby than to twist the neck of a goose, but it’s morally easier. Cuteness will not stop you if, like me, you do not confuse sentimentality with morality. You will put on your butcher’s apron and get to work.

McCabe used to be an easy kill. Not anymore. She was now closer to a bird than a mammal, except for her wolf-like appetite. She was still gaunt despite the prodigious amounts of meat she ate, but a thin, steely layer of muscle and tendons now covered her bones. You wouldn’t notice it unless you touched her, as I had while she slept under the willow tree. It was now mid-October. The cool air had chased away the gnats and the mosquitoes. Dust had vanished from the streets of Elmira, resplendent in the lingering Indian summer. The townspeople had begun wearing bright red jackets and hats, so that hunters would not mistake them for deer.

After her passionate account of the migrating birds, McCabe had become silent and elusive again. Not unfriendly, though. She smiled at me the few times we crossed paths in the garden, a tentative, embarrassed little smile. She seemed to spend her days pacing the property line, deliberately, like a prospector counting her footsteps, with her eyes always fixed on the ground. I did not have an uninterrupted view of her journey, even with the Judge’s binoculars. McCabe would disappear behind a copse and reappear an hour or two later half a mile to the left. She could have gone to town and back. Yet I was sure that she hadn’t. It was a deduction grounded on an objective fact. I observed that every day McCabe would begin her walk at one cardinal point and that every two hours on the dot she would appear at the next. The entry point and the walk itself would proceed clockwise for four days, and counterclockwise for another four. Someone sneaking to town wouldn’t trap herself in such ironclad routine.

The re-education and killing scenarios I had imagined for her predecessor did not quite fit this peculiar automaton either physically, logistically, or, worst of all, morally. Justification and execution procedure alike had to be retooled. I resented the bony creature for making me redo my homework, and tried to whip up resentment into murderous motivation, but that was too ridiculous, even for me. I began to take long baths before going to bed, seeking illumination in the water. Watching the hypnotic filling of the tub, I wondered if it would be painless to take sleeping pills and drown.

“My eyes moistened, I had lost my good, old McCabe, my pal in reverse, the one who had been with me all these years, the one that I personally had to kill.”

In that state of mind, I stood one day at dusk on the edge of the Judge’s property, overlooking the river one hundred feet below. I stood there every day to watch the sun set beyond Shangri-La. I do not care for sunsets, but I liked staring at Shangri-La, which at that hour looked like a bunch of tea leaves at the bottom of a dirty teacup. I had a feeling someone was watching me. When I turned around, McCabe was there. I had not heard her approach, even though the ground was already thick with crunchy red and yellow leaves.

“They tried to kill him,” she said, flatly. “Who?” I said, turning back toward the river and Shangri-La to hide my face from her. She did not immediately answer, but I already knew. Out of the corner of my eye I noticed her lips moving in silence, as if trying to find the right words. “The National Security Advisor,” she finally said, one slow word at a time. My mouth dried out. I could not speak. “A car bomb. Crossing the Bosphorus,” she said; and then, mistaking my horror at her intrusion for concern: “But he’s unharmed.” We were now facing each other. I had trouble breathing. My knees gave out. On the ground, I covered up by pretending to examine a weed. How had she found out that I knew him? Was she spying on me? At least she had used his official title, instead of his more intimate name. I had nothing to do with Rafael Cohen. Since I left Elmira, thirty years ago, aboard the last refugee bus to make it out of the starving heartland, I had hardly thought about him. I was already erasing Elmira as the bus took off, and I waved back to my parents, grandmother, and godparents Genoveva and Ezequiel Cohen, all of whom preferred starvation at home to begging in the city. Rafael always sent me Christmas cards, but we had met again only twice, at my parents’ funerals. The last time I had seen him was seven years ago, at my mother’s wake, right before he published the essay that would propel him from academia to the West Wing. He did not seem to resent that I did not reciprocate with his burials: when his mother and then his father had died I just sent Hallmark condolences. Still, Rafael Cohen belonged to me, to my most secret memories, not to McCabe.

“I heard it on the radio,” McCabe said, as if reading my mind. It was as simple as that. No spying, no mental eavesdropping, no conspiracy: just a regurgitation of the radio news. Like old McCabe used to do. How she would have riffed on this one, from appetizer through dessert. I suddenly missed old McCabe, missed her bombastic speeches, her heft, her booming voice, her unshakeable certainty that she was always right, and so rich she could always get her way. My eyes moistened, I had lost my good, old McCabe, my pal in reverse, the one who had been with me all these years, the one that I personally had to kill. Someone else had beaten me to it. I suddenly hated the new McCabe I had in front of me, shifting instantly from neutral to two-hundred and fifty miles per hour of murderous hatred. The McCabe before my eyes, the gaunt impostor, the body snatcher, the miserable mutant, must have noticed, because she said, “I’m sorry if I upset you. It’s a slaughterhouse out there,” and she gestured vaguely toward the flaming horizon. I stood up, wanting to hit her. She looked at me with curiosity. My white-knuckled fists seemed to hold a particular fascination for her. She knew, and she was going to let me do it. I had what I wanted, the Nuremberg trial, from beginning to end, in just one second, not through any elaborate plan on my part, but nonetheless happening right here, and now. I could push her off the edge. I should have. For what old McCabe and Elmira had done to me. And for something that now seemed even more monstrous, for what she had done to old McCabe. We were frozen for a few seconds, silent-movie style: me with my fist raised, and her looking at me sweetly, like the girl in Broken Blossoms gazes at the Chinaman who has just saved her. Then I turned and ran away.

From Heartland. Used with permission of Restless Books. Copyright © 2018 by Ana Simo.

The Conversation I've Been Dreading: Ijeoma Oluo Talks About Race with Her Mom 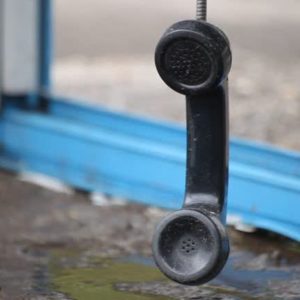 The Conversation I've Been Dreading: Ijeoma Oluo Talks About Race with Her Mom When my white mother gave birth to me, and later my brother, in Denton, Texas, she became the subject of a lot of racial...
© LitHub
Back to top