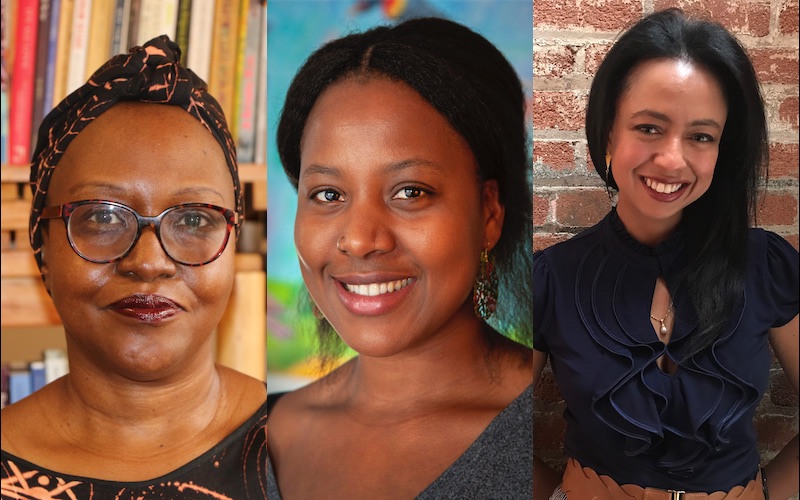 Hear from the authors shortlisted for the Caine Prize for African Writing.

The AKO Caine Prize for African Writing is a literature prize awarded to an African writer of a short story published in English. The prize was launched in 2000 to encourage and highlight the richness and diversity of African writing by bringing it to a wider audience internationally. The focus on the short story reflects the contemporary development of the African storytelling tradition.

The five shortlisted stories for the 2021 AKO Caine Prize for African Writing were chosen from submissions spanning over 22 countries and the shortlisted authors come from Ethiopia, Kenya, Namibia and Uganda. They are Doreen Baingana, Meron Hadero, Rémy Ngamije, Troy Onyango and Iryn Tushabe. This year’s Judging Panel deliberated the stories and chose the shortlist virtually.

The winner will be revealed via a virtual announcement on the AKO Caine Prize’s YouTube channel on Monday July 26 at 5:00pm BST.

Below, three of the shortlisted authors answer our questions on craft, reading, and the best short stories they’ve ever read. And you can read their shortlisted stories here.

Iryn Tushabe: I’m not picky. I used to be when my kids went to school and I had a whole day in front of me to do with as I pleased. But last year when the novel coronavirus brought the world to its knees, we put the kids in online school and suddenly that’s all there was time for. I tried, sometimes, to wake up very early and do some writing before my household stirred awake but this wasn’t always possible; I’m not an early morning person. But now school is out for the summer and I can set aside an hour or two of uninterrupted writing. I’m realizing, too, that it wasn’t a bad idea to allow myself to fallow. I feel fresh and more productive now.

Meron Hadero: Mornings are my favorite time for writing. I find I have more creative energy then, and I love starting the day working on a story.

How do you tackle writers block?

Iryn Tushabe: There are days when writing is truly a grind and I feel that perhaps I don’t have what it takes to be a writer. Or that I’m not the right vessel from which the story I’m trying to tell should be flowing. But even on my best days, writing doesn’t always come easy. Haruki Murakami says it well: “I have to pound the rock with a chisel and dig out a deep hole before I can locate the source of creativity.” Even so, there’s nothing else I’d rather be doing. The deep love I have for storytelling gets me through the tough days. I get to sit alone for hours ‘speaking’ in my own voice, refusing to repeat the words of others. It’s an act of great faith, and I feel fortunate to possess such faith.

Doreen Baingana: I use the timed writing exercise I first read about in Writing Down the Bones by Natalie Ginsburg. With an idea in mind, I set the timer, say for 30 minutes, and write as fast as I can without stopping for any reason, and especially not to edit. I go wherever the words take me until the timer goes off. It works to get me started, to shut down my doubts, and to ignore my editor until I need her. And at the end, I have a few pages to start with, which is always the hardest part for me.

What helps me too is to journal writing. I write down all my fears about a particular project, or life in general (like, what’s the point when people are dying of COVID?) instead of trying to stamp them out. I give them air to breathe and then respond to them one by one (like, why not leave something behind before I die too). Once the fears and doubts are out of my head, I am free to focus on the work itself.

Iryn Tushabe: Three years ago, I took a graduate certificate course in Creative Writing from the Humber School for Writers. My mentor, Alissa York, is the best writing instructor I’ve ever had. She told me once, and I’m paraphrasing here, that a gorgeous rosebush is not gorgeous from the start. In the beginning a seed is sown and given the right conditions to grow. There’s the regular tending to—the fertilizing, the watering, the pruning. And don’t forget the uncontrollable factors, like weather. It’s a process. As a writer and sometimes-gardener, this analogy has stuck with me. I think this is what seasoned writers mean when they say to trust the process.

Doreen Baingana: I can’t remember where I first read this quote: “The artist never entirely knows. We guess. We may be wrong, but we take leap after leap in the dark.”

It’s by the ballet dancer and choreographer Agnes de Mille. It soothes my anxieties about not really knowing what I’m doing. It gives me permission to guess, to be wrong even, and yet still keep on leaping. I love the graceful image, ‘leap after leap’, which brings to mind rising and falling; the very attempt and failure is the artistry. I love the repetitiveness of it, which is what we do as writers, again and again. Exploring the dark sounds scary but that’s were treasure is found.

Meron Hadero: The best writing advice I’ve received is not to be too quick to judge a first draft. Some stories take time to emerge, to find you, to find themselves. This advice has helped me keep faith in certain pieces that didn’t come quickly, but that needed my patience and belief.

Doreen Baingana: I confess I rarely re-read books, it’s poems that I return to. However, I’ve been fascinated by Olive Kitteridge by Elizabeth Stout over the last few years. Olive is one of the most intriguing fictional characters I’ve encountered: rather despicable and yet endearing. I return to study how Stout conjures her magic but get spell-bound all over again, forgetting my mission. Her language is delicious and the world she creates is so true in its mix of the banal and the poignant. I could go on and on.

Which non-literary piece of culture—film, TV show, painting, song etc—could you not imagine your life without?

Meron Hadero: Music, which is a deep source of inspiration. I’m lucky that my sister is a musician so it’s very much part of my life.

How do you know when a story is finished?

Iryn Tushabe: I don’t always know when a story is finished. It’s a problem I’ve encountered several times, writing way past the ending and agonizing about where the story is going. Lately I’ve started showing such stories to my partner, Robin Schlaht. He’s a writer himself—poetry, screenplays, and lately, plays—and a filmmaker. He’s quite unforgiving. He takes a pencil to my stories like a butcher wielding a knife.

Doreen Baingana: I don’t—until it’s accepted for publication. There’s a point before I submit a story when I realize I’m merely changing the punctuation back and forth; that’s when I know I’ve done what I can do with it, for now. So I submit it and if it’s rejected, that has given me three months or more away from it, so with fresh eyes I can revise or simply tweak it and send it out again. And repeat until it finds a home.

Meron Hadero: I’m not sure a story is ever truly finished. I’m learning this as I’m working on edits for my upcoming debut book of short stories, A Down Home Meal for These Difficult Times. I’m still revising stories that have been published in magazines years ago.

Iryn Tushabe: Oh gosh. Where to start? I read tons of short stories, especially in the years since I’ve been working on my novel. I like to have a sense of completion, to read the whole thing in one sitting. So, if you don’t mind, I’ll tell you instead about the best short story I’ve read recently. “This is What the Journey Does,” by Maaza Mengiste. It has that quality of every story I have ever loved, the understanding at its core that time is discontinuous. There’s solitude in it too which I simply adore. Reading this story reminded me of the idea that thought is a way, perhaps the only way, to time-travel.

Doreen Baingana: What an unfair question! How the best short story collection I’ve read in the last few years? “What It Means When a Man Falls from the Sky,” by Lesley Nneka Arimah (who won the Caine Prize in 2019). Pure brilliance.

Meron Hadero: That’s a tough question, maybe an impossible one for me to answer. But the best short stories I’ve read recently are by my fellow finalists. They’ve written brilliant pieces that touch on important themes with such distinct voices. I recommend them all to anyone looking for a short story to read.

Doreen Baingana is a Ugandan writer. Her short story collection, Tropical Fish, won the Grace Paley Prize for Short Fiction and the Commonwealth Prize for Best First Book, Africa Region. Two stories in it were nominated for the Caine Prize (2004 & 2005). She has also published two children’s books as well as stories and essays in numerous international journals. Other awards include a Miles Morland Scholarship, a Rockefeller Bellagio Residency, a Tebere Arts Foundation Playwright’s Residency, and in 2021, a Sustainable Arts Foundation grant. She co-founded and runs the Mawazo Africa Writing Institute, based in Entebbe, Uganda.

Meron Hadero is an Ethiopian-American who was born in Addis Ababa and came to the U.S. via Germany as a young child. She is the winner of the 2020 Restless Books Prize for New Immigrant Writing. Her short stories have been shortlisted for the 2019 Caine Prize for African Writing and published in Zyzzyva, Ploughshares, Addis Ababa Noir, McSweeney’s Quarterly Concern, The Iowa Review, The Missouri Review, New England Review, Best American Short Stories, among others. Her writing has also been in The New York Times Book Review, The Displaced: Refugee Writers on Refugee Lives, and will appear in the forthcoming anthology Letter to a Stranger: Essays to the Ones Who Haunt Us. A 2019-2020 Steinbeck Fellow at San Jose State University, she’s been a fellow at Yaddo, Ragdale, and MacDowell, and her writing has been supported by the International Institute at the University of Michigan, the Elizabeth George Foundation, and Artist Trust. Meron is an alum of the Bill & Melinda Gates Foundation where she worked as a research analyst for the President of Global Development, and holds an MFA in creative writing from the University of Michigan, a JD from Yale, and a BA in history from Princeton with a certificate in American Studies.

Iryn Tushabe is a Ugandan-Canadian writer and journalist. Her creative nonfiction has appeared in Briarpatch Magazine, Adda, and Prairies North. Her short fiction has appeared in Grain Magazine, the Carter V. Cooper Short Fiction Anthology, and in The Journey Prize Stories 30. The winner of the 2020 City of Regina Writing Award, she’s currently finishing her debut novel, Everything is Fine Here.