VIA Library of America

“He Comes for the Girls.” Philip Roth on Getting Kicked Out of Prague

A Diverting Anecdote from a Grim and Unamusing Epoch

From 1972 through 1977, I traveled to Prague every spring for a week or ten days to see a group of writers, journalists, historians, and professors there who were being persecuted by the Soviet-backed totalitarian Czech regime.

I was followed by a plainclothesman most of the time I was there and my hotel room was bugged, as was the room’s telephone. However, it was not until 1977, when I was leaving an art museum where I’d gone to see a ludicrous exhibition of Soviet socialist realism painting, that I was detained by the police. The incident was unsettling and the next day, heeding their suggestion, I left the country.

Though I kept in touch by mail—sometimes coded mail—with some of the dissident writers I’d met and befriended in Prague, I was not able to get a visa to return to Czechoslovakia again for 12 years, until 1989. In that year the Communists were driven out and Václav Havel’s democratic government came to power, wholly legitimately, not unlike General Washington and his government in 1788, through a unanimous vote of the Federal Assembly and with the overwhelming support of the Czech people.

Many of my hours in Prague were spent with the novelist Ivan Klíma and his wife, Helena, who is a psychotherapist. Ivan and Helena both spoke English and, along with a number of others—among them the novelists Ludvík Vaculík and Milan Kundera, the poet Miroslav Holub, the literature professor Zdenek Strybyrny, the translator Rita Budínová-Mlynarová, whom Havel later appointed his first ambassador to the U.S., and the writer Karol Sidon, after the Velvet Revolution the chief rabbi of Prague and eventually of the Czech Republic—these friends gave me a thoroughgoing education in what unstinting government repression was like in Czechoslovakia.

This education included visits with Ivan to the places where his colleagues, like Ivan stripped of their rights by the authorities, were working at the menial jobs to which the omnipresent regime had maliciously assigned them. Once they had been thrown out of the Writers’ Union, they were forbidden to publish or to teach or to travel or to drive a car or to earn a proper livelihood each at his or her preferred calling. For good measure, their children, the children of the thinking segment of the population, were forbidden to attend academic high schools rather as their parents who were writers were officially ousted from literature.

Some among the repudiated whom I met and spoke with were selling cigarettes at a street corner kiosk, others were wielding a wrench at the public water works, others spent their days on bicycles delivering buns to bakeries, still others were washing windows or pushing brooms as a janitor’s assistant at some out-of-the-way Prague museum. These people, as I’ve indicated, were the cream of the nation’s intelligentsia.

So it was, so it is, in the clutches of totalitarianism. Every day brings a new heartache, a new tremor, more helplessness, more hopelessness, and yet another unthinkable forfeiture of freedom and free thought in a censored society already bound and gagged. The usual rites of degradation prevail: the ongoing unmooring of one’s personal identity, the suppression of one’s personal authority, the elimination of one’s security—a craving for solidity and equanimity in the face of ever-present uncertainty and the seeming unreality of it all. Unforeseeableness is the new norm and perpetual anxiety the injurious result.

And to enhance the disgrace, anger appears in all its scorching monotony. Beset by the torture of anger. The maniacal raving of a manacled being. Frenzies of futile rage ravaging only oneself. Alongside your spouse and your children, imbibing the tyranny with your morning coffee. Totalitarianism’s remorseless trauma-inducing machine cranking out the worst of everything and, over time, over the desperate days and months and years of waiting for the disaster to end, everything becoming more than one’s  endurance can withstand.

One diverting anecdote from a grim and unamusing epoch and then I’ll be done.

On the evening of the day following my escapade with the police, when in haste I wisely left Prague for home, Ivan was picked up from his house by the police and, not for the first time, questioned by them for hours. Only this time they did not hector him all night about the clandestine seditious activities of Helena and himself and their cohort of troublesome dissidents and disturbers of the unlawful peace. Instead—in a refreshing change for Ivan—they inquired about my annual visits to Prague.

As Ivan later told me in a letter, he had only one answer to give them throughout their dogged nightlong  inquisition about why I was hanging around the city every spring.

“Don’t you read his books?” Ivan asked the police.

As might be expected, they were stymied by the question, but Ivan quickly enlightened them.

“He comes for the girls,” Ivan said. 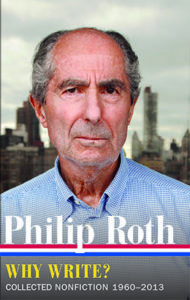 From Philip Roth: Why Write? Collected Nonfiction from 1960-2013. Used with permission of Library of America. Copyright © 2017 by Philip Roth.

Philip Roth is the author of 31 books, including the Pulitzer Prize–winning American Pastoral. 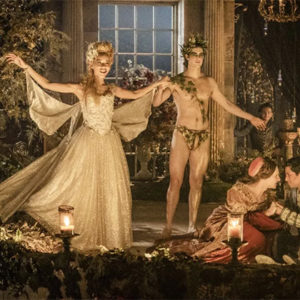 In the first episode of TNT’s Will, a young, hot William Shakespeare arrives in the big city of London, bright-eyed and ready...
© LitHub
Back to top
Loading Comments...