The TV Adaptation Makes Up For Where the Author Fell Short

Just one episode into HBO’s The Plot Against America I am ready to pronounce it Better Than Any Cinematic Adaptation of Any Philip Roth Novel Ever Made! If you know your Roth, this might seem like faint praise. That’s because every previous attempt to convert his prose into film has been a critical and commercial disappointment (the only possible exception being Isabelle Coixet’s visually lyrical Elegy, based on The Dying Animal).

Why is that? It might be because Roth is a writer who goes deep—way deep—into the frenzied minds of his usually male heroes. How does one take what Zadie Smith called Roth’s “motormouths” (and motorminds) and let them sputter on screen for hours on end? To be faithful to that sort of interiority, as showrunner David Simon told The New York Times, requires a voice-over. “You can count on two hands,” Simon sighs, “the number of good voice-over films.”

The perennial dilemma for filmmakers is that “voice” is one of Roth’s great strengths. Here is John Cheever in a personal letter to Roth now entombed in the Library of Congress: “Roth—whoever he was—had the most compelling voice I had encountered in years. I don’t mean style; I mean voice—something that begins at around the back of the knees and reaches well above the head.” (And if you’re experiencing the pleasure of recognition, yes, he likely grafted that tribute to himself, word-for word, into The Ghost Writer of 1979.)

Simon mutes the recently departed author’s compelling voice in two clever ways. First, he divests himself of the novelist’s hovering, ubiquitous presence. In the original, the story is recounted by someone who goes by the name of “Philip Roth.” Our author first experimented with this kind of autofiction during the early 1970s. He ramped up the “Me” in the late 1980s and just went wild in the 1993 Operation Shylock. The latter is an autofictional orgy that features not just one, but two characters named Philip Roth. Critics, who long accused the author of writing autobiography thinly veiled, revolted. John Updike delivered a review so scathing that Claire Bloom alleges it drove her ex to a mental institution. For eleven years thereafter, Roth eased off the autofiction. And then it, and “Philip,” returned in the 2004 Plot Against America.

What Simon’s de-Rothified adaptation made clear to me is how unnecessary the autofictional narrative device was in the first place. Nothing is lost by naming the young boy Philip Levin. Which brings us to Simon’s second masterstroke: focalizing the narrative through various members of the Levin (formerly the Roth) clan, as opposed to just Philip.

By silencing the voice of the character (and author) Philip Roth, Simon liberates himself to focus on the countless, rich ideas in the story—and in all due respect to Cheever, Roth’s ideas are as compelling as his voice. I think Roth had a strong insight; not about George W. Bush (as critics surmised back in 2004), nor about the coming of Donald J. Trump (as many believe now). Rather, what he saw with abundant clarity was the sturdy presence of a certain type of American.

These Americans, as we learned in his chapter “Loudmouth Jew,” were white, Christian and inclined to believe that all others in this country should know their place, or, preferably, not be here at all. Roth wasn’t a flawless social critic; Stanley Crouch, in an excellent review, faulted his friend for absenting the persecution of blacks from his doomsday narrative. But when it came to describing this type of white, Christian, American, Roth was spot on.

That the great author might be standing in the way of his own legacy is something that David Simon and his talented crew appear eager to rectify.

A Roth novel is preternaturally crammed with provocations and intuitions. The standard 90-120 minute film just can’t do justice to them. When it comes to adapting Roth, long-from television smites the major motion picture. With six hours at his disposal, Simon appears poised to break the curse. He has time, for example, to show us jarring montages of wartime footage, drawing out an underappreciated theme of the novel; namely, that news back then was often disseminated in movie theaters, houses of entertainment.

As for the look of the series, it is shot in a resplendent style—call it 1940s nostalgia vision. The interior scenes look like they were filmed through a camera lens slathered in honey. As for the characters themselves, Simon has interpreted them cleverly. Roth was well aware that southern Jews, uh, differed from their northern co-religionists. In the novel, traitorous Rabbi Lionel Bengelsdorf warmly invokes Judah Benjamin and the Confederacy. In the series, Simon outfits the rabbi (played by John Turturro) with a drawl so thick it makes Foghorn Leghorn sound like William Buckley Jr.

Of all Simon’s decisions to betray the original, it was his treatment of women which is most notable. Ever since Portnoy’s Complaint was published in 1969 Roth has had a reputation of sketching one-dimensional female characters and trafficking in misogyny. That debate has raged for decades. Here, I simply note that no greater challenge to Roth’s commercial future exists than getting a female readership to overcome the man’s “rep”—sometimes deserved, sometimes not—and pick up one of his 29 book-length works of fiction. They will decide for themselves.

HBO’s version, for its part, does not seem so far like it would fail the Bechdel Test. Zoe Kazan, playing Mama Levin, navigates the world as a Jewish woman caught in between old traditions and the massive secularizing turn which is about to transfigure American Judaism. In one of the episode’s only false notes, her lighting of Sabbath’s candles is interrupted by two Orthodox Jews who come to her door and collect for charity. (Roth claimed he never saw a skull-capped co-religionist in his Weequahic neighborhood. Further, anyone who lives in an orthodox neighborhood understands that religious Jews are never on the streets during Sabbath sunset.)

Simon appears poised to actually develop these women characters, yet another betrayal of the master’s original. The opening scene of Plot Against America shows Philip chalking (writing?), scurrying about, and subsequently shambling directly into a girl’s hopscotch game. “Philip, move, you’re in the way!” screams the girl. That the great author might be standing in the way of his own legacy is something that Simon and his talented crew appear eager to rectify. 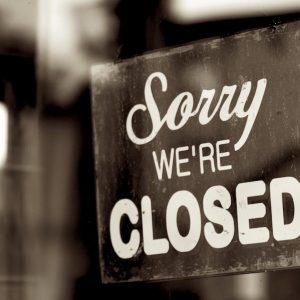 Like most of my bookselling peers, I’ve been on the edge of many emotions the past ten or so days. Fright at the severity...
© LitHub
Back to top