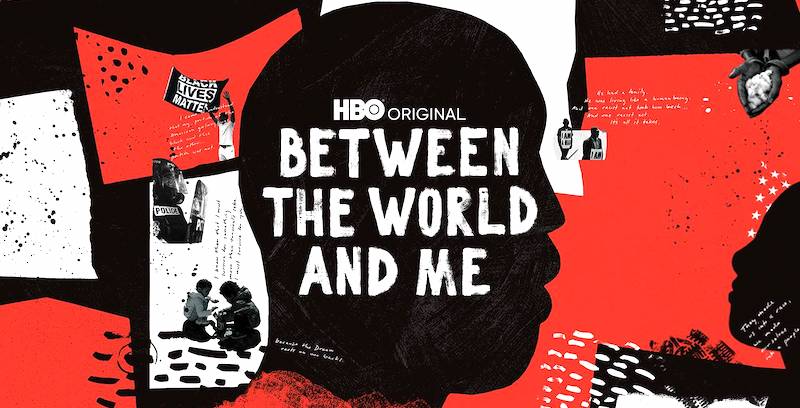 HBO’s Between the World and Me is a cinematic collage of poetic declamations.

This year has been nothing less than a series of surprises, revelations, and great reminders of the insidious tapestry of the United States. Antiblackness, police brutality, corrupt healthcare systems, eviction crises, transphobia, poverty (i.e. capitalism), general precarity—these have been the longstanding conditions and circumstances for millions of people in America (and the world, really), and were only amplified during the COVID-19 pandemic. Yet, there were also crucial sites and moments of resistance: Following the murder of George Floyd and Breonna Taylor, we saw the largest protests against police brutality in history, along with reinvigorated calls for greater discussions and actions against anti-Black racism and its concomitant arenas of inequality.

Some of these calls have resulted in more people turning to anti-racist reading (which, of course, has had its small wins and disappointing shortcomings), and Ta-Nehisi Coates’ Between the World and Me was on a lot of those lists. Coates’ book, first published in 2015 just a month after the Charleston Church massacre, is formally a letter addressed to Coates’ son, in which Coates charts his early life in West Baltimore, his time as a student at Howard University, his heartbreaking losses, and his anxieties of being a Black parent in America. In the midst of recounting such hard topics as a close encounter with a gunman in his youth and losing a dear friend to police violence, Coates showcases his rhetorical powers with stunning clarity—his language is near (if not, totally) poetic and captures the tenuousness of Black life, many of its perplexing contradictions, with all of its joy and beauty.

Not surprisingly, the poetic tenor of Between the World and Me makes it perfect for performance. In 2018, Kamilah Forbes directed the first staging of Coates’ book at the Apollo Theater and later at the Kennedy Center. And just last August, she brought together an esteemed coterie of actors—Mahershala Ali, Angela Bassett, Jharrel Jerome, Wendell Pierce, Tariq “Black Thought” Trotter, Angela Davis, Oprah Winfrey, Tip “T.I.” Harris, Courtney B. Vance, and many others—to direct a cinematic version of Between the World and Me.

The 90 minute film, which premiered on HBO on November 21st, was shot with the actors in a number of different locations—in their homes, cars, backyards, Howard University—as they recite passages from Coates’ book. These monologues are shown in between cuts of archival images and videos, artful animations, and contemporary clips, to augment the stakes of Coates project—as one example, the moment in which Coates narrates the precarity of his childhood in West Baltimore is cut against the visual iconography of the American dream (i.e. Brady Bunch, white adolescence, suburban life). But there are also clips of Malcolm X speeches, along with the late Chadwick Boseman delivering his commencement address to Howard’s graduating class of 2018.

Though each of the actors reads Coates’ very personal letter to his son, over the course of the film the text of Between the World and Me becomes a shared burden and a collective chorus. Coates’ book is acutely concerned with questions of the Black body, so it is no surprise that the film itself feels so tactile, that we are made to feel aware of the uncertain existence of Black being in the United States, just as we are also made to be aware of the unique differences within Blackness (i.e. queerness, trans identity, etc.). Though one’s experience of anti-Blackness might vary, there is in fact a uniformity in oppression; and this is most clearly understood at the very beginning of the film when the very address is personalized (some actors say “Dear daughter” or “Dear brothers” instead of “Dear son”), or even when Mahershala Ali sheds a tear after a particularly gutting passage.

It might seem a bit sad to think that after five years, during which we saw the rise of—and endured—a Trump presidency, Coates’ book, which to some feels a bit outdated, remains as prescient as ever. But in fact, it is a testament to the larger networks of power that circulate and the unending project of the fight for a better future. The film closes with a heartbreaking piece from Breonna Taylor’s mother—a reminder too that the fight is not just for the future but to defend the dead.

In all, the film is beautiful, a message of loss and hope, but don’t just take my word for it: starting today through November 30th, HBO’s Between the World and Me is available for free at hbomax.com.